In the final days of 2018 my friend Michel asked me whether I wouldn’t want to join him on a mileage run in January, he needed to fly four flights on Aegean Airlines to keep his Star Alliance Gold Status. As I had the time and never flew them before I decided to tag along.

As his Gold status also gave him some upgrade vouchers from economy to business he used them to get us a taste of intra-European business Class on Aegean.

For our first flight, the upgrade was approved and we would be flying in business class on a rare multiple leg flight. During the winter season the Aegean flight from Brussels to Athens sometimes makes an additional stop in Strasbourg, today was one of such days and we got an extra start and landing for the same price.

As we were flying business class we could use the Brussels Airlines’ ‘The Loft’ lounge before departure in Brussels. Staying as long as possible in the lounge, boarding started as soon as we arrived at the gate. Thanks to the business class priority we were the first on the plane, warmly welcomed by a bright smiling crew.

As with most European airlines, the business class seats where similar to the ones in Economy Class featuring a 3+3 configuration with the middle seat blocked.

The back rest of the middle seat can be folded down to create a side table in between the two seats, useful to put small items like drinks on it. Legroom was more than ok, I was easily able to stretch out my legs under the seat in front of me.

The seat featured a coat hanger, a fold down table and two magazine pouches, one fixed above the table and one elastic in the knee area. In the magazine pouches you could find the inflight magazine ‘Blue‘, the in-flight shopping catalogue, an airsickness bag and of course the safety card.

Remarkably the business class on this flight was quite large with seven rows, showing why European airlines prefer this setup as it enables them to adjust the business class according to demand.  The crew came around offering Greek and English newspapers and a candy before take-off. 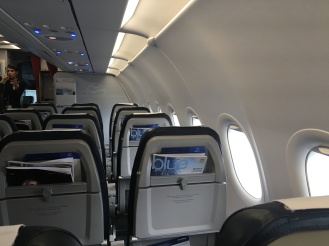 Boarding was very fast as we had only a very light load on our first sector, making is shoot up like a rocket from runway 25R upon take-off. The route took us over the Ardennes and Luxembourg along eastern France to land after only a short flight in Strasbourg.

On this short sector we were served a drink of choice, some sparkling wine for us, and some salted crackers. The glass used was one with a foot under it, something you rarely get inflight. 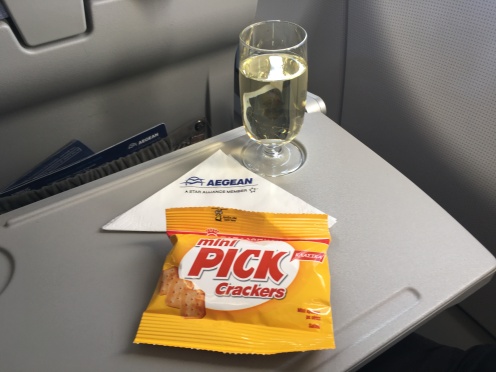 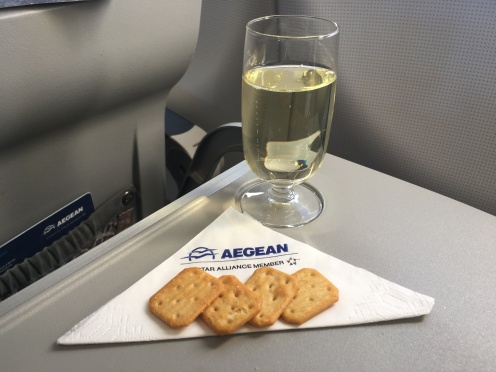 During our short layover in the small airport of Strasbourg we all stayed inside the plane and where able to spot some exotic traffic next to us.

During boarding of the additional passengers in Strasbourg we received a pre-departure beverage with a choice between water, sparkling wine and orange juice. Obviously we selected the delicious sparkling wine again. The crew also distributed the menu, showing us what would be served in the air.

Boarding was an interesting affair with most passengers seaming to know each other and going around saying “hi” to each other. Nevertheless boarding was completed on time and we received a candy before take-off.

Shortly after take-off the crew started with handing out hot towels followed by an aperitif drink service. This time we selected a gin & tonic, which was quite generous on the gin and of course accompanied by the salted crackers.

Whilst sipping on our gin-tonics we browsed through the menu, to see what would be on offer. Recently Aegean engaged some famous Greek chefs to create some modern Greek inspired dishes, they also offer the options of pre-selecting a main dish when flying in business class if you wish to. 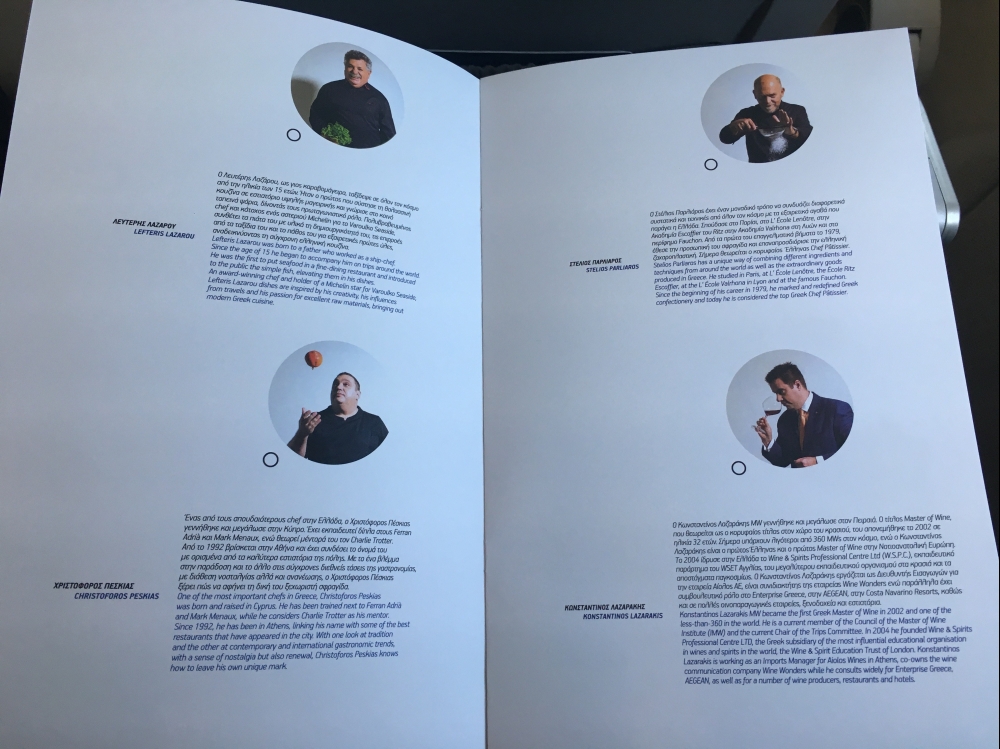 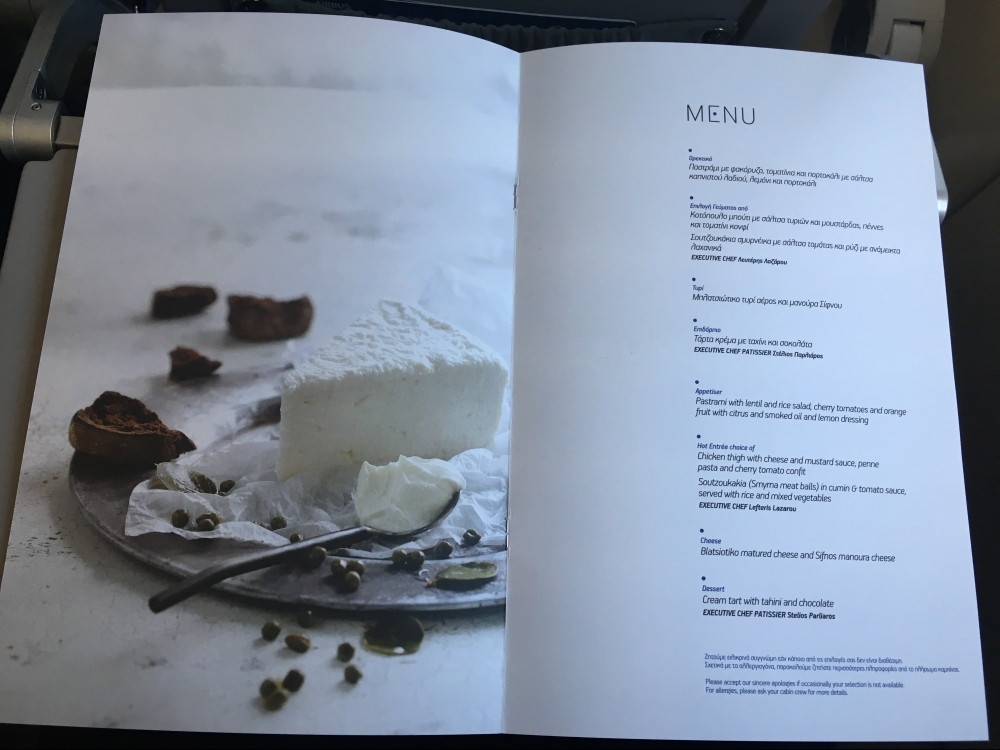 After receiving our aperitif the crew came around with tablecloths to put on our table, giving a fancier feel to the dining experience. 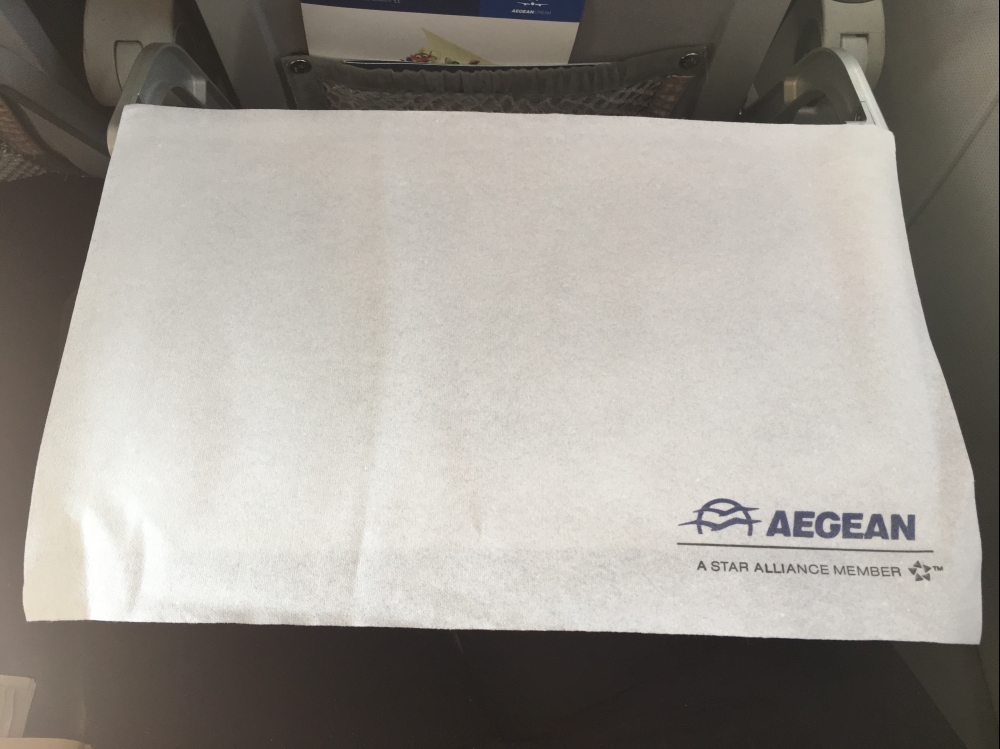 Unfortunately the next cart delivered a tray with the appetizer, cheese, salt and pepper, butter, crackers, a wet wipe and a napkin and metal cutlery. Putting the tray right on top of the table cloth, making it a bit useless. They also offered some freshly heated bread and another drink, this time I went for one of the Greek white wines, to go along with it. 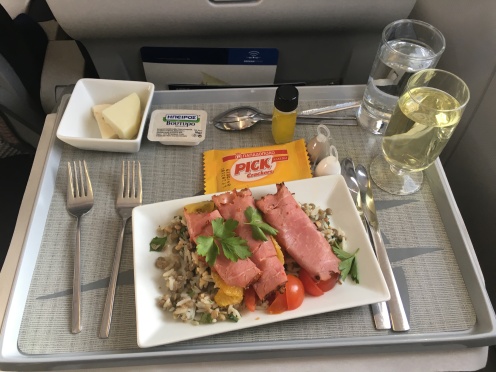 After you finished the delicious appetizer the crew came clearing the plates and delivered a hot main of your choice. On the menu you had two choices to choose from, but as we had pre-ordered ours online we were curious what we would receive. Whilst Michel had ordered the sea-bass which was not on the menu, he did receive a fish dish but it did not correspond to the one he ordered online.

I on the other hand ordered a lemon chicken with potatoes online, and was handed the chicken in a cheese sauce and pasta as was standard on the menu for this flight.

Luckily the dish was delicious, but it does make me wonder why Aegean gives you the option of ordering a meal beforehand when you are just given one of the standard meals on-board in the end? The idea behind it is nice, but most likely it still needs a bit fine tuning. Along with the main another round of warm bread was offered.

After finishing the main, the crew cleared away the trays, along with the table cloth. If you wanted a dessert you had to save your spoons beforehand from the tray. The dessert was served separately and consisted of a heavenly delicious chocolate cake.

A bit later the crew came around for hot drinks to join your dessert, as Aegean has a proper coffee machine on-board you can get different types of coffees made to order and not just poured like on most flights. As I am not a coffee drinker, I ordered a tea which was also served piping hot.

To finish off the meal service, the crew came around with some digestives and chocolates. We tried the Chios Mastiha, which was a delicious sweet alcoholic drink, served on the rocks.

After the meal service ended, the crew still had to rush to push the in-flight shopping service through the cabin as we were already above Greece, fast approaching Athens.

The flight routing took us from Strasbourg, over the Swiss and Italian Alps, down along the Adriatic coast to Greece. Giving us some splendid views of the snow topped Alps. 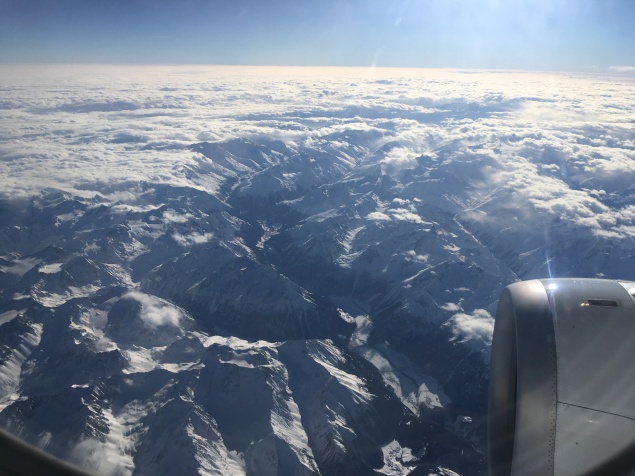 Right before we started descend, the crew came around with another offering of hot towels to freshen up.

Our approach gave another spectacular scenic view over Greece before touching down and taxiing all around Athens Airport before ending up on a remote stand.

In next to no time we arrived in the intra-Schengen arrival of the terminal, and after getting our connecting boarding pass at the transfer desk we headed onwards to our next flight.

Remarkably there is no airside transfer possibility in Athens Airport, so we head to exit the airside area through the baggage hall, go up one floor to departures and clear general security along with the originating passengers again. Luckily it was a very quiet time of the day and we cleared border and security checks in no-time and where able to relax at the Aegean Business Lounge in the A-gates area before our onward flight to Istanbul.