After our short night at the Hilton Garden Inn Istanbul Ataturk Airport we took the complimentary hotel shuttle back to the airport. As is usual in Turkish airports we had to pass through a security check before we could enter the airport terminal.

After arriving in the main departure terminal we looked for the Turkish Airlines business class check-in as we assumed that we would be able to check-in there for our Aegean Airlines flight as both airlines are part of Star Alliance. Unfortunately after queueing and finally reaching an agent we were told Aegean had its proper desks and we would have to wait an hour before they would open.

After going to drink a coffee we were amongst the first in the line to check-in and after receiving our boarding pass we passed through the fast-lane emigration and security and spent some time at the Turkish Airlines lounge before boarding.

Amazingly our flight left from a gate with a boarding bridge, so after a quick documents check we could walk on the plane. On this flight our upgrade didn’t clear so we would travelling down the back of the plane in economy. Boarding went surprisingly smooth for a nearly full plane and we pushed back almost on time. We got delayed a bit while taxiing to the runway and waiting for our turn to take-off, here the airport was really showing it was operating at maximum capacity.

While block time was a generous 1 hour 45 minutes, the actual flight time was only 50 minutes they just calculated the necessary waiting time on the ground in Istanbul. Before take-off the crew passed through the cabin with sweets, seems to be a Greek tradition of some sort.

The cabin was in a standard 3-3 configuration with most seats seemingly occupied, most likely with connecting passengers from Turkish Airlines. We lucked out in having an empty middle seat, so we had some more room to stretch out in our poor man’s business class.

During the flight I was surprised by the quite generous meal offering on this short 50 minutes flight, everyone received a cardboard box containing a hot cheese pastry and sweet sesame bar. You also got a hot and cold drink of choice. It is a pretty impressive service in economy on a short intra-European hop and it filled the spot quite nicely.

The flight was over in next to no time and once again we flew the scenic approach into Athens Airport. This time we parked at a terminal stand with a boarding bridge, unfortunately it was a gate in the Schengen area so we had to deboard through stairs and where bussed the few metres to international arrivals to clear immigration and customs into Greece. 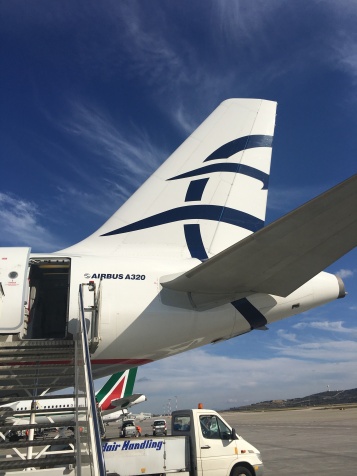 Once again there was no airside transfer possibility, so we had to exit through baggage claim and the arrivals hall before climbing up one level to departures and re-clear security there. The rest of our transfer time we spent exploring the lounges of Aegean and Lufthansa in the Schengen area of the airport.

Boarding for our final flight to Brussels would be from a boarding bridge gate in the main terminal, so we walked there from the lounge at the indicated boarding time. Boarding was slightly delayed, but when boarding started priorities where strictly enforced and anyone trying to sneak in early was sent back to the rear of the line.

This time I was seated in the ‘Holy Grail’ seat 1A, the seats on row one are somewhat smaller because of the tray table stowed in the armrest. This table can be extended and unfolded to be used in either full or half width. 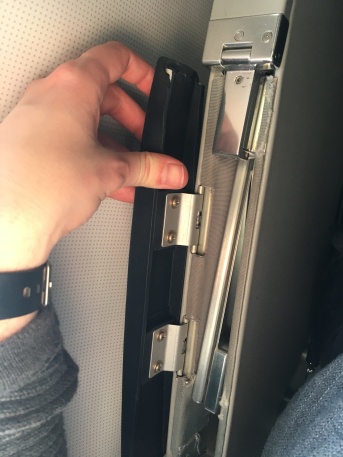 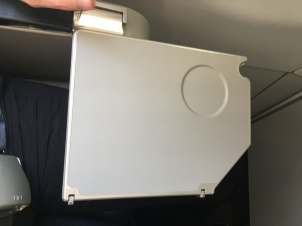 The legroom is nice but because of the fixed bulkhead you are limited in how far you can stretch out your legs, travelling in row 2 is better as this enables you to stretch out under the seat in front of you. 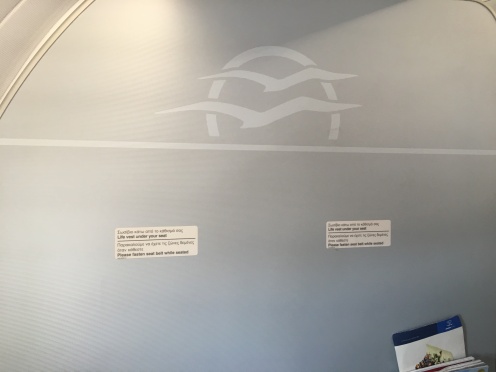 During boarding we were presented with a choice of pre departure beverages and we picked some sparkling wine.

The entire time I could hear a loud humming sound from a diesel generator outside of our plane, providing the plane with power. I thought this to be a bit odd, especially when one of the engines was started on the stand before push-back commenced. Of course before take-off we once again received the obligatory sweets.

After take-off we received another aperitif, I wanted to try out the Ouzo as was mentioned on the menu but something went wrong as it wasn’t loaded on this flight so I ordered some sparkling wine and water instead, receiving some sparkling water in the end accompanied by the salted crackers.

As there was only a light load in the small 2 row business class cabin the purser was working the cabin alone, straight from the galley without using trolleys. Starting out with laying out the table cloths before handing out the pre-plated trays with the appetizer, cheese, crackers, salt, pepper, butter and the napkin containing the metal cutlery.  Some warm bread was offered to accompany the appetizer and main. 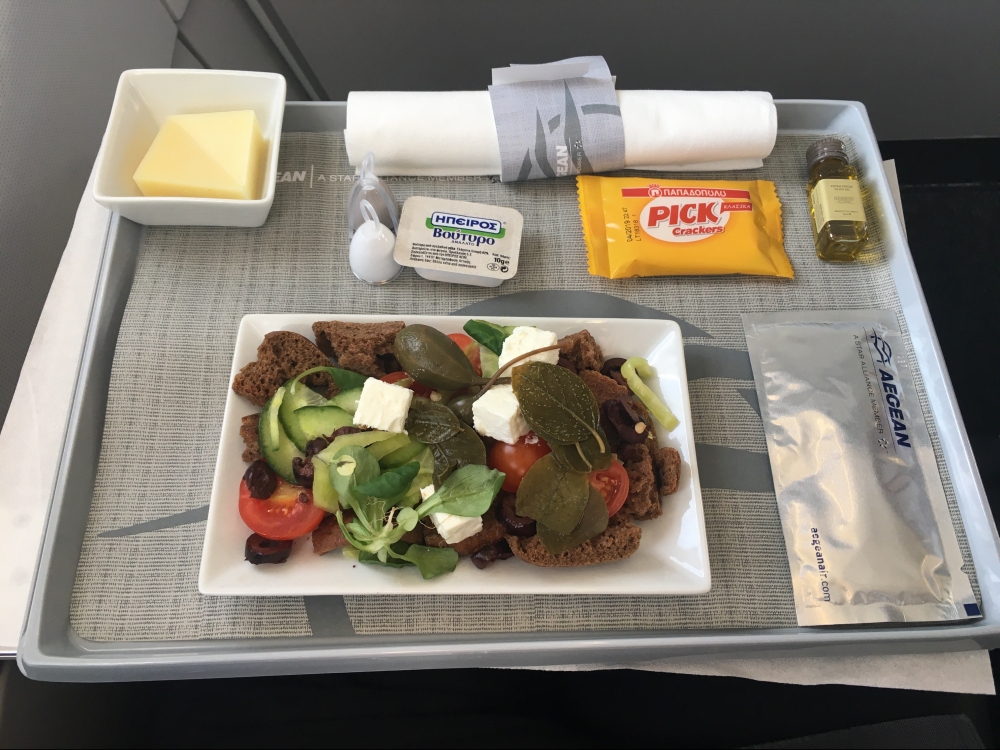 This time a different menu was offered on the flight, but as I ordered my fish meal beforehand through the Aegean gastronomics programme online I was wondering how it would be. This time the flight attendant proactively came to check with us whether we indeed ordered our meal beforehand.

After clearing the delicious appetizer I received a main of fish, but it was the fish as presented on the menu of the flight and not the one like ordered on the website, a similar story to our flight from Brussels to Athens. This makes we wonder why Aegean lets you pre-order a meal if they than do not deliver that meal to you? This is a small point that could be worked on some more. The meal was delicious as usual, so no complaints there.

After finishing the main, the pursers clear the tray inviting us to keep the spoons for dessert. She did not take away the table-cloth, so we could still use it to put our dessert on it. Once again a delicious sweet honey drizzled caked finished off the meal, accompanied by a freshly brewed green tea.

After the meal service we were offered a digestive and some chocolates, I opted again for the Chios Mastiha, which was unfortunately served without ice this time.

AS the purser worked the entire meal service in Business Class on her own she did a really good job, but she could have been a bit more proactive in offering drinks as we had on our earlier flights.

Flying northbound we could see a nice sunset and all too soon we touched down in a cold Belgium again, marking the end of a short but fun mileage run. As we reached the gate and the engines turned off, the entire plane went completely dark.

Aha! that was the reason for the diesel generator in Athens, the plane’s APU was out of service! Because everything went dark the fasten seat-belts signs also went out and everyone promptly stood up and gathered it’s belongings in a pitch dark cabin, despite the captain saying to remain seated until the airplane was connected to ground power and the lights turned back on.

Soon we where let off the plane and could start walking all the way from the end of Pier A to the arrivals hall.

I was really impressed by the quality and service provided by Aegean Airlines and I can recommend flying them if they have a routing suiting your plans.

Have you ever flown on Aegean or an intra-European business class? How was your experience and what did you think of it? Let us know in the comments below!