After seeing some travel vlogs about travelling across the USA with Amtrak Timothy and me decided to try it out for ourselves in 2016. As we would be flying to Chicago to start our trip and flying back from Los Angeles at the end we had to look at some more expensive ‘open-jaw’ (meaning flying to one place, returning from another on the same ticket) flight options. The cheapest and most interesting offer came from SAS, the Scandinavian flag carrier. As SAS markets their economy class as ‘low-cost’, even on long-haul, we were curious how our experience would be like.

The first leg was a standard intra-European flight from Brussels to Copenhagen. Check-in in Brussels was next to the Air Baltic check-in desk to Riga and our bags where tagged and sent on their way to Chicago. About the flight itself was not much to report, it was a plane with a typical intra-European all economy lay-out in a 3-3 configuration with slim-line seats. During the flight we were served a complimentary cup of tea or coffee, anything else could be bought on board from the buy on board menu. Even though SAS was one of the first European flag carriers to introduce a buy on board concept for their short-haul flights they still serve you a complimentary tea or coffee as opposed to most other airlines that don’t serve anything complimentary anymore. After a short and smooth flight we touched down at Copenhagen Kastrup Airport, the main base for SAS intercontinental flights. 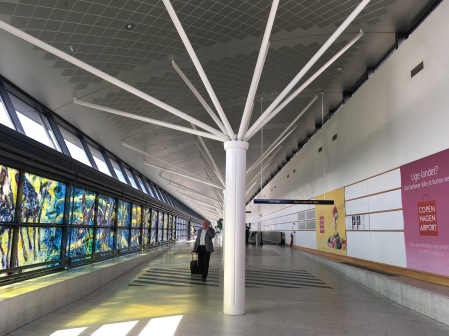 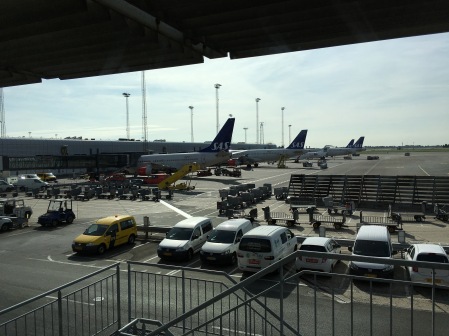 After a short stroll through the airport terminal and our obligatory visit of the LEGO-store (when in Denmark …) we headed for the SAS lounge. SAS offers lounge access even for their Economy passengers when buying a day pass either online during check-in or at the lounge entrance. This is only possible when flying on a SAS flight with a SAS ticket in one of SAS’ own lounges. As we had a rather long stopover of over three hours we decided to try out the lounge, to relax a bit more in a quieter environment before continuing our journey. There was also a small healthy buffet with Scandinavian style food, like a vegetable soup, some different kinds of cold vegetable salads, smoked salmon and of course some knäckebröd. The highlight however was the block of cheese of which you could slice off as many slices as you wanted with the cheese slicer it was put into. 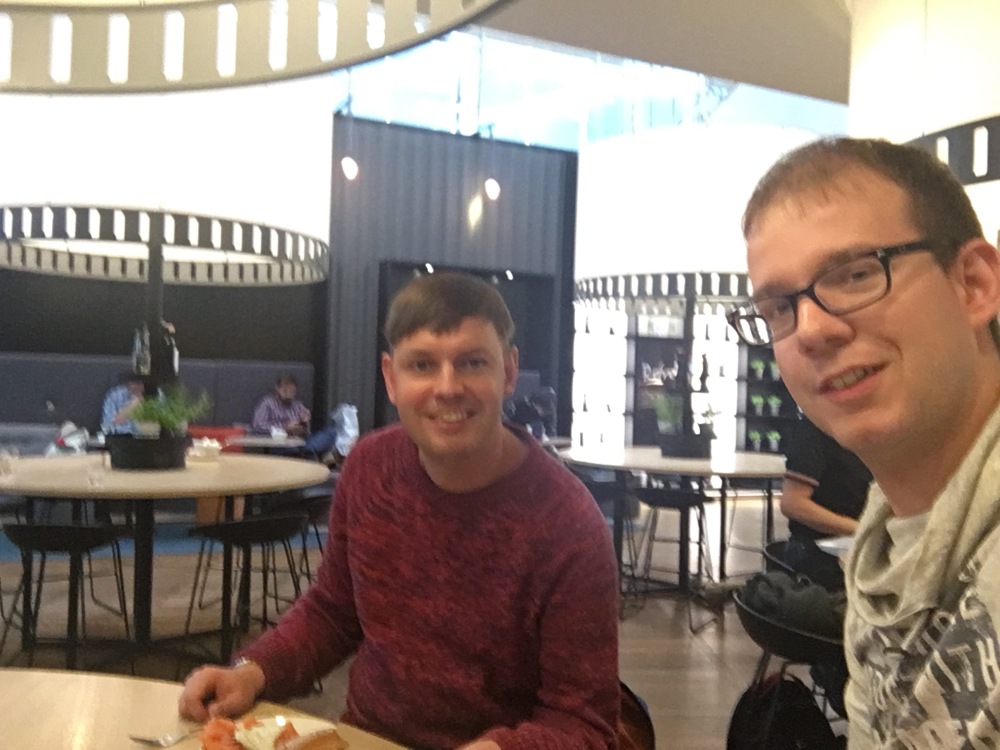 The downside of the lounge however is that there is only one SAS lounge in Copenhagen, located in the intra-Schengen sector of the airport. As our flight to Chicago would be leaving from the extra-Schengen sector we had to leave the lounge slightly earlier to make sure we would have enough time to pass through passport control and the extra security at the gate for US-bound flights.

After Timothy got his ‘special treatment’ from the extra security team at the gate we were ready to board the bird that would be flying us across the Atlantic Ocean. I was very happy that SAS would be using one of their older A340 planes for this, as it is getting quite rare to be flying four engine long-haul planes nowadays.

Inside the plane we could clearly see the plane had recently had a complete cabin refurbishment as all the seats where brand new and very comfortable to sit in with sufficient padding. My only pet-peeve being the small amount of legroom, but we knew this in advance as SAS markets their Economy as ‘low-cost’. On the seat there where some in-ear headphones, a pillow, a light blanket and a water bottle.

During the flight we first received a bar service where we could select one complimentary soft drink, this was followed by the main meal. For the main meal there was no choice, just one option, some chicken with broccoli and rice. On the tray was also a salad with a separate dressing, a bread roll, some knäckebröd, butter, a cheese triangle and small cake for dessert. After the meal the crew came round with some complimentary coffee or tea. All in all the meal was very tasty and filling and one of the better airplane meals I’ve had in economy.

During the flight there were no complimentary snacks or drinks, but you could buy some small items like crisps or instant noodles from a buy on board menu (which was very popular with a school group on-board). However the crew did come around frequently with complimentary water rounds, to make sure you wouldn’t become dehydrated. The entertainment system offered enough options to keep yourself entertained during the long flight and I watched my first LEGO movie here.

Shortly before landing we were served a hot pre-landing snack consisting of a roasted red pepper and sweet tomato lattice pastry, a small chocolate and an apple juice. The crew also came around with some complimentary coffee and tea. 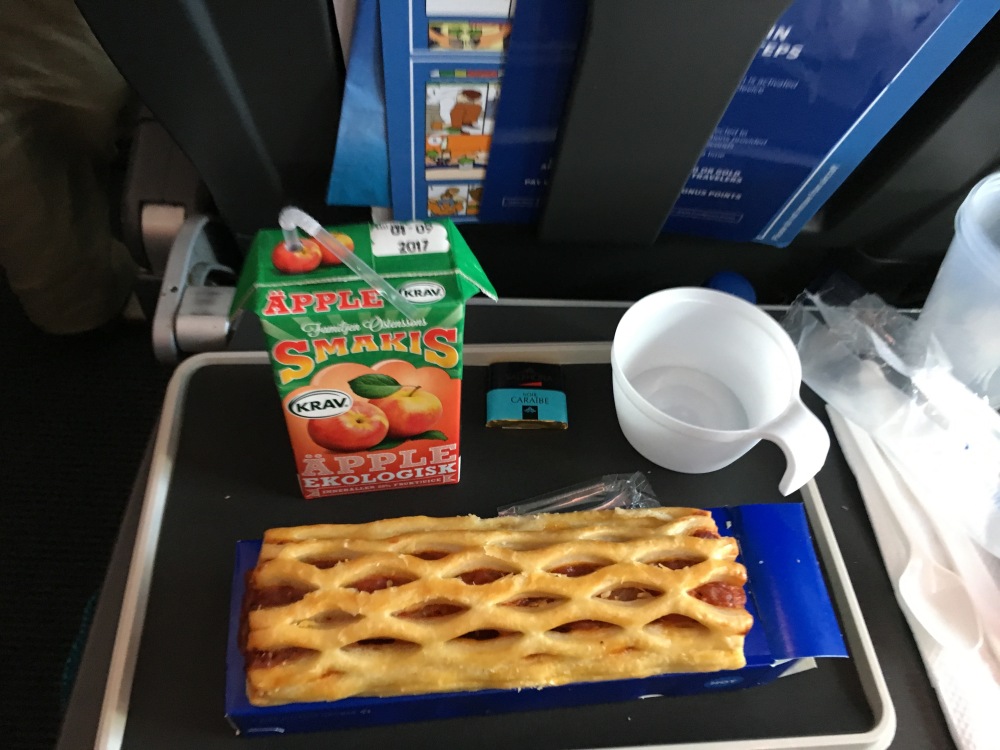 After landing we joined the big queue for immigration into the USA, as it took quite a while to get through all our bags where already standing at the side of the belt for collection. All of our bags? Well Timothy’s bag was there, but mine was nowhere to be found…
My first thought was “oh no, someone took my bag by mistake”, but when we got to baggage services the very friendly lady immediately traced my bag, it was in Riga. Most likely it already took a wrong turn in Brussels. Feeling relieved that my bag was not stolen we headed to the city centre and our hotel. Luckily in the USA stores are open 24/7 so I could by some necessities like a toothbrush and a deodorant as well as some clothes to wear the next day, all reimbursed by SAS of course. The next day my bags made it to the USA as well and where delivered to our hotel in the evening so we were ready to start our adventure, travelling cross-country on Amtrak towards San Francisco.

After our amazing trip along the Canada and US West Coast unfortunately the day to return home came all too soon and we found ourselves in Los Angeles Tom Bradley International terminal for our return home. After a fast check-in we joined the lengthy queue, snaking around the terminal building, to get through security and passport control. 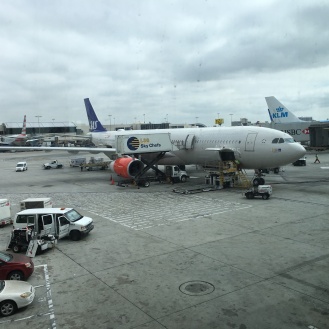 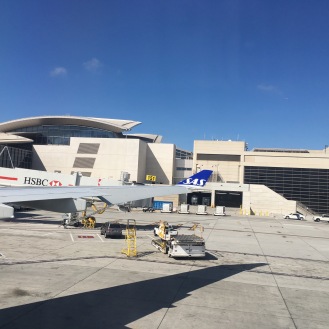 Upon boarding we could spot that this was a newer plane than the one we flew to Chicago, while the cabin was similar in colour scheme and seating, the newer style overhead bins and PSU’s gave away that this was a newer bird. At the seat we found the earphones, blanket, pillow and water bottle again.

Service wise the flight was a carbon copy of our flight to Chicago. Service started with a bar service with one complimentary soft drink, followed by the main meal. This time a chicken curry dish with broccoli and rice, accompanied by a salad with some ham on top, some crackers, cheddar, a ciabatta bun, butter and a lemon cake.

As this was an overnight flight I tried to sleep a bit, but the tight spacing of the seats with the limited legroom and our ‘early’ departure of 14:00 LA time made sure I didn’t get a lot of sleep. Timothy however just reclined his seat and napped all the way across the ocean.

Before landing quite a generous breakfast was served, some salad with a slice of ham and cheese and half an egg on top, a small fruit salad, a bun, butter, some yoghurt and an orange juice. Of course the crew also came around with complimentary coffee and tea. 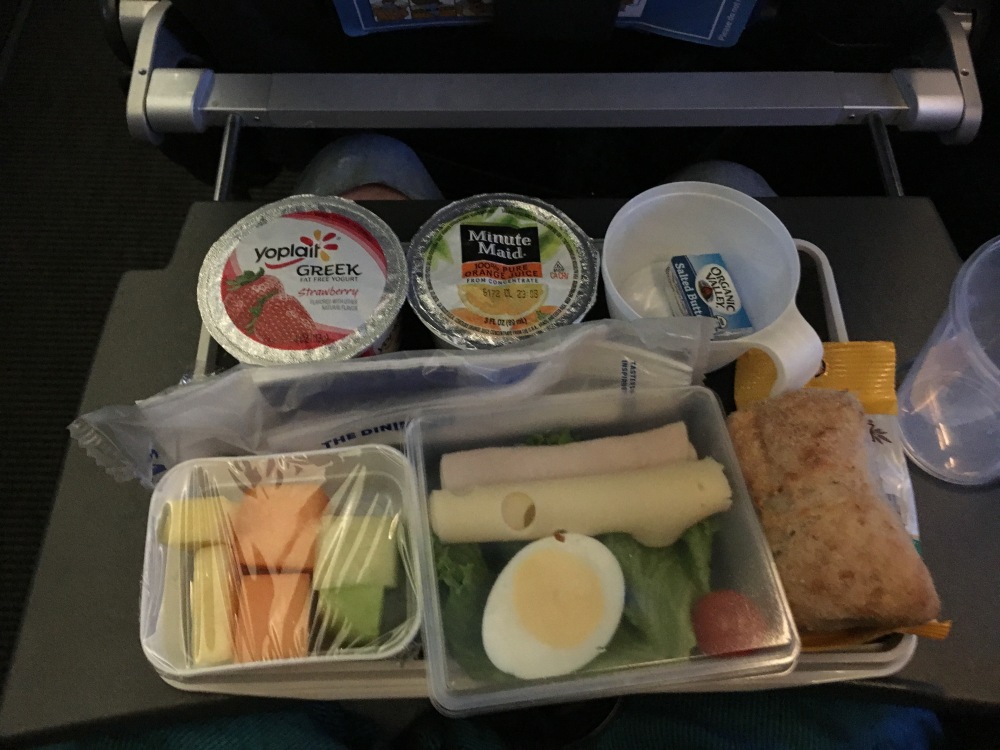 As we would have another lounge lay-over of almost 5 hours, we decided to head for the SAS lounge in Terminal 5 where we relaxed in a nice comfy sofa and had a bite to eat. The food and drink spread was of a similar setup as the lounge in Copenhagen. 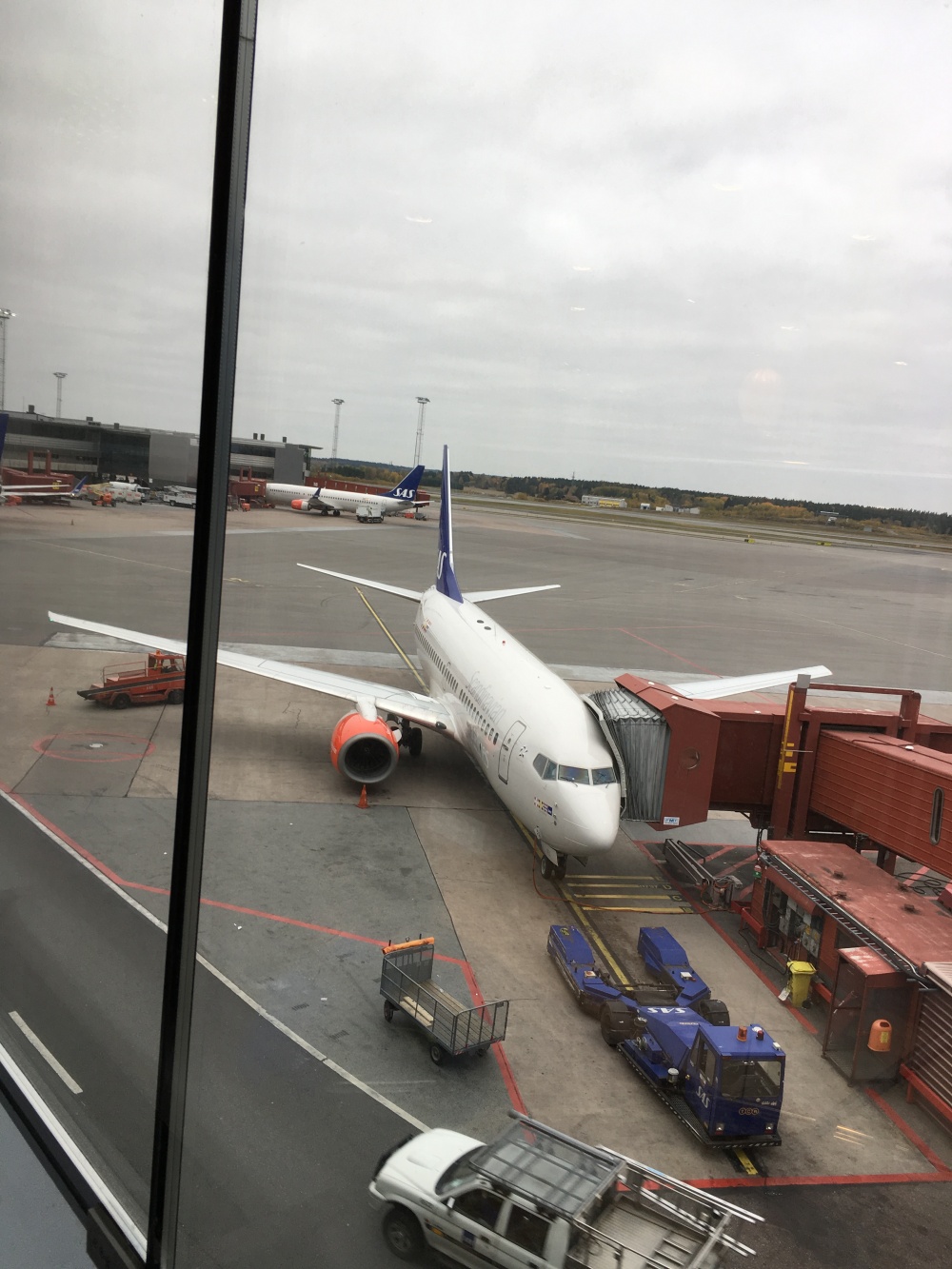 Our last flight was originally scheduled to be operated by a very rare Boeing 737-600 series, but at the last moment this was swapped for a bigger 737-700 series plane. Even though I was a bit sad for not flying on a rare airplane type this did provide us each with a row of 3 seats to stretch out. After the obligatory complimentary tea and coffee I napped all the way to Brussels. When waiting at the baggage belt my bag did come up this time and our epic USA trip came to an end.