During our Balkan rail trip, we stumbled upon a problem, while we had gotten all the way from Antwerp to Athens by rail we now had to return back in the direction of home, however rail connections between Greece and the rest of Europe are very limited so we decided to add an air segment to bring us to the capital of Montenegro, Podgorica. From Podgorica onwards we would hit the rails again with a scenic journey along the railway line to Belgrade.

The best routing to get to Podgorica from Athens was flying on Air Serbia, one of Europe’s more Obscure airlines, via Belgrade. Air Serbia was founded as JAT Jugoslovenski Aerotransport back in 1947 and served as the flag carrier for Yugoslavia (all still unified in one country at the time). In 2013 the airline was renamed into Air Serbia after Etihad entered into a strategic partnership with them.

On the day of travel we had to get from our hotel, the Hotel Fresh, to the airport. The most obvious choice for us would be taking the train there of course, however upon arrival in the Athens main station something seemed off, with a lot of travellers with baggage heading over to the metro station. After roaming the station for a while looking for the airport train, we were finally informed that there currently was no train service to the airport and we would be better off taking the metro there. Even though the metro takes a longer time to get to the airport, we still arrived there before the check-in desks opened and decided to take a quick look at the archaeological museum of the airport. After check-in opened, we dropped of our bags and headed to the non-Schengen area of the airport (as Serbia and Montenegro are outside of Europe) and grabbed a bite before the flight boarded. 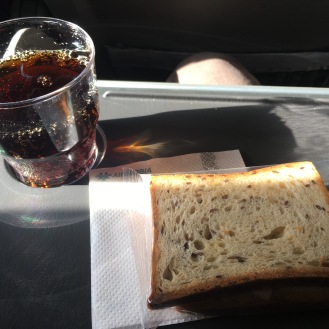 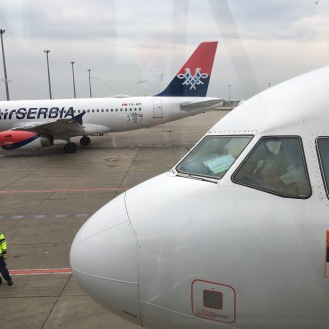 The Flight from Athens to Belgrade was flown by an Airbus A320 in a typical 3-3 configuration with slim line seats, as on every other European airline. During the flight we were served a drinks and a small sandwich, somewhat stale but still edible. There are no Screens on which entertainment is shown during the flight, but there was a Wi-Fi network installed on which you could stream movies, tv shows and music to your own device during the flight. To make it work you had to have the app installed in advance, even though I did, I never managed to get it to work during the flight. As this was only a short hop over the mountains we landed in Belgrade airport in next to no time.

The lay-over in Belgrade airport was interesting, it was a rather small airport with few shops and only 1 proper place to get some hot food. You could either choose between pizza or pasta, but it still took quite a while to get it as it had to be made completely fresh. This was no problem for us as we had plenty of time, but we did think the whole process was a bit cumbersome.

Our next flight would be leaving from a bus gate as the plane to Podgorica was only a small propeller plane which was not parked at a terminal position. After going through security at the gate we had to wait in a small holding area before we were all allowed to board the bus that would take us to the aircraft. 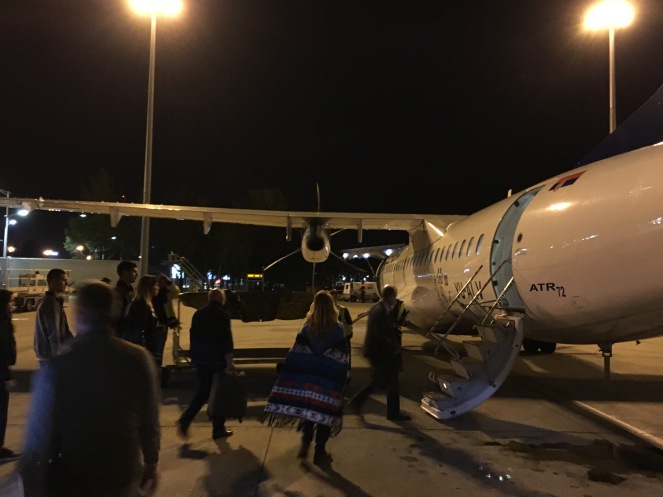 When we got to the aircraft we could take a short walk across the tarmac, breathe in the kerosene filled air, and board through the rear of the aircraft and walk all the way up to our seats in the front. Instead of using a pushback truck to push us back onto the taxiway, the pilot just put the plane in reverse and backed out of the parking position by itself, which is quite an unusual thing to experience. After a very brief take-off roll we flew along the mountains towards Montenegro. Unfortunately it was already dark by now so we couldn’t really see much of the scenery, which must be quite spectacular to see by daylight. During the flight the cabin crew offered a cup of water, but the short flight time did not allow for more. After landing and parking in Podgorica, we could walk from the plane to the airport terminal by ourselves where after getting a Montenegrin stamp at the passport control we swiftly could pick up our backpacks and take a taxi to our hotel for the night.

Air Serbia was a very standard European airline, they do not stand out in both a positive or a negative way and flying them if they fit your travel plans surely is not a bad idea.