In October, the Independence of the Seas terminated its Summer season in Europe. The Independence was recently renovated in the context of the ‘Amplified‘ programme. Royal Caribbean International is investing 650 million euros (738 million US dollars) between 2018 and 2021 to refurbish ten cruise ships.

The ‘Amplified’ programme will upgrade the Oasis of the Seas, the Allure of the Seas, Freedom-class and Voyager-class ships to the expectations set by the company’s flagship the Symphony of the Seas.

‘The ‘Amplified’ programme consists of renewing the outer decks with swimming pools, spa-like surroundings and activities fit for outside. Furthermore, new attractions such as waterslides, waterparks and the virtual bungee jump trampoline Sky Pad.

The Independence of the Seas is the first ship to be refurbished. New attractions include The Perfect Storm water slides, Splashaway Bay for the little ones, the Sky Pad, Glow-in-the-dark lasertag and the Puzzle Break escape room.

Te Independence weighs 154,407 tons, contains 15 decks and has space for 3,858 guests. Travellers in Belgium can book via Cruise Connection.

Royal Caribbean International’s Independence of the Seas in Southampton, UK, after her multi-million pound makeover. She will homeport in Southampton for the summer season. The Perfect Storm 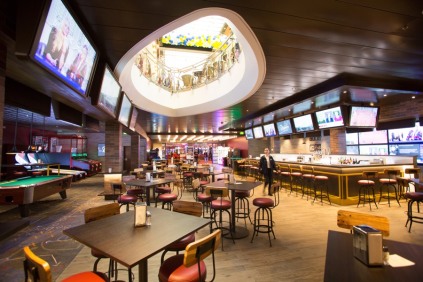 Royal Caribbean International’s Independence of the Seas in Southampton, UK, after her multi-million pound makeover. She will homeport in Southampton for the summer season. Playmakers Sports Bar and Arcade

Royal Caribbean International’s Independence of the Seas in Southampton, UK, after her multi-million pound makeover. She will homeport in Southampton for the summer season. Skypad

Royal Caribbean International is also investing 160 million euros (181 million US dollars) in CocoCay, a private island in The Bahamas owned by RCCL. It is basically a huge water theme park. This Thrill Waterpark includes the 40-meter-high Daredevil’s Peak, the Oasis Lagoon and a 490-meter-long zip line.

Up, Up and Away elevates visitors to 140 meter above sea level in a helium balloon, providing the highest vista of The Bahamas.

A new quay facilitates disembarking all passengers onto the island.

The Independence spends its Summers in Europe and its Winters in the Caribbean. It will sail from Fort Lauderdale in Florida (United States) to Puerto Costa Maya and Cozumel in Mexico, Falmouth in Jamaica, Labadee in Haiti and CocoCay. Labadee  (or Labadie in French) is another private resort of RCCL.

In May 2019 the ships crosses the Atlantic Ocean to provide cruises in Western Europe, the Mediterranean and Norway‘s fjords.

Photos were provided by Cruise Connection. The videos are from Cruise With Ben & David.