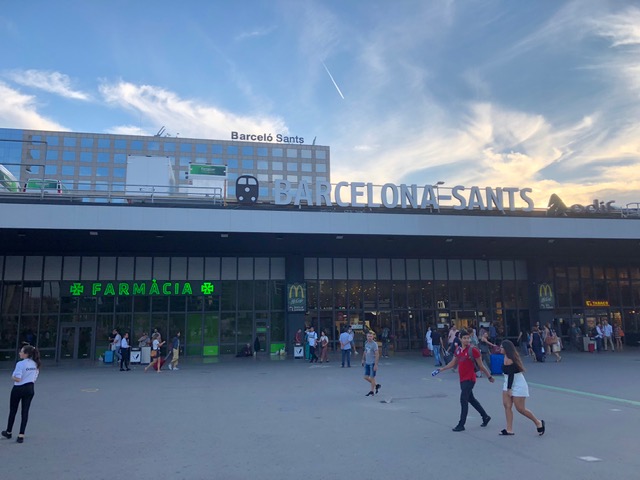 After experiencing a Talgo 4 night train from Lisbon in Portugal to Hendaye in France, train enthusiast Jeroen decided to give the Talgo 7 night train a go from Barcelona in Catalonia to Vigo in Galicia. The Talgo trains are operated by the Spanish company Renfe. He tells Trip By Trip how it was.

This time, Jeroen knew how to book his cama gran clase room. He could also book his room two months in advance. It cost him 126 euros.

The train left at 8.20PM at Barcelona Sants railway station. “Unlike Lisbon, Sants is conceived as an airport terminal”, Jeroen says. Which means: ticket and baggage and security checks. 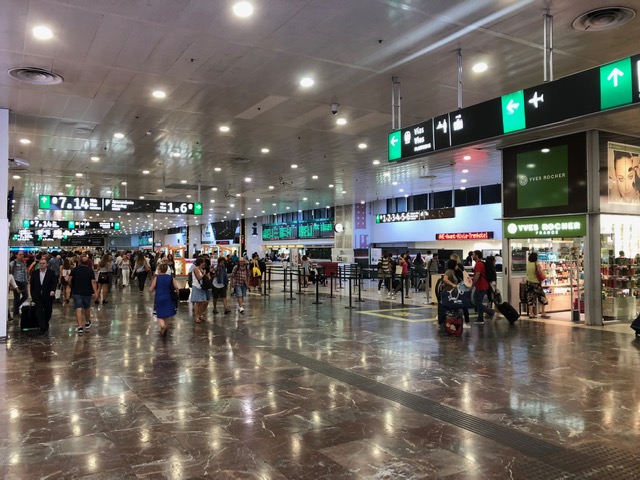 “Afterwards you wait in an airport gate-style waiting area. So be there in advance. Also: announcements are done in Spanish so keep an eye on the information screens.”

Jeroen’s Trenhotel is called ‘Galicia‘. The platform is opened twenty minutes before departure. “Obviously I again had to show my ticket. On the platform there are enough attendants to help you to find your coach and seat.”

Unfortunately, on the outside of the train there’s a display only every other coach. “You need to know to go left or to go right. Make sure to ask. You don’t want to end up in the wrong coach.”

Compared to the Talgo 4, the kitsch and camp are gone. “The rooms are classy with a white interior with light red accents. The train attendant explained how the switches and buttons work. There’s also a tv monitor with tutorial clips and a film catalogue.” Just as in airplanes. “There’s a choice of eight films, but all in Spanish.”

The bathroom is as on Talgo 4 small but practical. Renfe provides an amenities bag with everything you need. There are enough towels. 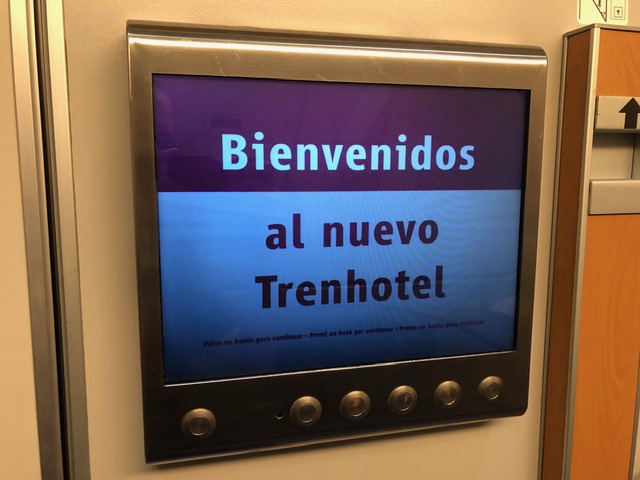 The door can be opened and closed with a keycard. Renfe has listened to criticism on hard seats and the Talgo 7 seats are softer to the bum. The armrests are high enough. Tray tables come out of the armrests. There are three power outlets and an intercom system to contact the train attendant. 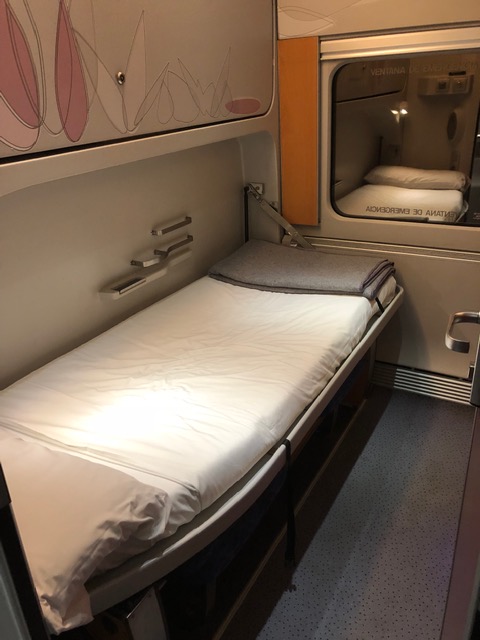 The bed can be ‘activated’ with a keyhole in the wall. It tests on the seats and is a bit wider than in the Talgo 4: 80×200 cm. No sheets, but a modern duvet.

The train left Barcelona on time. At Zaragoza Delicias railway station the train stayed fifteen minutes at the platform. “I wondered why and exit the train. I saw a coach with preferente type seats and the bar coach. It looked stylish and cozy. But I wonder if you leave the journey rested…”

The reason for the standstill? The train had to change its gauge or track with. “I was excited to experienced this. Probably few passengers realized what happened. We leave Zaragoza with fifteen minutes delay. The wheels squeal and there’s a loud banging noise. I wondered if everything was okay. It’s a bizarre process.”

After this changing of bogeys, the trains continueed its journey towards León.

There’s time to sleep and relax because the train only arrives at Vigo-Guixar around noon. “I didn’t sleep well. Maybe I had too much coffee. But the noise and shaking didn’t help.”

Waking op, Jeroen sees the Miño, a river which forms a natural border between Spain and Portugal. The trains stops for half an hour in Frieira. There’s only one track and the Galicia has to wait. Announcements are only in Spanish. 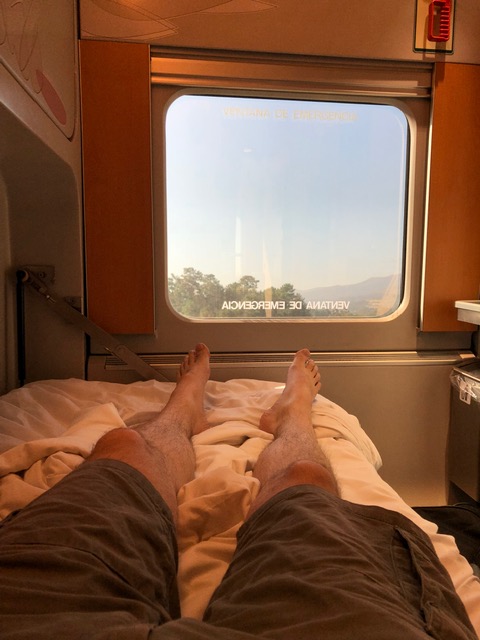 The train arrives with a 30 minute delay at Vigo-Guixar. the station is sober. Mostly concrete, with yellow, blue and green windows. There’s a ticket office and and a little tavern. From Vigo there’s twice a day the IC Celta train to Porto. 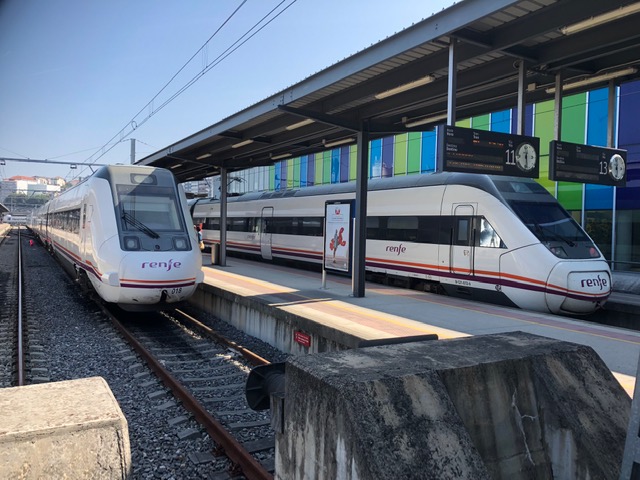 “Vigo isn’t a cultural top destination, but is a nice city to be in. The bay is mystical, with often fog. There’s a nice hike to be done to the (free) castle ruins. The view over the town is magnificent.” 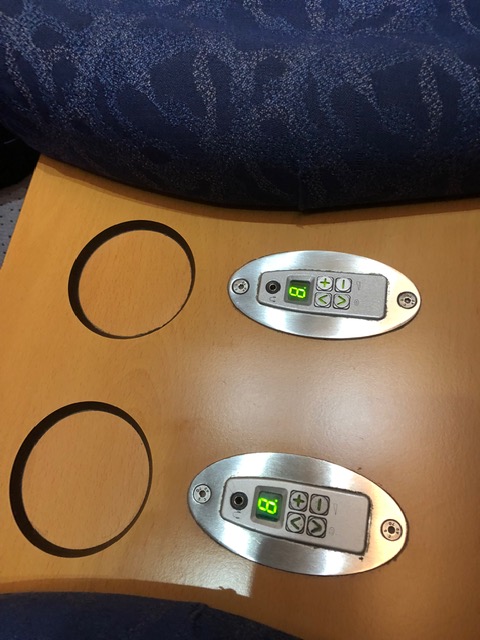 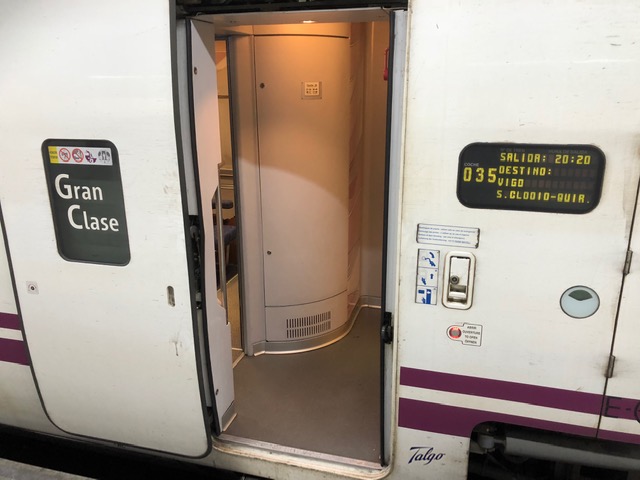