As we only had a short time in Istanbul between our arrival and departure (it was a mileage run after all), we decided to stay in a hotel close to the airport. As the Hilton Garden Inn Istanbul Ataturk Airport, was only a 10 minute drive away, offered a complimentary airport shuttle service and an unbeatable fare of €35 for one night we decided to stay there.

Exiting the Istanbul Ataturk Airport we entered into a big chaos, and of course we could not find our hotel shuttle pick-up point.

After connecting to the Airport’s free WiFi (as roaming in Turkey is very expensive!) we found out that it only runs three times in the morning and three times in the evening, and we would have to wait over an hour for the next one. So we decided to just take a taxi instead, to avoid being ripped off by some shady taxi driver we used the Bitaxi app to order our taxi.

It took a while before we could locate our taxi but we were finally on our way, or so we thought. Apparently the driver had no clue where he was going, or where the hotel was, so he took a series of wrong turns and even drove backwards in the middle of the motorway. So we were happy when we finally reached the hotel in one piece after this very Turkish welcome. 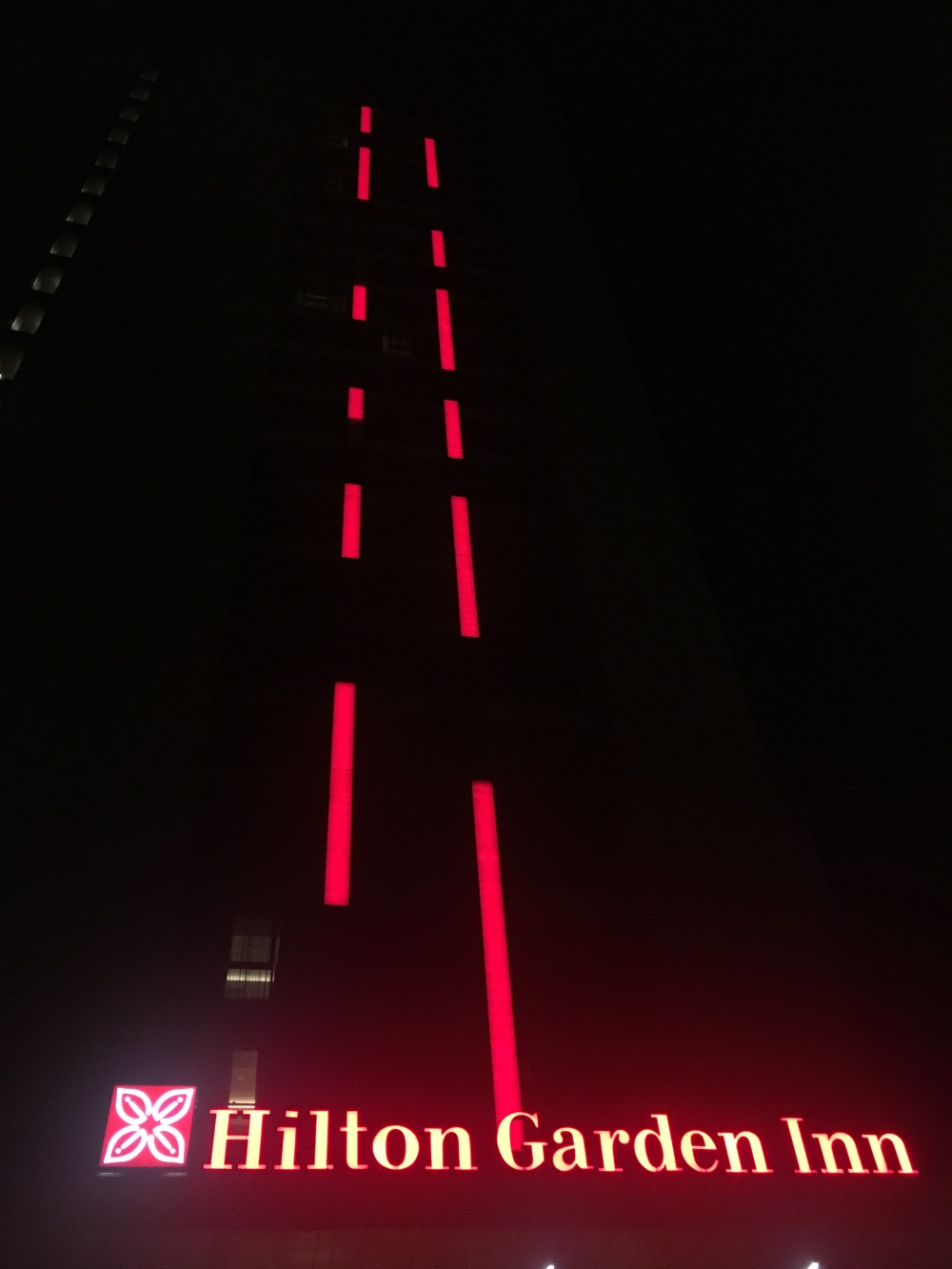 The hotel was rather standard tower building, but the outside was lit up with Led lights that changed colour and design, adding some playfulness to it. The lobby was what you would expect from a Turkish hotel, with expensive looking materials and a brown colour palette. 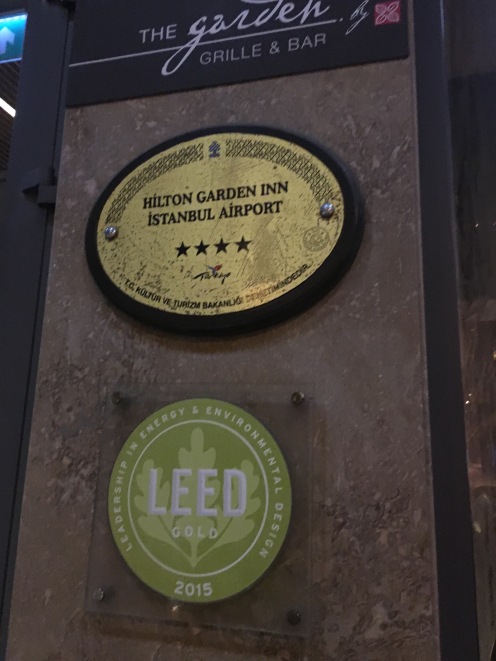 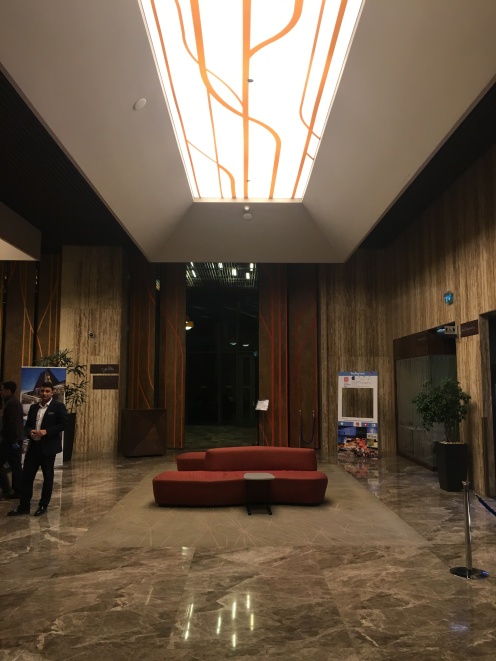 Check-in was very smooth and friendly, with a waiter swiftly coming over, offering us a Turkish tea to welcome us. 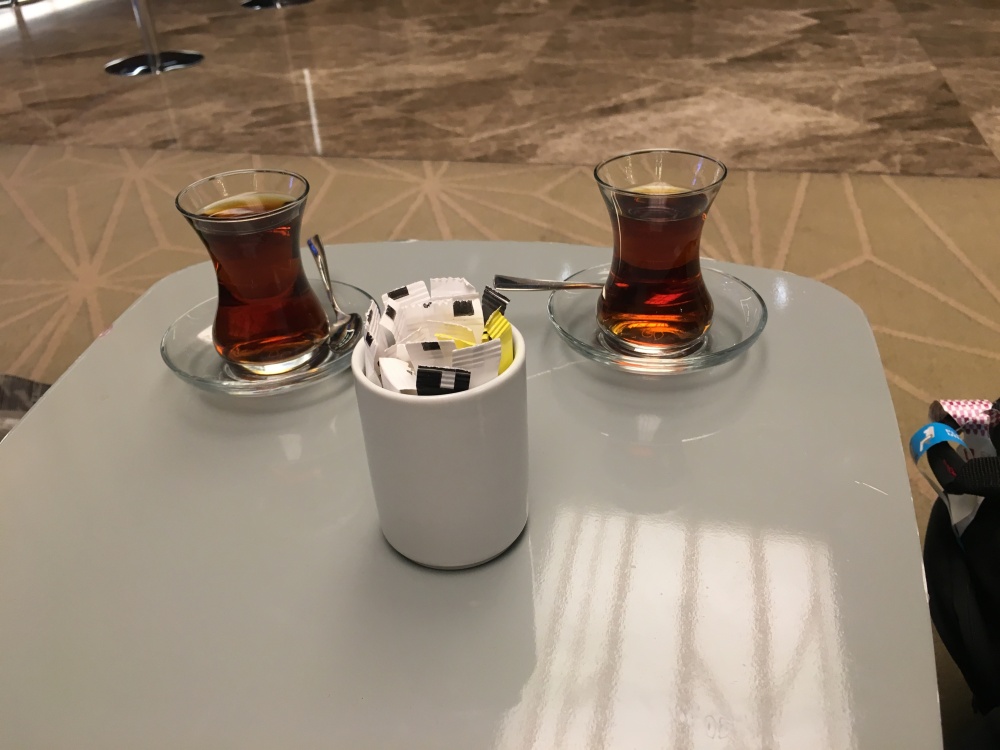 We received a standard, twin bedded room on the 8 floor. It was a pretty standard hotel room with a desk and flat screen TV opposite from the two beds.

Upon the desk there where coffee and tea making facilities as well as 2 complimentary bottles of water. There where plugs available to charge your phones and other necessary electronics at the bedside table.

By the window there was also a sofa with a side table. The noise insulation wasn’t very optimal as we could clearly hear the cars on the motorway and the planes taking off, so it might not be the best choice for light sleepers. 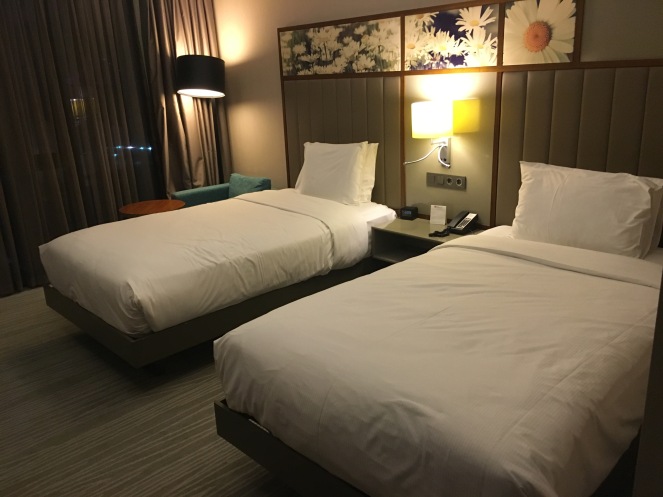 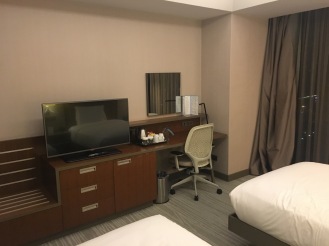 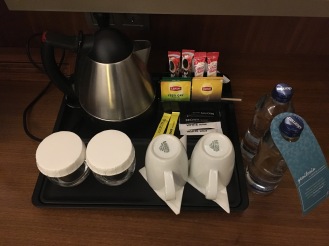 The bathroom looked pretty nice, with a huge rain shower and washbasin. There were sufficient towels, and of course the necessary toiletries. They even offered some (very flimsy) slippers for you to wear in your room.

The only negative was the toilet, the toilet seat clearly needed some fixing as it was bent and diagonally on top of the toilet. While it was clean and functional a little detail like this should be fixed as soon as possible. 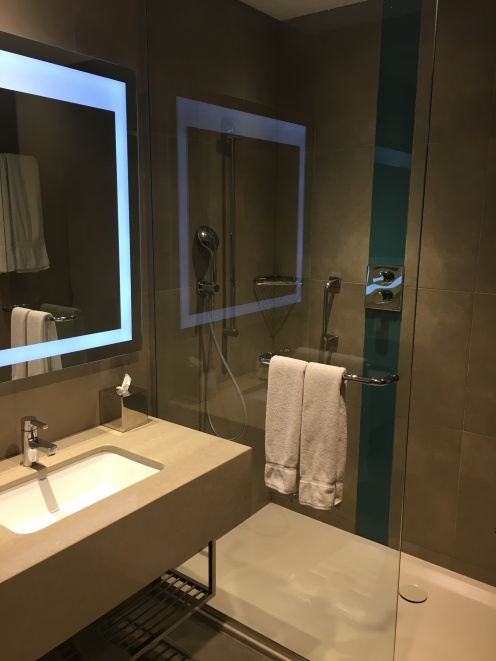 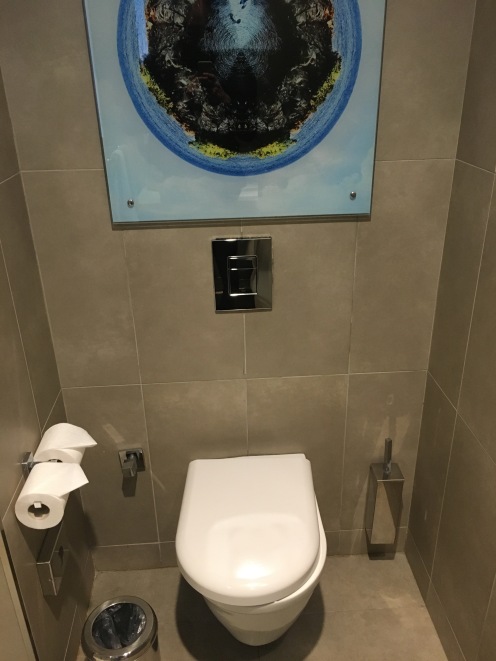 The hotel also offered number of other facilities like a business centre, a gym and a swimming pool but as we only had a short night there we did not have the chance to try it out. We also opted not to have breakfast at the hotel as we would be having breakfast at the Turkish Airlines Lounge in the airport.

All in all it was a satisfactory stay, the hotel offered everything we needed for our short stay. As the Ataturk airport will close the hotel’s location will probably not be very interesting anymore as it is not quite close to the city centre or any major areas of interest, but if you can get a good deal there it could still be a good place to stay.

Have you stayed at a Hilton Garden Inn before? How did you like it? Let us know, in the comments below!