In the month of April I made a week long trip with Michel, discovering German aviation history in Friedrichshafen, Danish Railways History in Odense and navigating the sea to discover some Estonian history in Tallinn. We would be meeting up in Frankfurt as Michel was flying inbound on Latam´s daily 787 from Madrid while I travelled there from home using DB ICE trains.

Our first night we spent at the Hilton Frankfurt Airport which is located in the Squaire, a huge building filled with offices, restaurants, shops and a hotel located right above the long-distance railway station. It is connected to Frankfurt Airport Terminal 1 through a connecting hallway.

The middle of the building has a huge glass roof, and as it was a warm and sunny day when we passed through you could really feel the greenhouse effect as it got quite warm inside. 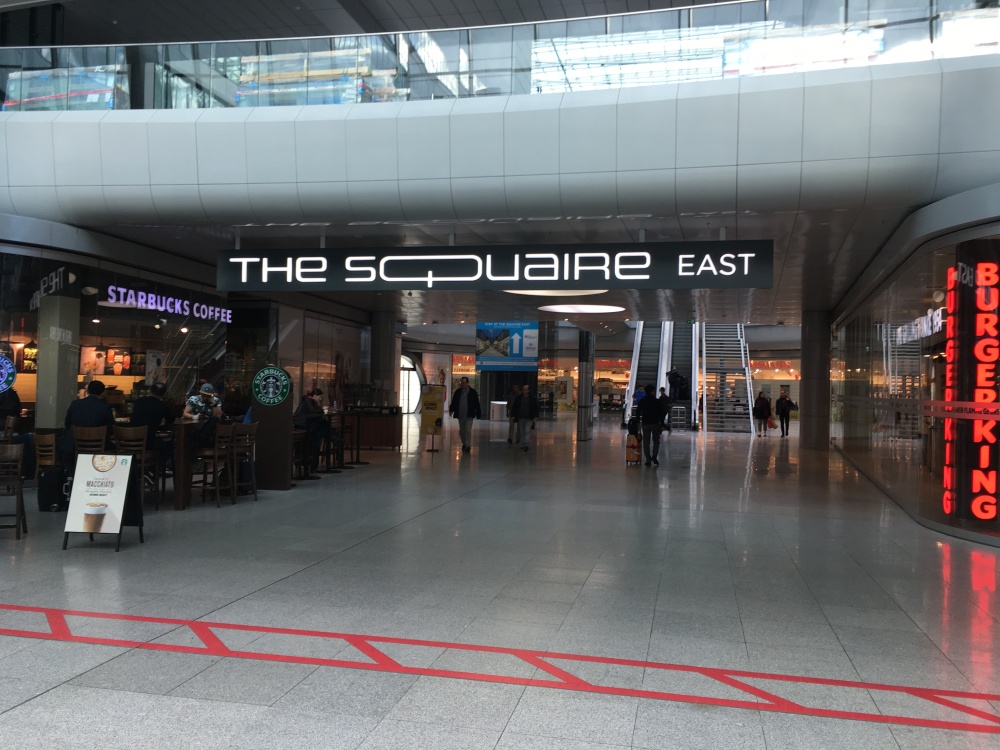 The Hilton is located at the Eastern end of the building, with a huge glass façade separating the central glass concourse between the general public area and the hotel lobby. Just to the left before entering the Hilton there is an entrance for the adjacent Hilton Garden Inn. 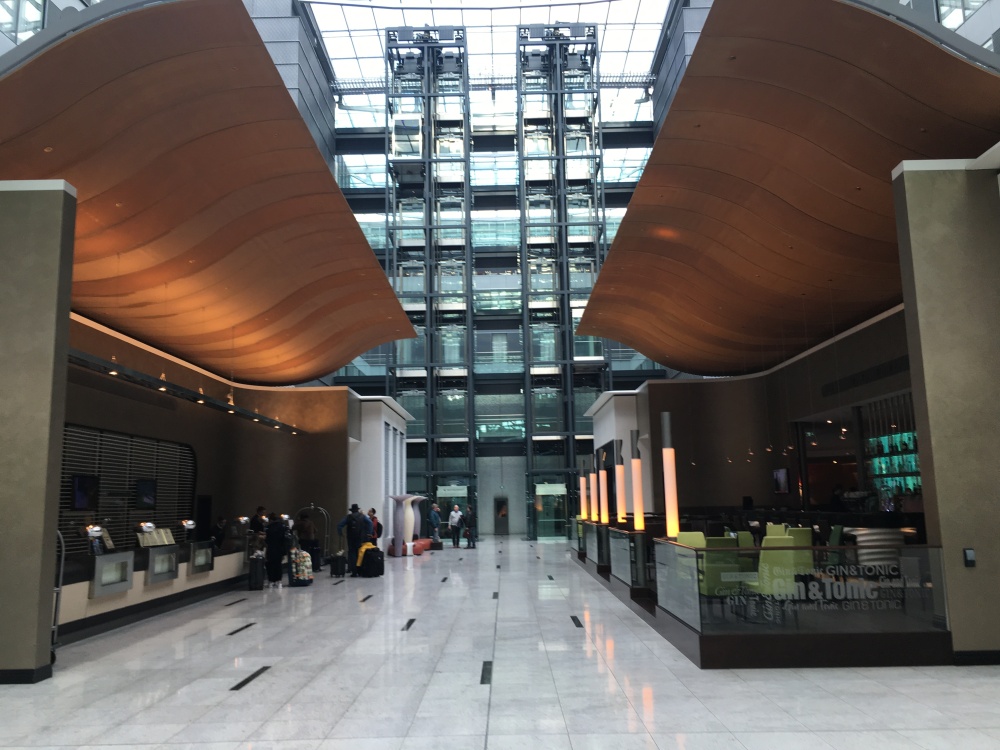 I was swiftly checked in and allocated a twin room on the 7th floor, luckily with an outside view as there are also rooms looking out on the atrium. The room itself was what you would expect from a Hilton room, featuring 2 comfortable single beds, a working desk on the opposite end of the room with the wall mounted TV above it. 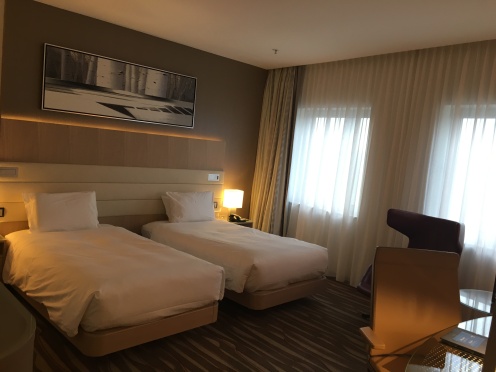 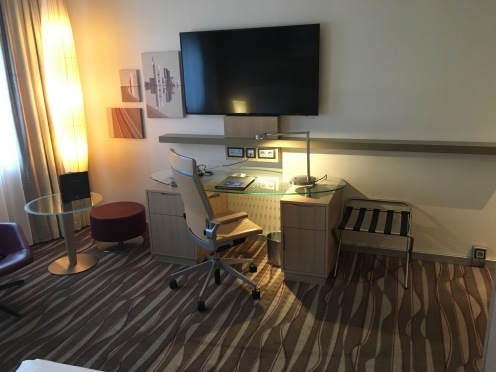 You also had some wardrobes and along the outside windows there where a chair and a stool along a glass coffee table to relax.  On the corner towards the bathroom there where coffee and tea making facilities and a minibar. The down side of the room was the lack of powerplugs, only power plugs at the side of one bed, none at the other and the remainder being in the desk area. 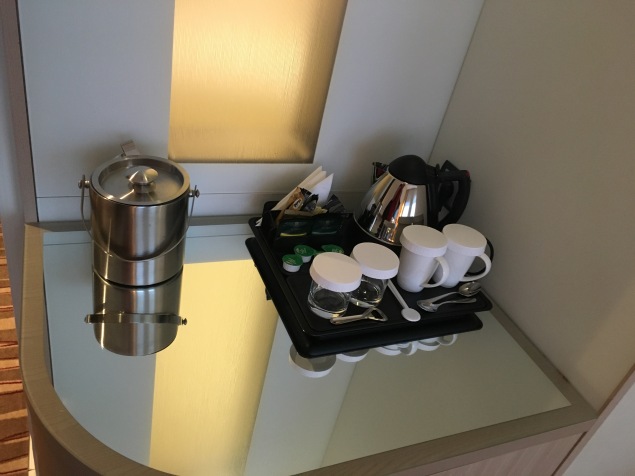 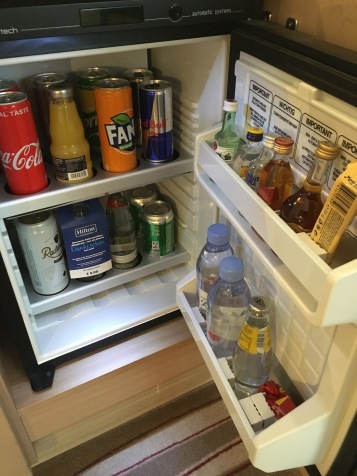 The best part of the room was the very well thought out bathroom, it featured both a walk in rain shower and a bathtub, a toilet and a washbasin with lots of room alongside to put your stuff. 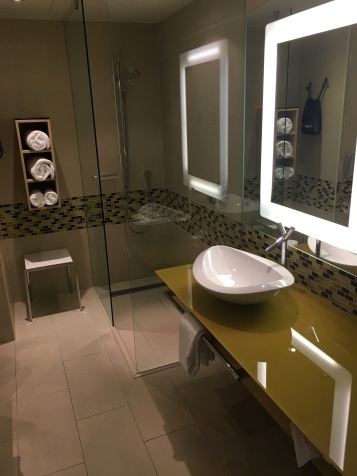 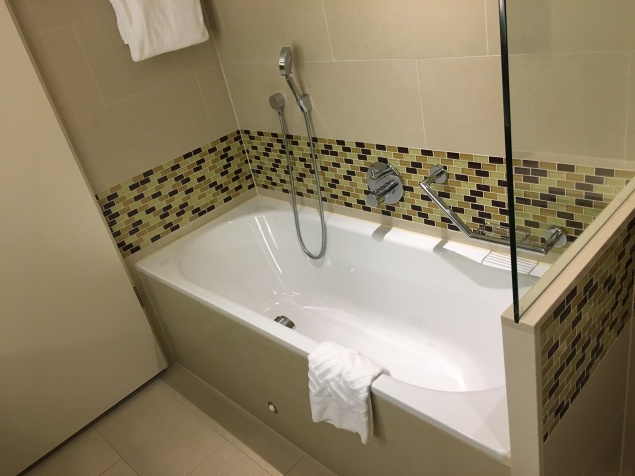 The towel rack was of an original design in wood with different holes where plenty of towels where provided, if you moved your towel elsewhere this was also a very useful space to store stuff.

Right under the towel rack there was a table/stool thing which you could use to either put your change of clothes on without risking them getting wet or maybe use to sit on to help you get dressed if you are less able to do it standing up, a feature which is usually severely lacking in other hotel bathrooms so thumbs up for Hilton to think of it here. 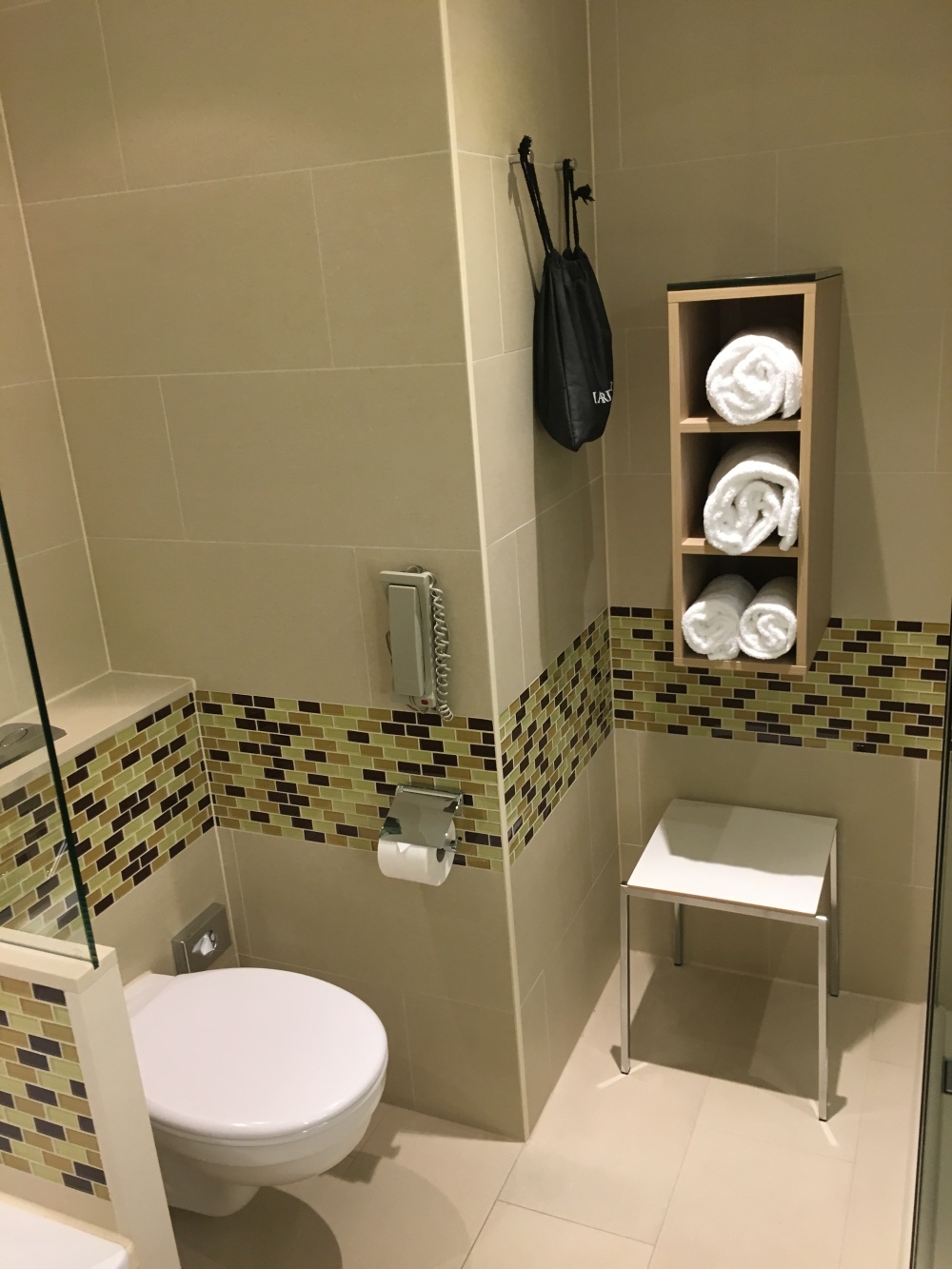 There were some nice individual toiletries on offer too, which always gives a more luxury touch to the whole experience. 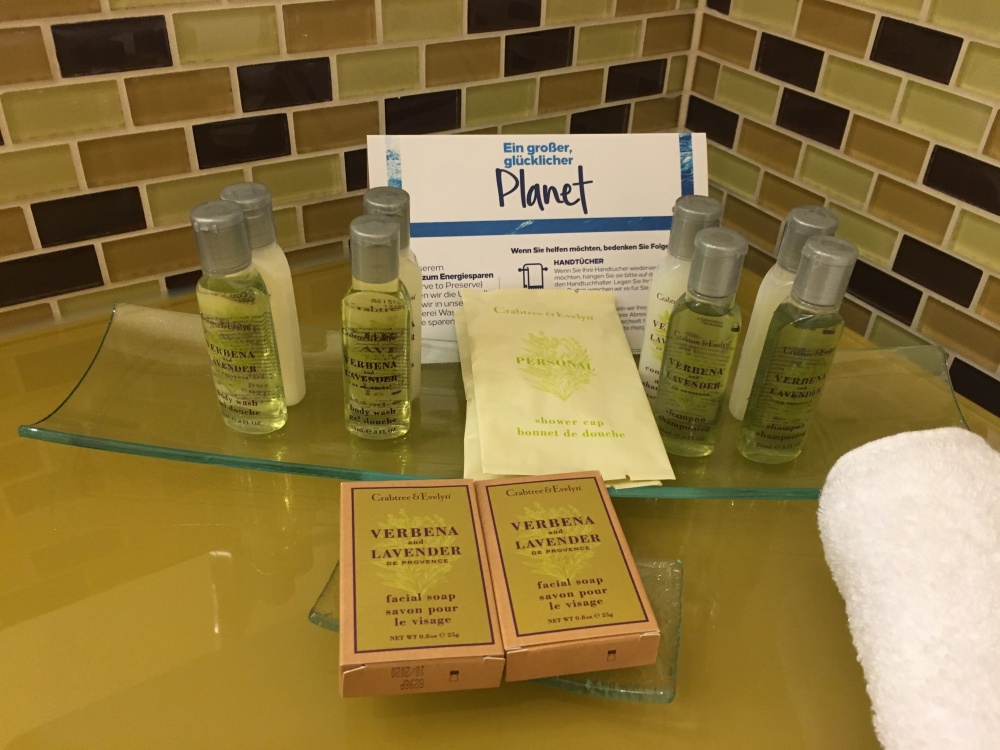 We had access to the Executive lounge on the 10th floor, which overlooked the atrium and the view was even more spectacular at night when the atrium and lifts where specially lit up. 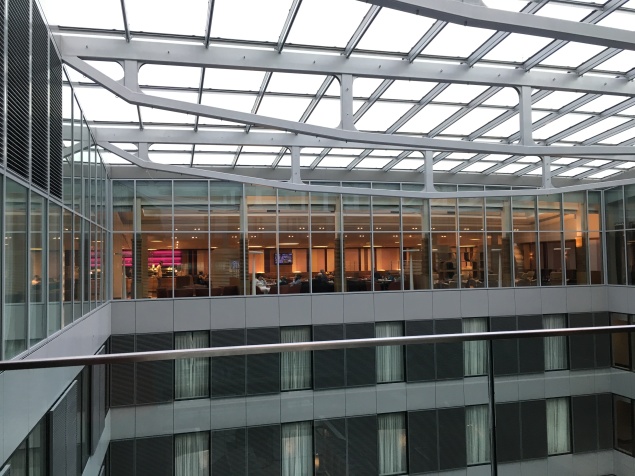 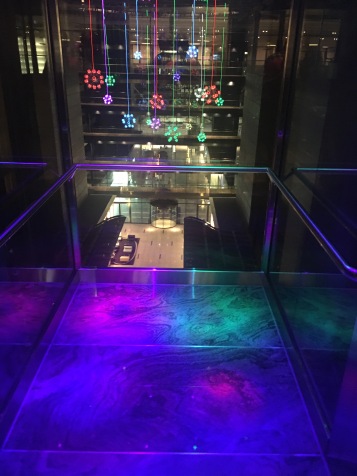 The lounge itself was quite large, with an unstaffed welcome desk at the entrance after which you ended up in the buffet area where food and drinks where served and table seating provided. 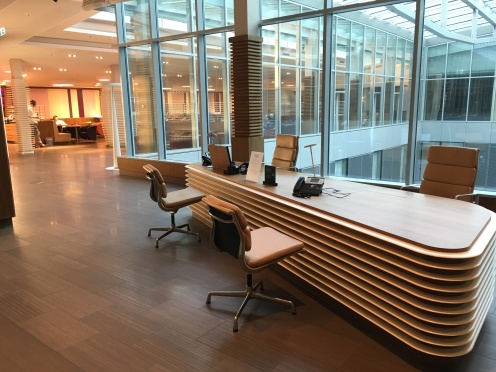 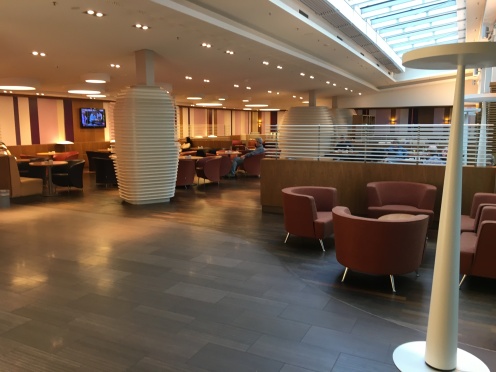 Further down the lounge you had some more sofa style seating, a business centre with both a windows pc and a mac and some toilets (which was a vast improvement over the lounge in Hilton The Hague).

As we only arrived in the evening we couldn’t sample what the afternoon tea was like but instead could start with happy hour. A number of German (sparkling) wines was on offer as well as beers and hard liquor like gin and whisky. 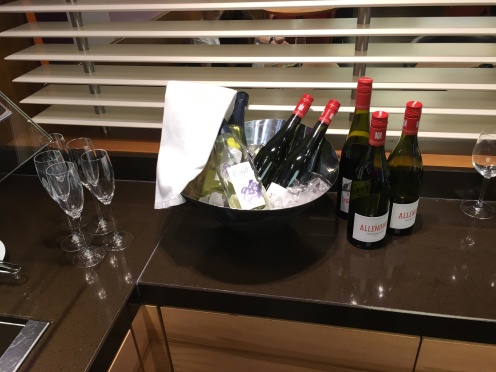 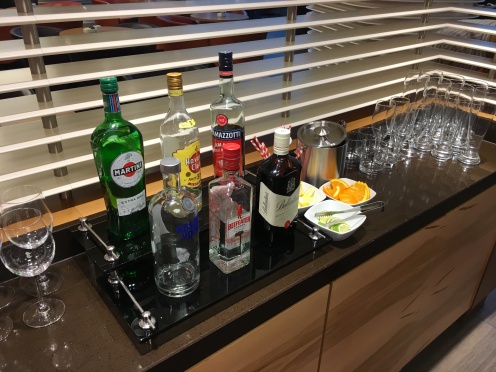 Of course you could also get soft drinks and coffee and tea as they are available all day long. 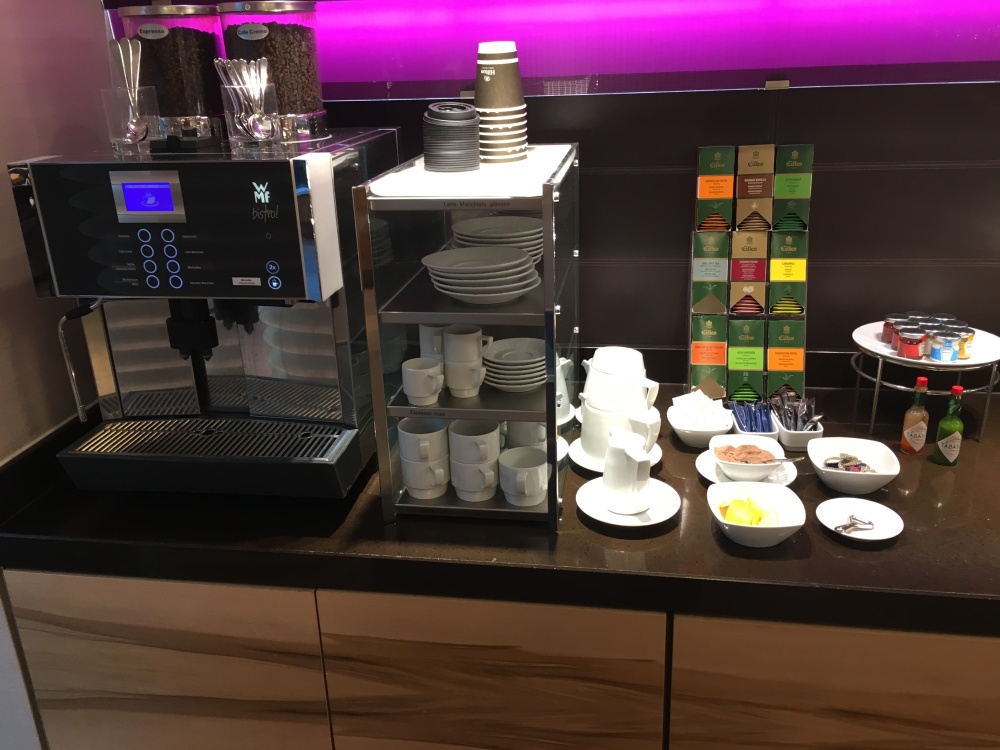 There were two types of hot food on offer (chicken with mozzarella and tomatoes and some veggies balls). Further you also had some salads, sandwiches, cheese, vegetables, bread and some brownies as sole sweet offering. 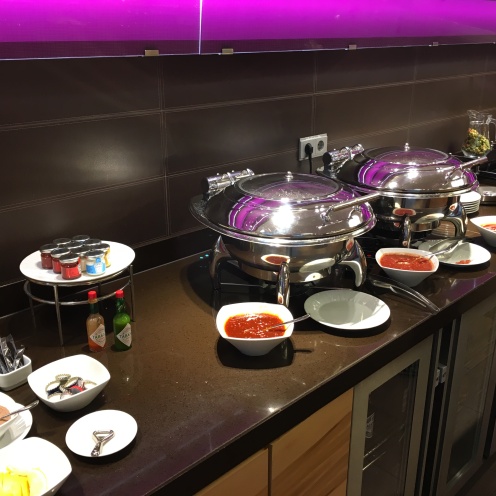 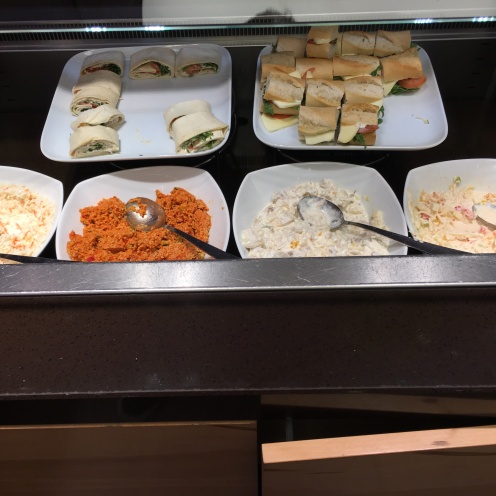 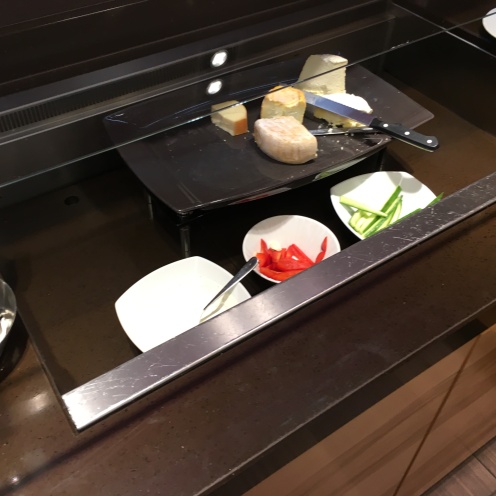 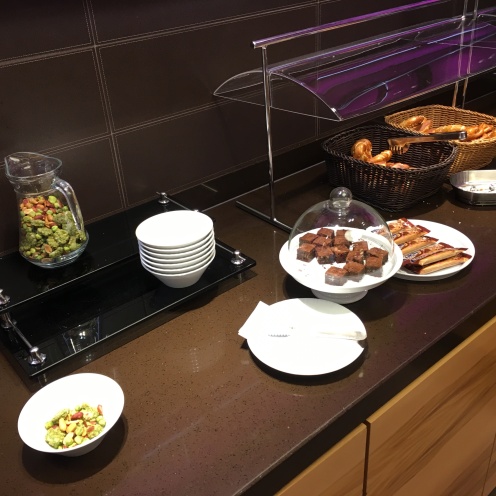 Taste and quality of the offered was very good and items running out where swiftly replaced.

Even though the Executive lounge also offered a continental breakfast, we opted to eat our breakfast in the main restaurant as it had a bigger offer. As you were seated staff came around asking whether you wanted tea or coffee and some eggs made to order.

Everything else was available on the breakfast buffet. Several dishes with fruits and vegetables provided for some healthy options. 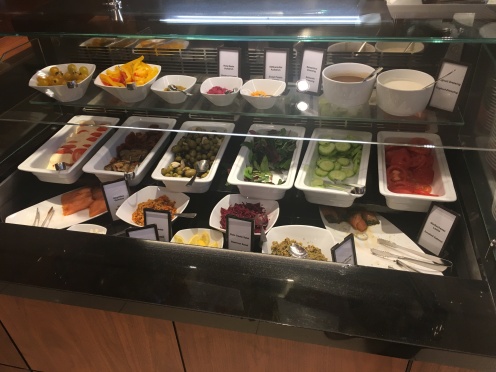 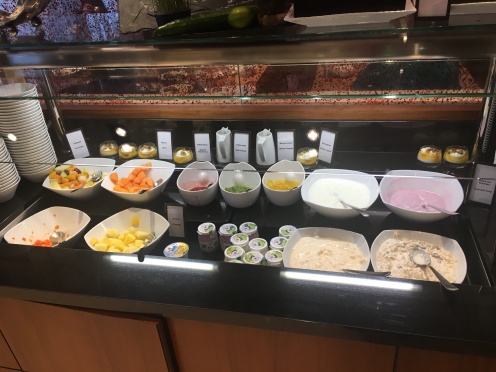 For the more carb-hungry people there were a number of warm dishes, cheeses and cold cuts, breads and cereals. Juices were also available for you to drink as much as you wanted. 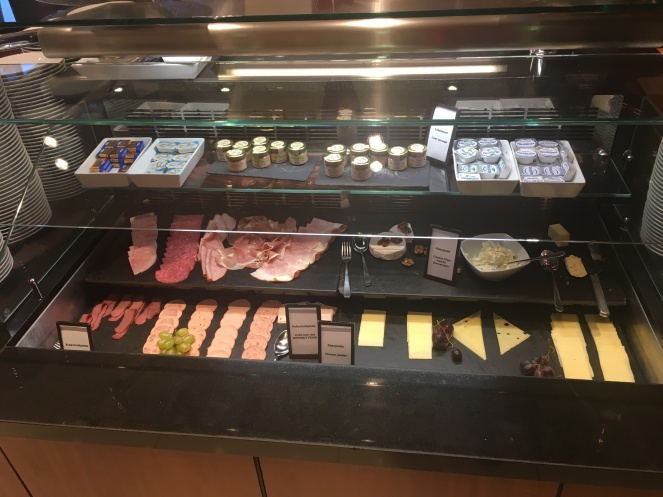 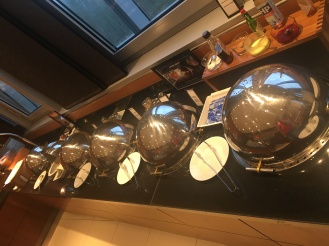 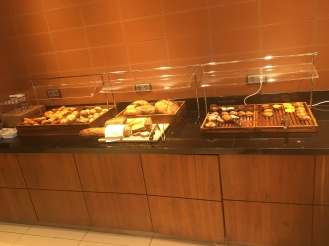 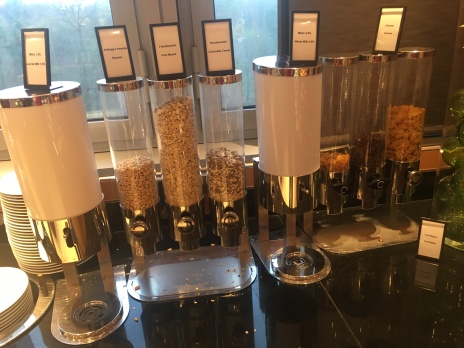 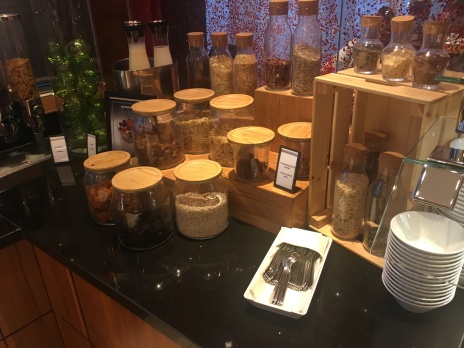 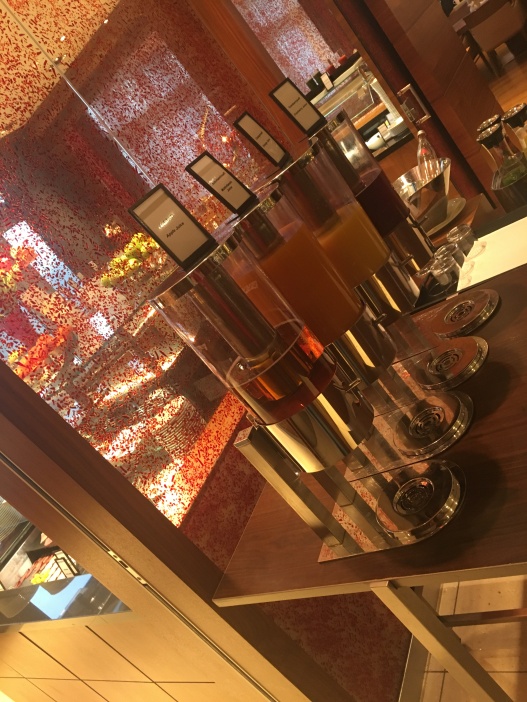 All in all we had a very satisfactory stay in the Hilton Frankfurt Airport and I would not hesitate to stay here again if I happen to have to stay the night at Frankfurt Airport. This hotel was clearly worth its 4 stars and offers everything you expect of it.

How is your experience with Hilton hotels? Let us know in the comments below!