At the end of August, Thanh and I spent a day in Amsterdam. The reason or excuse was visiting the ‘Cool Japan‘ exhibition at the Tropenmuseum. During our walk through the streets of Amsterdam, we stumbled upon De Hallen Amsterdam.

De Hallen (The Halls) is a cultural centre in the Kinkerbuurt neighbourhood in Amsterdam-West. Its address is Hannie Dankbaarpassage 47, 1053 RT Amsterdam, the Netherlands.

It is located in the former tram depot Remise Tollensstraat. In Dutch Dutch a depot is a remise. In Flemish Dutch we say stelplaats. 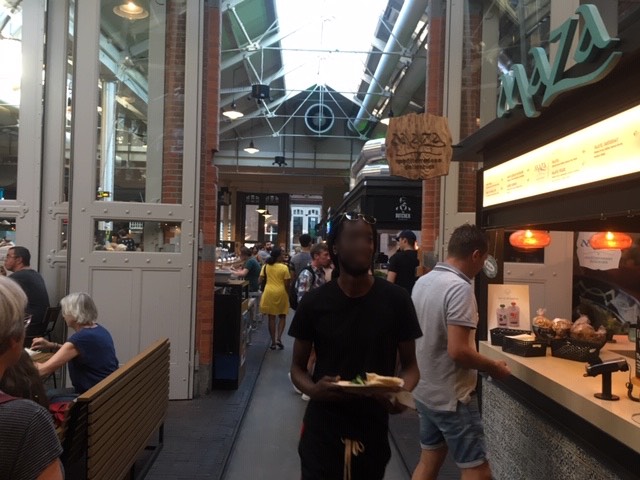 The Gemeentevervoerbedrijf Amsterdam (GVB) used it as depot until 1996. Afterwards it had several functions including until 2005 as Amsterdams Openbaar Vervoer Museum, municipal public transport museum.

The remaining standard gauge (1435 mm) is a witness of its past.

That is, in a nutshell and according to Wikipedia its history.

Thanh and I just walked through. It was inviting. If we hadn’t have dinner already and didn’t have a train to catch, we would have tried the food hall.

De Hallen follows a now popular concept of re-using industrial space and turn it into something cultural, gastronomical and or small-businessy. It reminds me of the Mercado de San Ildefonso in Madrid and the Mercato Centrale in Florence.

Do you have such spaces in your area?