As Timothy and I felt like taking a weekend break to end the year, we decided to go for a weekend in the Slovenian capital Ljubljana. We had seen some pictures of the recently opened InterContinental hotel over there and we felt like trying it out ourselves.

The hotel is located at the edge of the city centre near the bus and railway station at the end of one of the main shopping streets.

Getting to and from the airport wasn’t the most straightforward, on weekdays you only have one bus per hour, in the weekend it even only runs every two hours.

Of course when we exited the airport we saw the bus just departing and as we did not feel like waiting an hour for the next one, we decided to take a taxi to the hotel. The taxi ride cost us a whopping €60, the hotel offers a VIP transfer at €45 which we took on the return and it is advisable if you travel to Ljubljana to contact the hotel and let them arrange the transfer for you as it is cheaper. 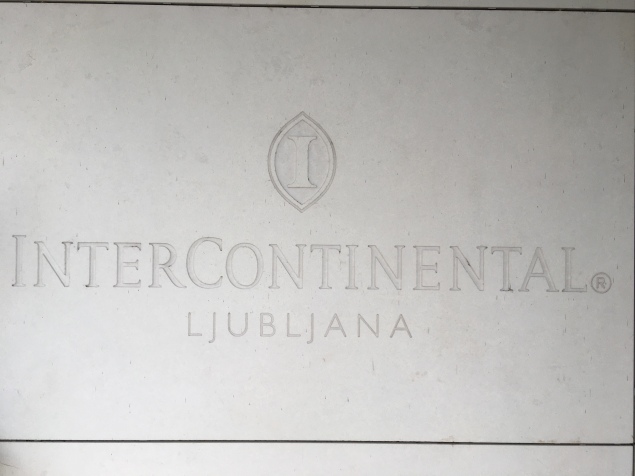 Checking in was very friendly and welcoming, as we arrived right at noon our room wasn’t yet available but they said it would only took 30 to 45 minutes and we could wait in the Club Lounge until the room was ready.

As we booked an executive suite the Club Lounge access was included in the room rate. At check-in they also took our bags to be brought directly to the room.

We went upstairs to the 19th floor to go and wait in the Club Lounge, where the attendant welcomed us and immediately offered us some tea while we waited. The lounge offered a number of different seating options with some sofas to relax in, a small library, a business area with a laptop and printer at your disposal and of course some table seating.

We soon found our go-to spot, a table in the corner of the building, overlooking the railway station. The entire lounge had floor to ceiling windows, providing a panoramic view over the city. 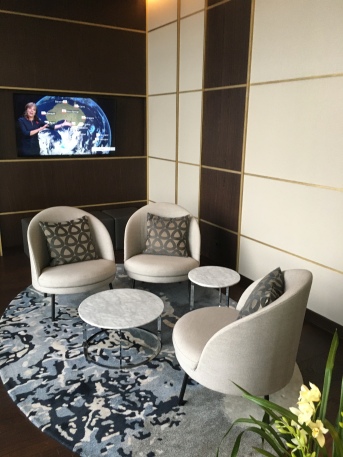 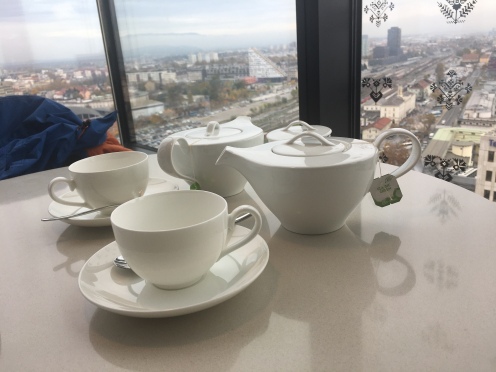 During the day some small snacks like cookies, crisps and fruits where on offer as well as water, soft drinks, beers and coffee and tea.

In the evening between 18:00 and 20:00 there was happy hour, with some local spirits and wines on offer (which we all duly tasted and approved). Alongside they offered some delicious hot and cold mini plates with very original combinations and some vegetables, cheese cubes and sliced fruit.

For us this was enough to fill the little hole we had left after enjoying afternoon tea but people looking for a more substantial meal will still have to go out to a proper restaurant. 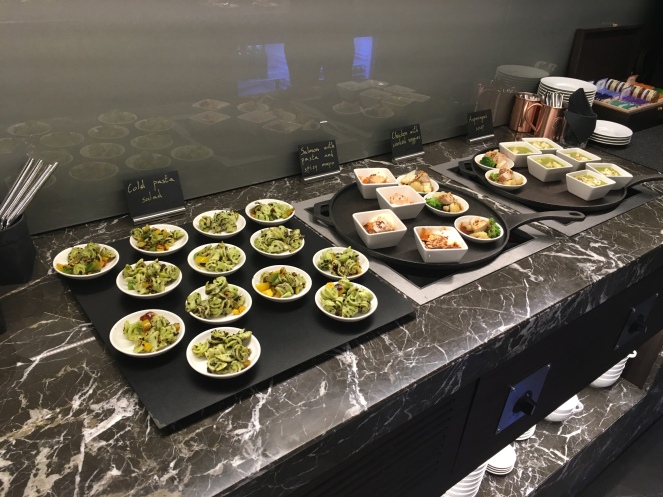 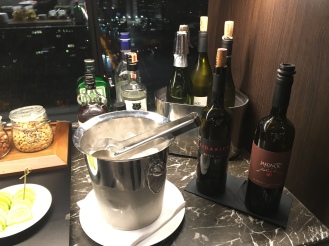 Throughout the stay we enjoyed some wonderful service from all the staff at the Club Lounge.

Especially Meta which we had the pleasure of welcoming us must of the time made sure our glasses never went empty and made us feel at home. Her genuine style of hospitality is a big asset to the hotel and the Club Lounge and embodies the service and quality se came to expect from an InterContinental hotel.

For breakfast you can either choose to go eat upstairs in the 20th floor in the main restaurant (with a gorgeous open air terrace which must be lovely when there is good weather) or in the Club Lounge. 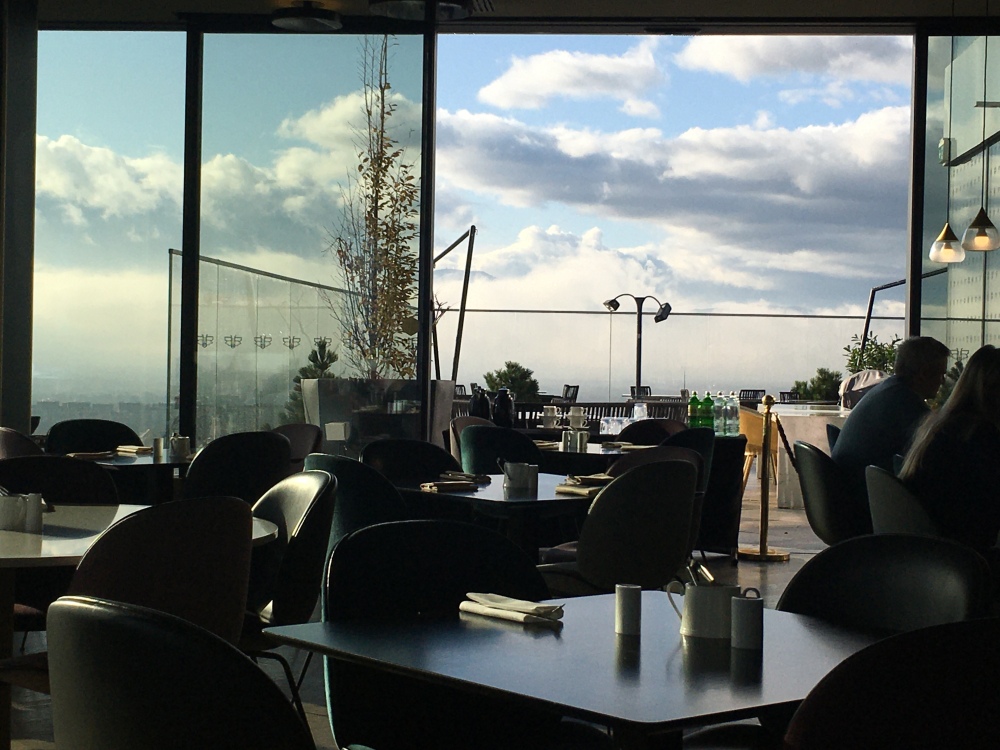 The first morning we tried out the breakfast in the main restaurant, the welcome there wasn’t very warm but we received a nice table in the middle of the restaurant. We were given a menu with the different made to order warm dished we could have and asked whether we would like some tea or coffee which was all brought to our table. I ordered some black tea and some eggs  benedict which were served in a nice portion without drowning in the sauce.

Except for the menu there was also an extensive buffet including hot and cold options both traditional hotel breakfast items and some local specialities. 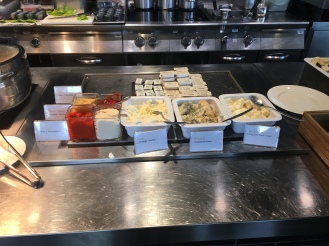 The second morning we took our breakfast in the Club Lounge, there was a much warmer welcome and a much calmer atmosphere.

If you ever stay there, go for the Club Lounge breakfast it’s much more pleasant.

We were also offered the same made to order menu and a choice of coffee or tea. There was also a small buffet set up, which offered slightly less options than the main restaurant but still more than enough to over eat yourself. 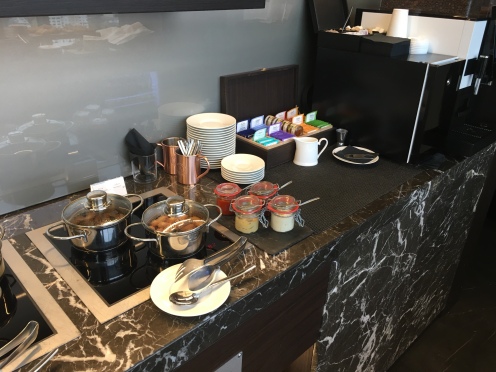 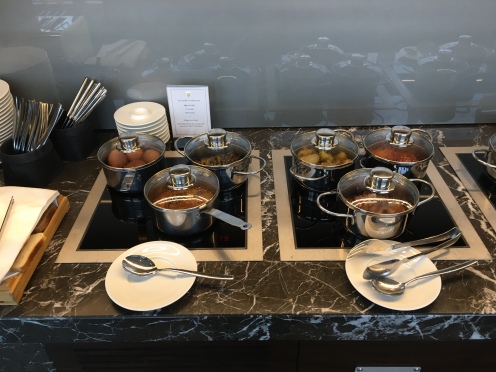 After our wait in the Club Lounge on the day of arrival, about 30 minutes into sipping our tea the lounge attendant came over with our keys and told us our room was ready.

We were allocated an executive suite on the third floor. It was built around a sort of cove with the corridor (lit up by a beautiful light sculpture in the wall) running from the entrance to the window, with the bathroom extending outwards on the right hand side, the bedroom on the left and the sitting room extending outwards on the left hand side.

The bedroom featured a huge and comfortable bed, only the pillows where a bit on the soft side for us. In the wardrobe we could find the bathrobes and slippers.

There was also a small desk area perfectly suited for Timothy to work on. Next to the bed where a number of switches, with one general switch to switch everything off (very handy) and also two switches to open and close the curtains automatically.

The sitting room featured a large sofa looking out over the main street below. There was also a second TV, a minibar and the tea and coffee making facilities as well as two complimentary bottles of water (thanks to my Ambassador status). 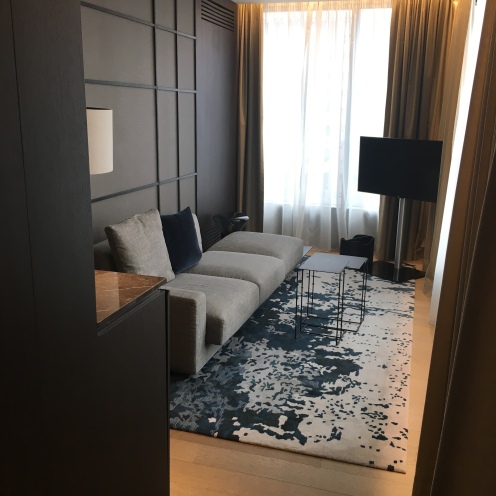 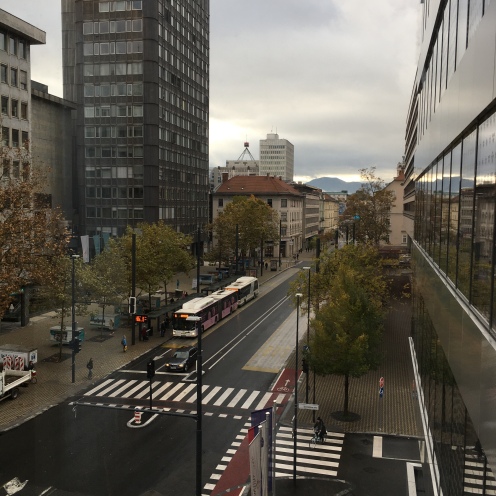 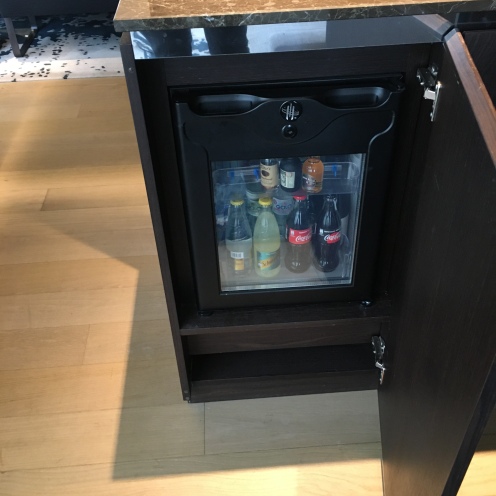 The bathroom alone was larger than the average hotel room in London and the French term ‘salle de bains‘ is actually more accurate in describing it. In the main area there was a beautiful and large bathtub which was perfect to take a relaxing bath in.

There was also a big sink and mirror next to which you had two frosted glass doors. The one on the left leading to the toilet (with an automatic flush, took me awhile to get used to), the one on the right to the walk in shower. 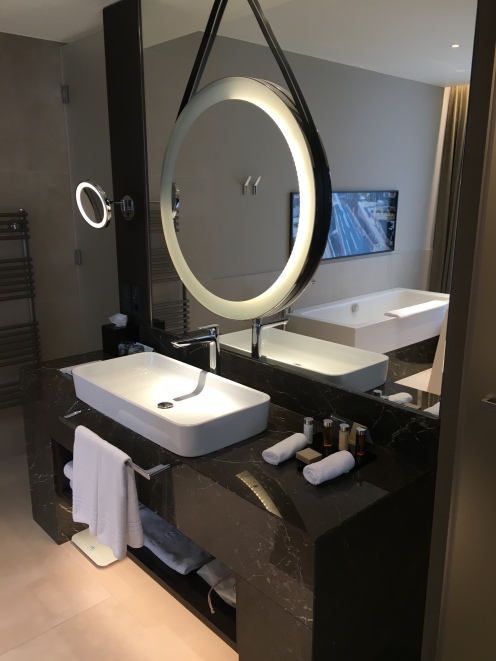 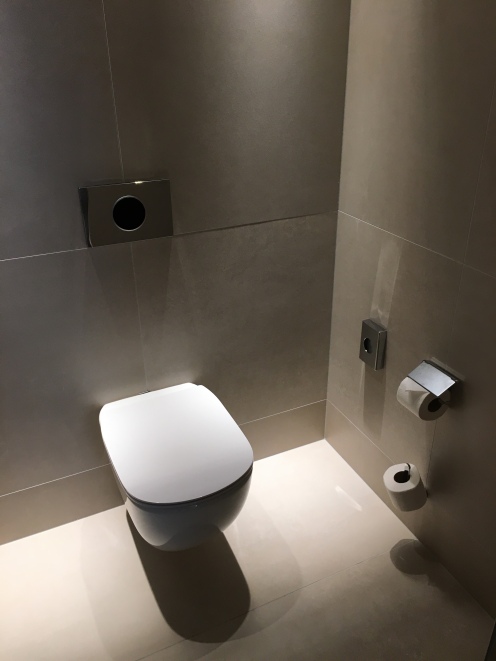 The shower was wonderful and button operated, with both a rain shower head above, a handheld shower head and some side shower heads built into the wall (reminding me of my shower in the hotel in Sankt Moritz).

The products on offer where made by Anne Semonin and provided a nice subtle perfume. Plenty of towels where available and even a toothbrush and comb where proactively provided.

One of the nicest things the hotel has to offer is without doubt the pool and spa area on the 18th floor. It also boasted some floor to ceiling wrap around windows providing for a panoramic swim, just like in InterContinental Warsaw.

The main pool was rather cold and surrounded by some interesting looking relax chairs, around the corner was the warmer Jacuzzi and some more traditional beds. In the wall they also built in a sauna, a steam bath and an infrared cabin.

Alongside the pool in a different room was also the nice and well equipped gym to work off all those calories you gained in the lounge. 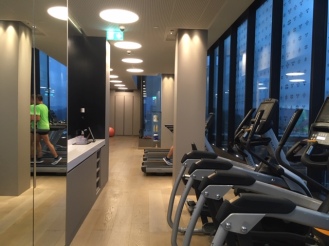 We had a very satisfying stay at the InterContinental Ljubljana and we will go back to explore some more of Slovenia in the future. In my opinion it currently is one of the best InterContinental properties in Europe, so don’t hesitate to try it out and discover the city of Ljubljana in Slovenia!

Which is your favourite hotel in Europe, and why? Let us know in the comments below!