On our way to Ronse / Renaix, Danny and I stopped shortly in Oudenaarde. We did a brief walk in the city center.

Ronse has the third oldest railway station still in use in Belgium. To get from Antwerp to Ronse (or Renaix in French), you can travel via Brussels or via Ghent. If you choose Brussels, you’ll switch trains in Oudenaarde.

Oudenaarde, in French Audenarde and sometimes in English Oudenarde with only on A was founded in 974.

The city’s Golden Age came later. In the 11th century, Oudenaarde’s economy flourished, thanks to the proximity of the Scheldt and to the burgeoning, but vibrant cloth and tapestry industry. Churches, cloisters and hospitals were built.

Throughout the Middle Ages, the city was one of the staunchest supporters of the counts of Flanders, defending them against insurrections from the South, and even from Ghent.

The city became known as the residence of the nobles. It built itself a flagship town hall (built 1526–1537), which we can still admire today, and the Saint Walburga Church.

We only had an hour so we walked from the railway station to the Markt (Market) with it’s (late) medieval buildings. We walked until the Centrum Ronde van Vlaanderen (CRVV or Tour of Flanders Centre), a must-see for cycling fans. Which we aren’t.

A bit of Mexico

In between the station and the Markt there’s the Tacambaroplein or Tacambaro Square. In between car parking spots, there’s the Monument to Tacámbaro: a woman looking in the direction of Mexico. 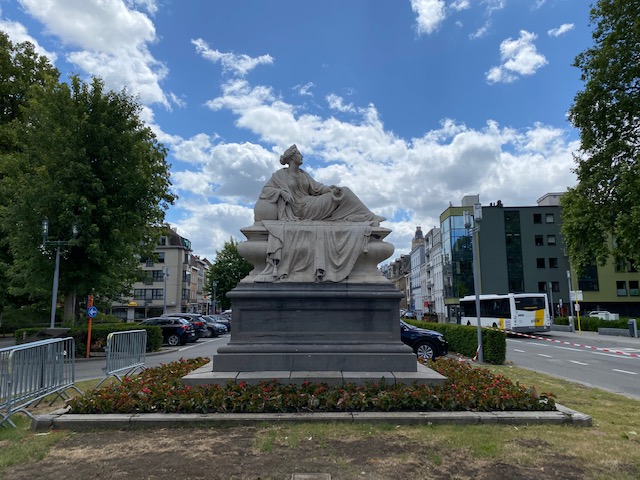 It commemorates the Battle of Tacámbaro of 11 April 1865. The battle, named after the town in which it was fought, pitted 300 members of the Belgian Legion supporting the Second Mexican Empire against approximately 3,000 Mexican republicans.

This is a lesser known episode of Belgian history. The Belgian Legion acted as personal bodyguard to the empress Carlota of Mexico, née princess Charlotte of Belgium.