Normally I was supposed to be travelling around France in the month of March, visiting Lyon and the Burgundy region. Unfortunately the COVID-19 pandemic started and the trip was cancelled. As by the end of June the borders of Europe started to reopen and some travel opportunities started to be had my good friend Gillis and I decided to go for a weekend to Lyon to make up for our lost trip to France in March.

We booked an early TGV departure from Brussels on Saturday morning to make most of our time there, unfortunately due to track works I was not able to get into Brussels on time by train from my home town of Antwerp. As a solution we decided to spend the night near the South railway station in Brussels, and there was no better option then the Pullman Brussels Centre Midi hotel located inside the station itself. I stayed there once before when I left for a different early TGV departure a few years ago and I remember it being a comfortable and modern hotel.

As of course the virus was still around, you could see a lot of measures being implemented. There where routes roped off to separate ingoing and outgoing guests, to avoid contact as much as possible. As we arrived late in the evening at about 21:30 we had no wait and the receptionist swiftly checked us in from behind her Plexiglas screen. Unlike the previous time the staff at the welcome desk did speak Dutch and was able to explain us everything in Dutch, which was a vast service improvement.

The room itself was of a nice design, and very well sound proofed as you could not hear any sounds from outside. There was a lack of power outlets however, with only 1 side of the bed having one, not very useful if you both want to charge your phones overnight. The beds themselves where a bit on the firm side and very short, especially for European standards. Both of us lying on our backs had out feet sticking out from the end of the bed, which is not very comfortable for sleeping. 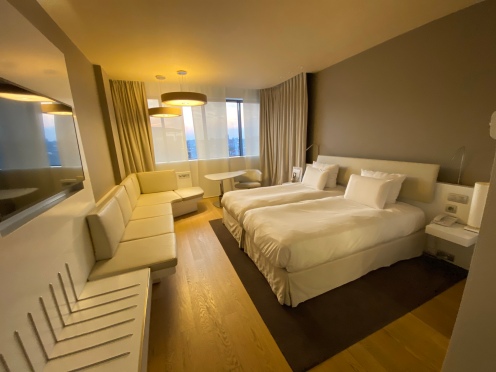 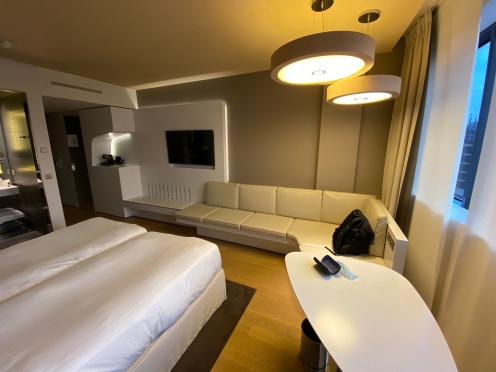 Due to Corona measures the normally complimentary minibar was empty, but you could ask for a complimentary water bottle at the welcome desk (which they did not tell us at check-in but we found reading the fine print on the information leaflet in the room).

The tea and coffee making facilities where still available for use however with a nice selection of teas and coffees. The only downside being that the coffee maker was a fancy model using coffee cups, neither Gillis nor me where able to get it to work and as there was no instant coffee Gillis had to go without his morning coffee.

The bathroom itself looked very fancy and offered some nice individual products. There was only 1 set of towels provided, but after a short call to the Welcome desk a second set was brought up instantly. The toilet could be found in a separate room around the corner, just like in Novotel properties (which is not surprising as Pullman is sort of an upscale version of Novotel). 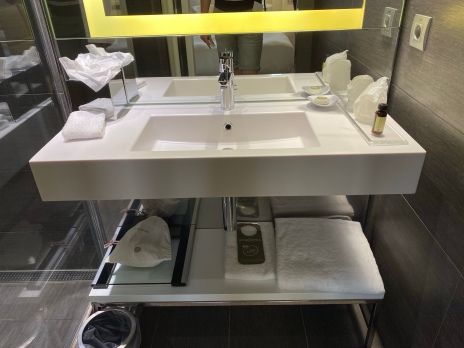 The shower was heavenly with a big rain shower head providing very good water pressure and temperature, but this also made the biggest flaw float on top. The drain did not drain, meaning the entire room was flooded after we showered. We mentioned this during check-out and they noted it down so hopefully this was fixed before the next guests arrived.

The night of the arrival I came straight from work so I wanted to grab a quick bite to eat. Unfortunately due to the Corona measures in place the restaurant was closed and you could only eat something from a very small menu either via room service or in the bar.  We selected to sit down in the nicely decorated bar, enjoying a glass of wine. 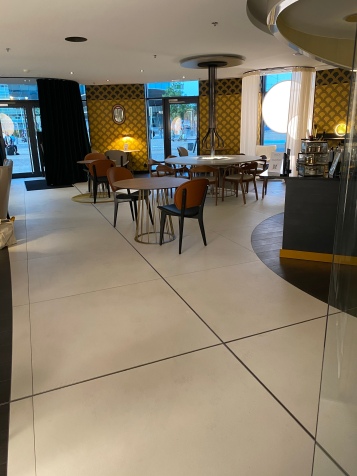 While I had ordered a 4 cheeses pizza, Gillis had to take a charcuterie plate as he as a lactose intolerant person can’t eat anything with cheese. The food was edible but not very memorable. You could also pre-order a limited breakfast, but it was only served as from 6:30, the same time as our train departed. 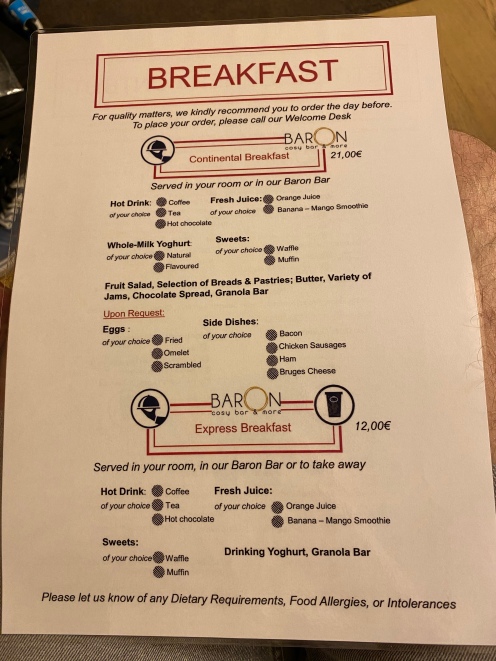 The late serving time really is inexcusable in a station catering to people travelling on early morning departures, I would expect a basic breakfast service to be available from 5:00 or so, even if it’s only pre packaged items. As the late serving time and the bad price-quality ratio wasn’t very appealing to us we decided not to have breakfast.

All in all it was an acceptable stay but the hotel does still have some points for improvement. It serves well as a place to stay the night before an early train or after a late arrival if you are stranded in Brussels South station, if the price is right.

I wouldn’t go out of my way to stay there however as I’m sure there are hotels with a better location in Brussels if you are there on business or visiting as a tourist. I also had the impression that the Corona measures were used as an excuse to cut costs in corners where it wasn’t necessary like the abysmal food offering.

I get it that hotels and the travel sector are having a hard time staying afloat and are doing everything they can to avoid going under and I do hope that they will be able to succeed and keep serving us in the future, but not at all costs to their public.

Have you been travelling since the Corona-pandemic has started? And how are your experiences with Corona measures in hotels? Let us know in the comments below!