If you want to travel from Brussels in Belgium to Amsterdam in The Netherlands by train you can choose the Thalys or the Eurostar. But you need to reserve a seat. You don’t on the intercity train called the Benelux.

The Benelux service started on 29 September 1957 and has since had different routes and obviously different rolling stock. You can see an old Benelux driving trailer (cab car) at the Spoorwegmuseum in Utrecht.

But the idea hasn’t changed: a train service between Amsterdam and Brussels. It is operated with Nederlandse Spoorwegen (NS) rolling stock, NMBS /SNCB engines and mixed personnel.

In the 1950’s there were plans to continue to Luxembourg in the Grand Duchy of Luxembourg. But according to Wikipedia those plans were abandoned partly due to inadequate rolling stock. 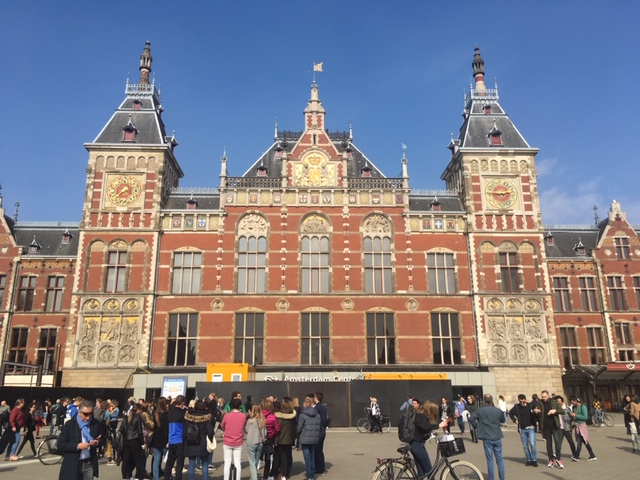 The major difference between those two routes is the use of the high speed lines, cutting the journey by some 30 minutes. The current route is scheduled to be 2 hours and 54 minutes.

So late March we decided to travel the full journey. I went to Brussels and hopped on the train at Brussels-Midi/Zuid. A short delay between North and Zaventem was made up before entering Antwerp. In Antwerp-Central Danny joined me for the rest of the journey.

The trip was smooth and uneventful, which you want and expect. There’s no bar coach but between Antwerp and Rotterdam some slave student will come by with hot beverages, soft drinks, cookies and powerbanks.

But it’s more interesting to buy some food and drinks before boarding. In the big stations there a quite a few options, except in Noorderkempen.

You will also notice the Benelux trains use two locomotives. For good reason. It doesn’t need to shunt at Brussels and Amsterdam and in Breda the train changes direction.

Some fifteen minutes after arriving in Amsterdam, we already left for Haarlem, Leiden and Breda. Haarlem was one of the stops in the early history of the Benelux-train.

It also let use the old Sprinter by NS and the SNG or Sprinter Nieuwe Generatie.

Originally we wanted to go via Roosendaal but engineering works made going home via Breda more practical.

The Benelux is a practical way to travel between Brussels and Amsterdam. Ticket prices vary according when you buy. Buy in advance.