As reported by Wiener Zeitung, ÖBB (Austrian Federal Railways) expects to start a Nightjet service between Vienna and Brussels in January 2020 and another to Amsterdam in 2021. 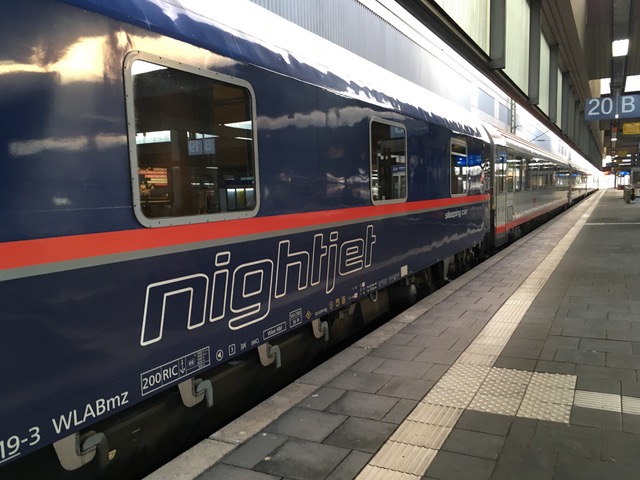 Currently no timings have been released so we will have to wait for the new European timetable data of 15 december before the timetable of the new service might be publicized.

According to a user of the German railway enthusiast forum Drehscheibe Online, the new service would be running twice weekly to Brussels instead of Düsseldorf.

It would leave Vienna for Brussels on Sunday and Wednesday night, and Brussels for Vienna on Monday and Thursday night. The main reason for this service pattern is to serve the Austrian Eurocrats commuting between their place of work for the European Union in Brussels and their family homes in Austria for the weekend in an environmentally friendly way.

As from 2021 the train will be operating from Düsseldorf onwards to Amsterdam, the Brussels branch will receive it’s own dedicated group of coaches which will decouple somewhere in Germany (most likely Cologne).

As nowadays coaches operating in UIC mode (doors unlock automatically when driving slower than 5 kph) are not allowed on the Belgian network, they where forced to think of an alternate solution. This results in the Innsbruck portion of the train being emptied and closed off in Aachen and the staff used to guard the doors of the Vienna part in Belgium.

While they originally planned to use a Lineas TRAXX locomotive between Aachen and Brussels to haul the train they ultimately decided that a NMBS/SNCB Type 18 locomotive will be used instead.

This leads us to believe the train will be routed over highspeed lines 2 and 3 between Brussels and the German border, enabling a civilised arrival and departure time.

Of course we will keep you updated and as soon as we know more details or a timetable we will post it here!