As Timothy and I felt like taking a weekend break to end the year, we decided to go for a weekend in the Slovenian capital Ljubljana.

After a way too short weekend break in Ljubljana, we had to fly back home. Just like on the way over we flew via Paris to Amsterdam, as at the time of booking this was the cheapest and most convenient option of getting there.

We took a private shuttle arranged by the hotel and after about a 30 minute ride we arrived at the airport. The Airport is managed by Fraport, the company behind Frankfurt Airport and several other airports throughout Europe.

Currently they are building a new and bigger terminal to replace the older one (still dating back to Yugoslavian times). The current terminal is quite small indeed, there are a few check-in desks in the departure hall with some historic planes suspended from the ceiling. The security check was extremely fast, with no one in front or behind us we were through in less than two minutes.

Airside the terminal was a bit bigger, with a lower level for bus boarding and an upper level where you had some gates with jetways (where our plane would also dock) 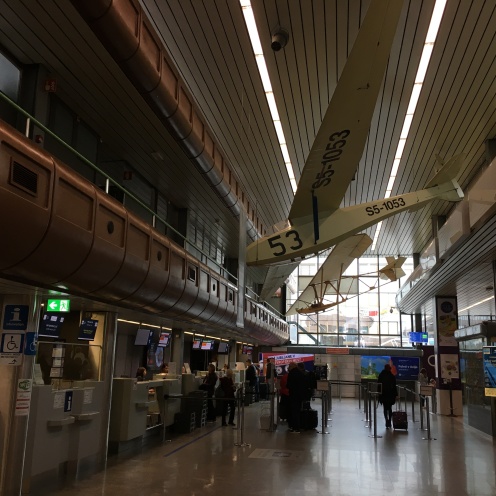 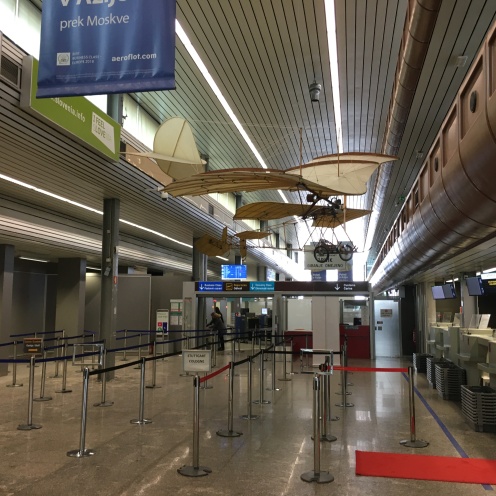 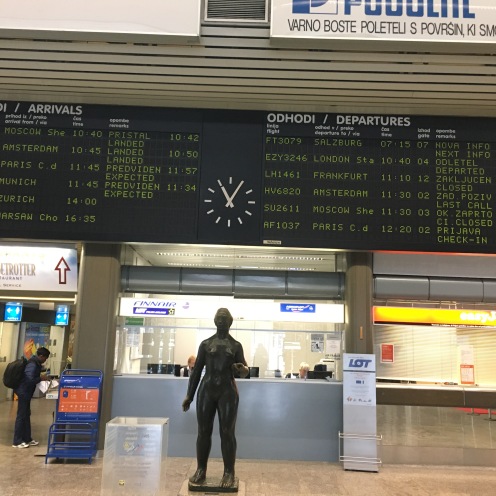 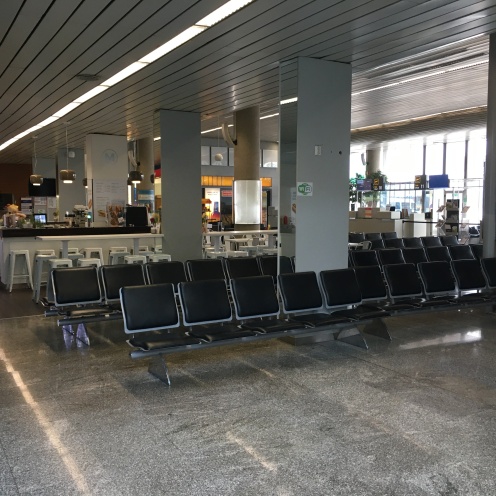 The terminal was rather quiet on this Sunday morning as only a handful of flights where scheduled to depart, the biggest plane at the time we were there was an Aeroflot Airbus A320 bound for Moscow.

As soon as our plane touched down on the runway, boarding started. Our boarding passes and passports where checked and scanned and we were lead into a glass corridor in between the waiting area and the outside wall, where we had to wait in line until the previous passengers had left the aircraft and it was cleaned.

In my opinion they could have started boarding a bit late and just let us directly on the plane when the turnaround was complete, having to make people wait in a corridor for 15-20 minutes is a bit ridiculous. 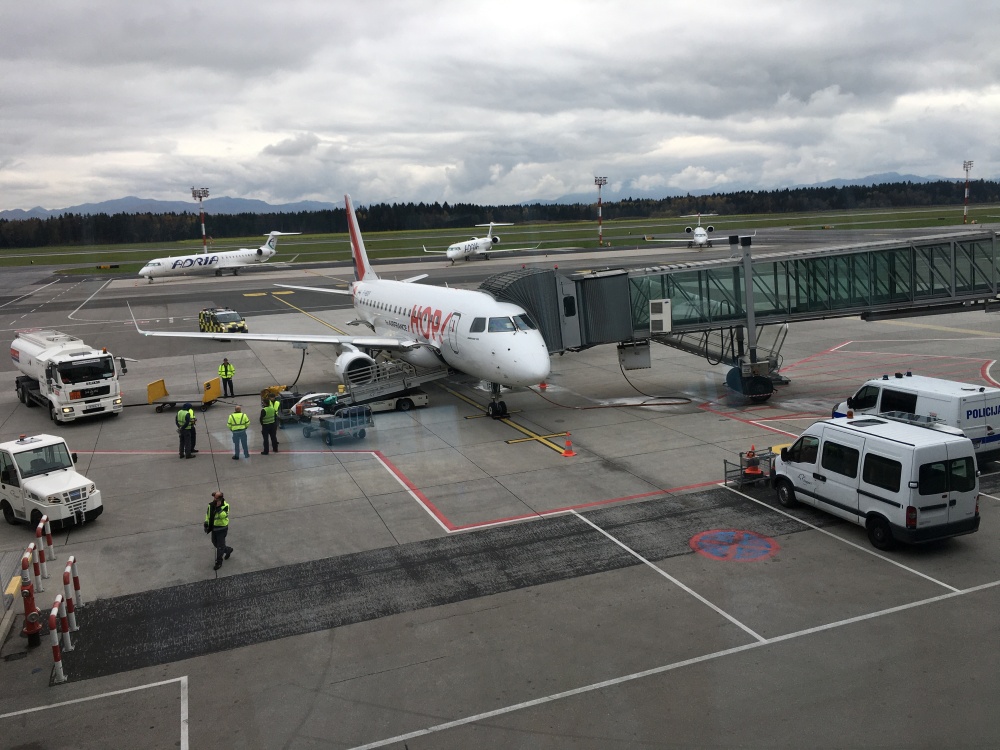 The plane for this flight was the exact same Embraer 170 as on the way to Ljubljana, only this time we were seated further back and at the opposite side of the plane. Seating was in a 2-2 configuration and leather seats, with even the legroom in the rear part of the plane being quite good for a regional jet. 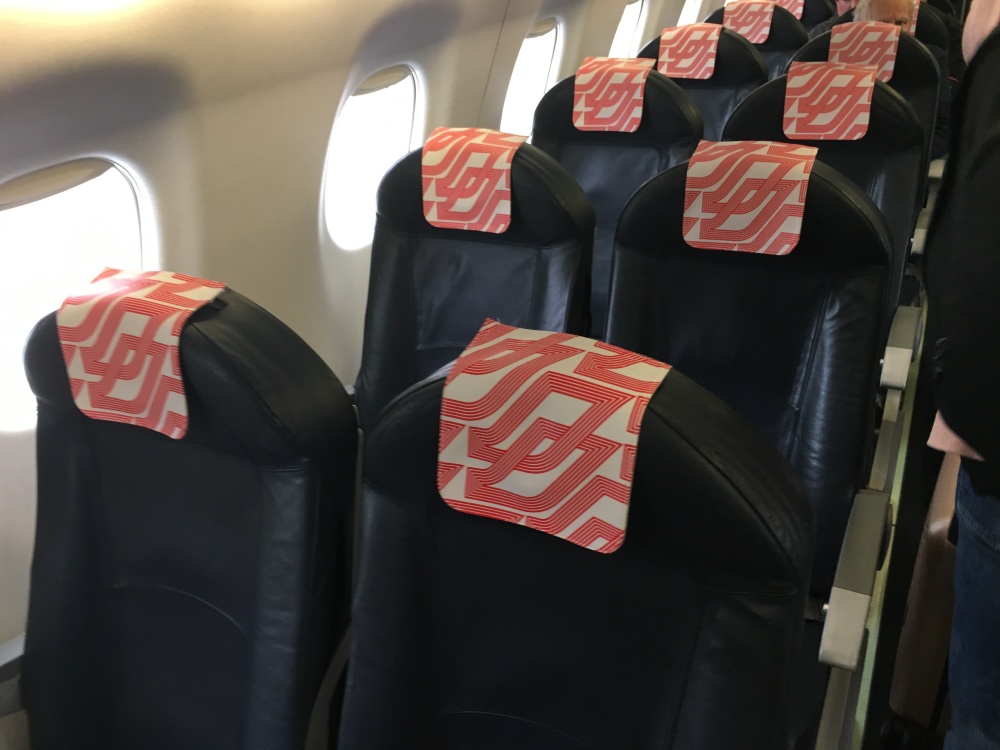 Boarding was completed very fast (as everyone was standing in the corridor already), and we where off in no time. Take-off and the first part of the cruise was quite scenic as there where little clouds and we could see the valleys and hills of Slovenia going over into the Alps. As we crossed the Alps the flight got a bit turbulent and the seatbelt sign was switched on multiple times. 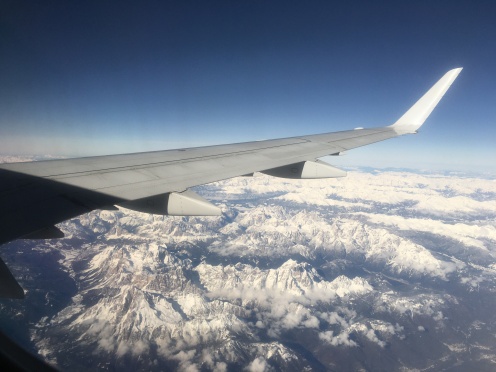 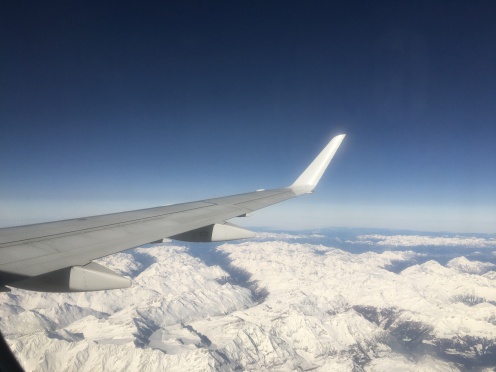 The crew on this flight was a bit uninterested and gave the impression they were working the flight against their will. There was no warm greeting at the door upon boarding and service took quite a while to get started after we got airborne.

About halfway through the flight the crew started their service and we were served a choice between a cheese or a tuna sandwich, I choose the cheese sandwich, which contained cheddar and some sort of cream cheese with herbs spread on it, a very delicious combination.

Timothy had the tuna which was a bit spicy according to him. Alongside we where also served a drink, as it was noon I decided to go for a coke. The catering was already better than the crackers or cookies we could choose on the flight to Ljubljana but it was still a bit underwhelming compared to what KLM manages to hand out on a flight almost half the flight time. 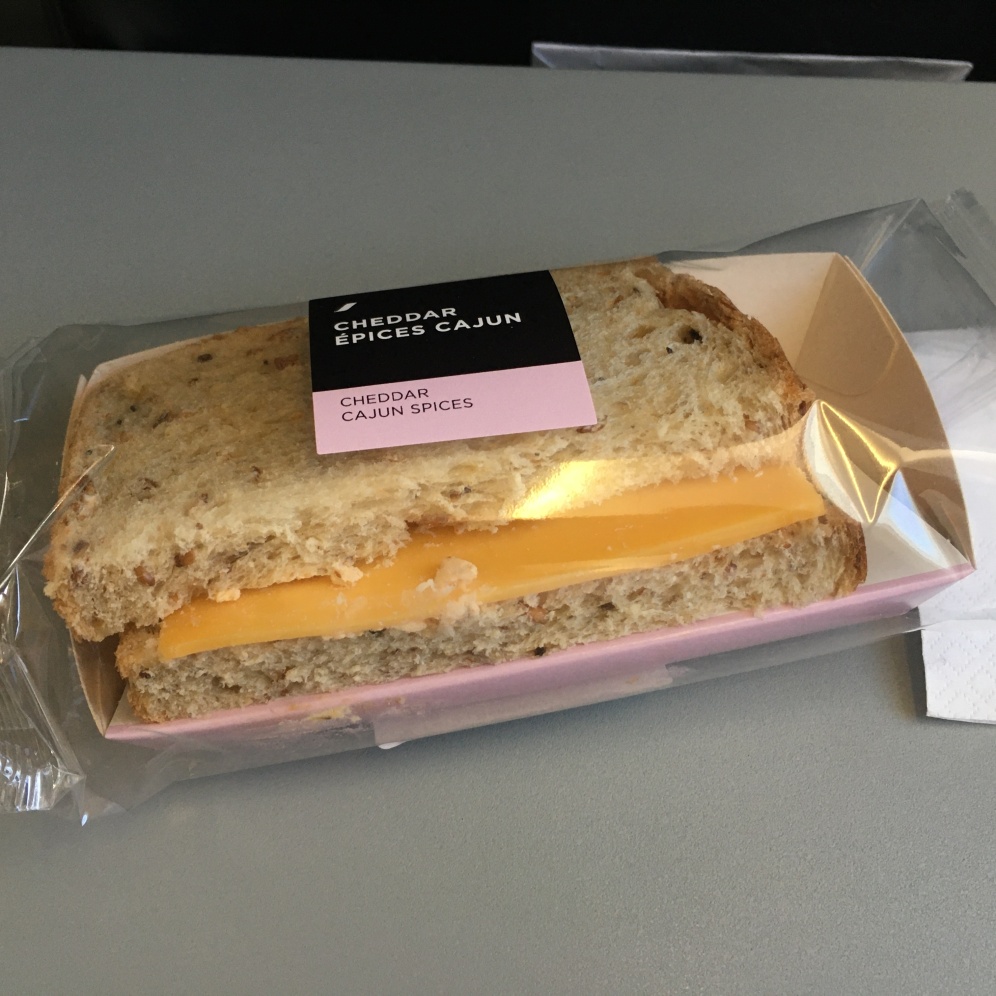 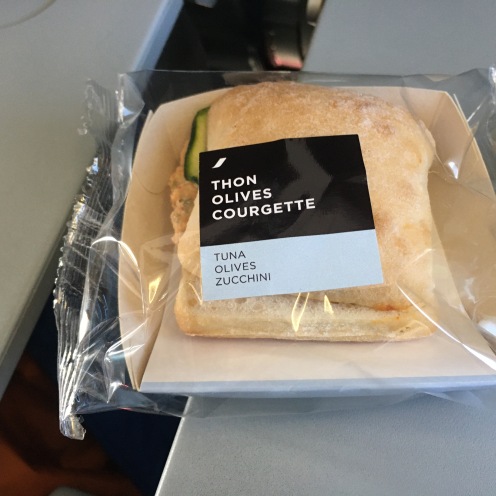 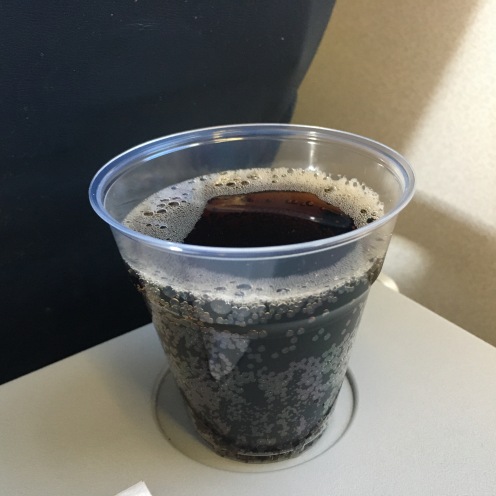 The landing into Paris CDG was uneventful and our flight soon parked at terminal 2G, where HOP! Planes have their hub. As our connecting flight to Amsterdam would leave from Terminal 2F we made our way through the maze of corridors in Terminal 2G towards the shuttle bus to takes us to 2F. 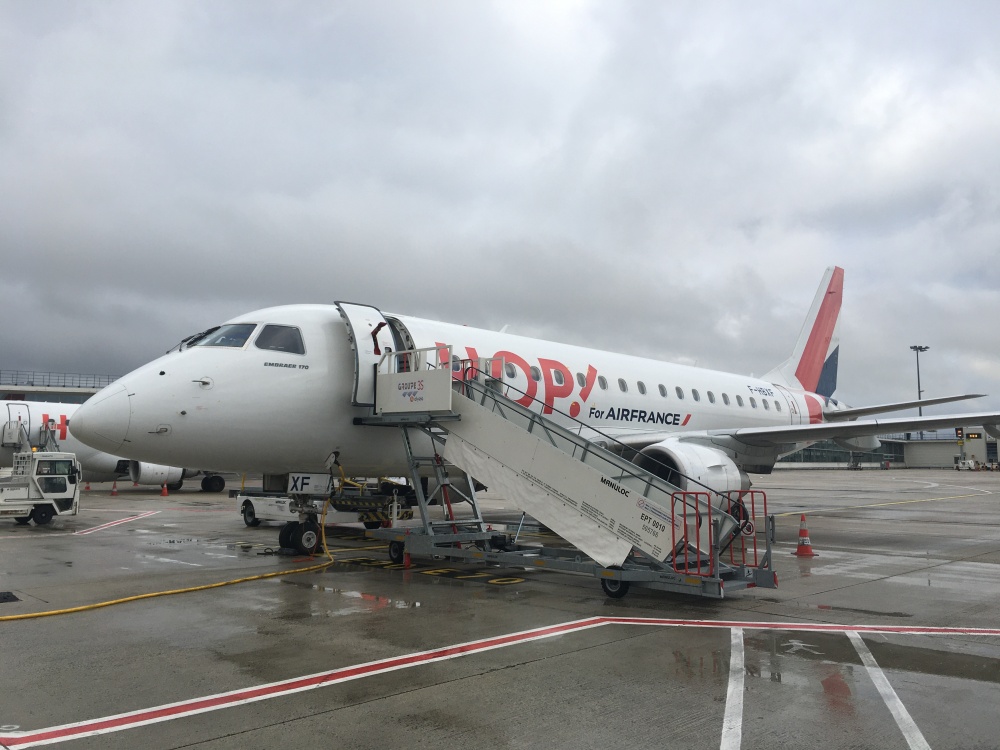 This flight also didn’t leave me very impressed with Hop! , they offer an okay but mediocre product. There is nothing wrong with it, but also nothing that makes them stand out. Would I fly them again? Maybe, but only when they have the best offer as I would not go out of my way to fly them.

What is your favourite European regional airline? Let us know in the comments below!