After a weekend in London, Steve I returned to Belgium with the 17.55 Eurostar to Brussels. Tó the United Kingdom we traveled in Eurostar’s e320 (aka Siemens Velaro). On the return journey we got a refurbished e300, aka British Rail Class 373 or TGV TMST.

For a technical overview, I refer to Wikipedia.

From the outside, the e300 looks more boxy than its German little sister introduced in 2014-2015. 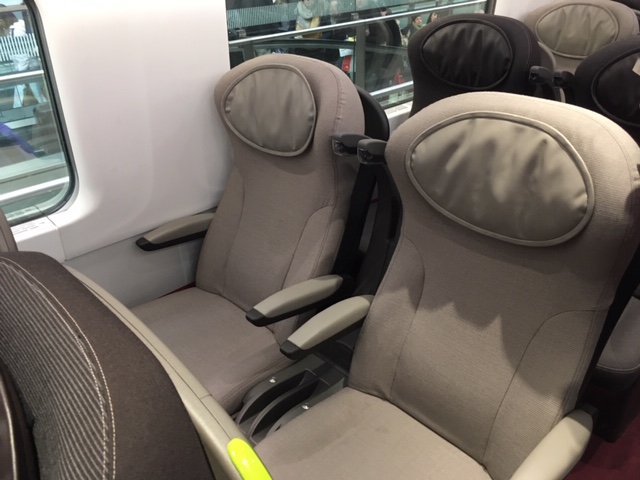 We appreciated the power outlet options. Twice we had a continental power outlet and USB ports to charge your device. Sometimes you have to look for the outlets. They can be situated in the seat in front of you or hidden under the armrest.

The main difference for the travel experience? Tunnels. There are quite a few tunnels on Eurostar’s journey between St. Pancras International and Lille-Europe in France. The e300 isn’t pressurised and you feel it in your ears.

But mostly the experience is very similar. The light dinner is much nicer than breakfast on Eurostar. Our dinner consisted of chicken with goat cheese and tabbouleh. Carrot cake as dessert and you also get water, wine or a soft drink and tea and coffee.

What do you think of travel with Eurostar?