Our last hotel on the trip was the InterContinental Toronto Centre, located right next to the Toronto Union station and the famous CN Tower. It offers a perfect location to discover Toronto, with lots of things within walking distance and a good access to public transportation to venture further out into the area. 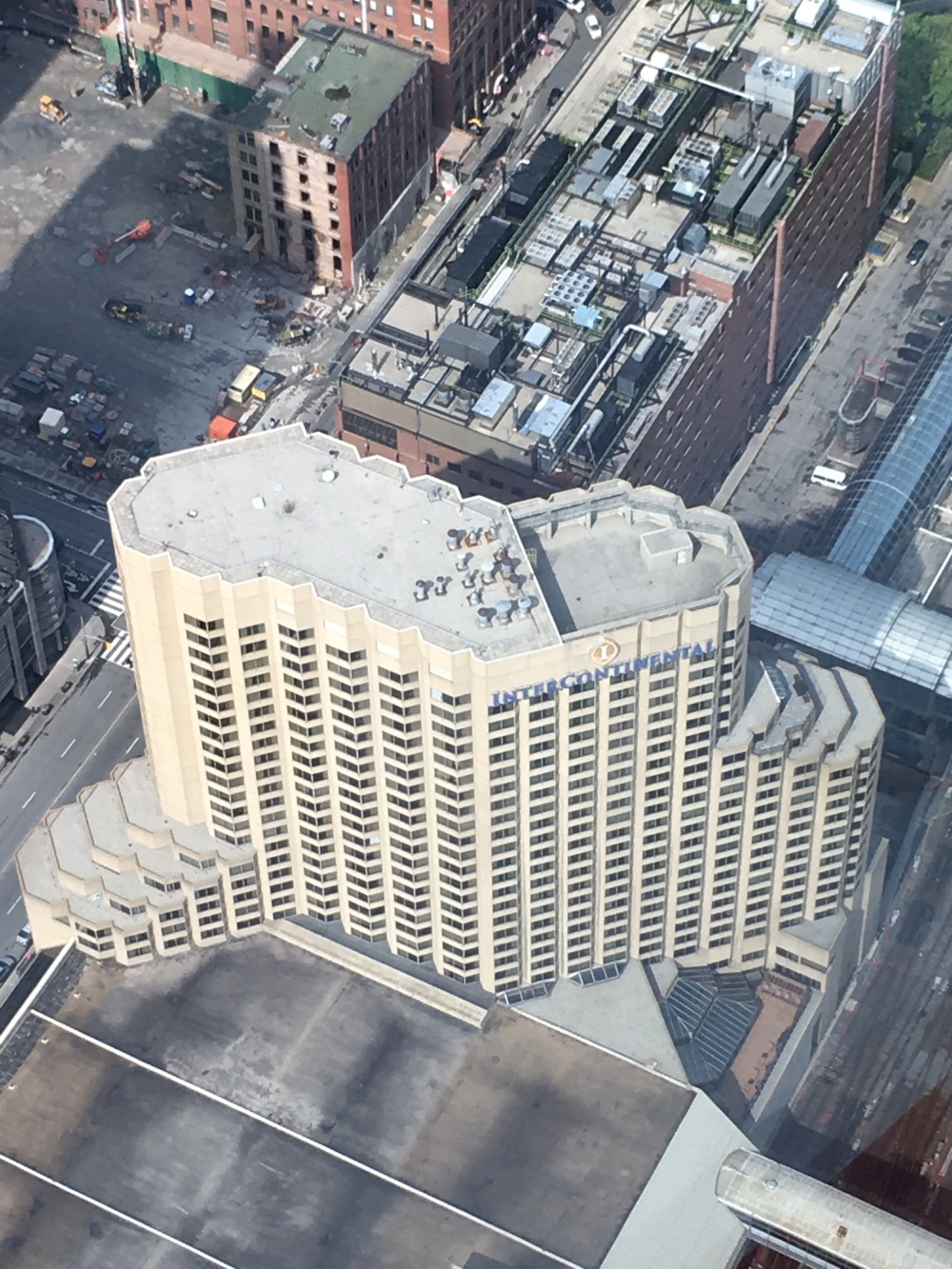 Upon arrival we were greeted by a very friendly and welcoming lady at the dedicated IHG Rewards Club counter, as it was only 1PM and rooms are normally only available as of 3PM she went out of her way to get us a room immediately. As the hotel was fully booked they were unable to give us the complimentary Ambassador upgrade and gave a compensation of 10,000 rewards points instead.

As I booked a club room we were allocated a club room on the 8th floor, where the club lounge was located as well. It was a spacious recently refurbished room with two queen beds. There were two sofas and a small table near the window overlooking the station, ideally located for some reading. 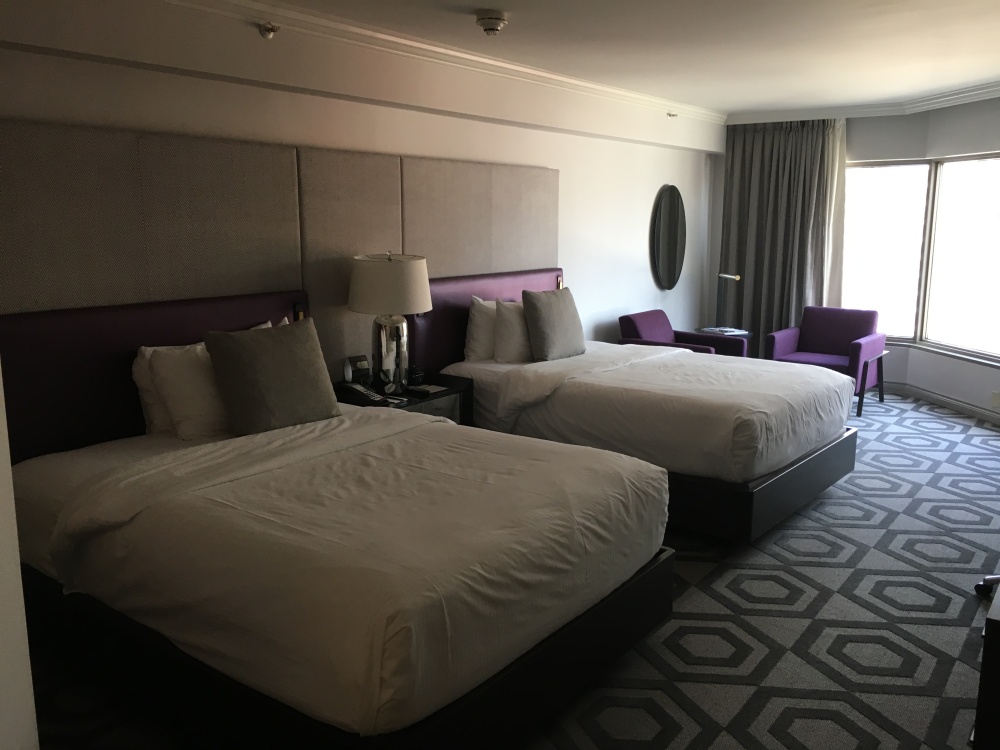 Along the wall opposite the beds was a big desk area with a wall mounted TV above and a Nespresso machine to make your morning coffee. 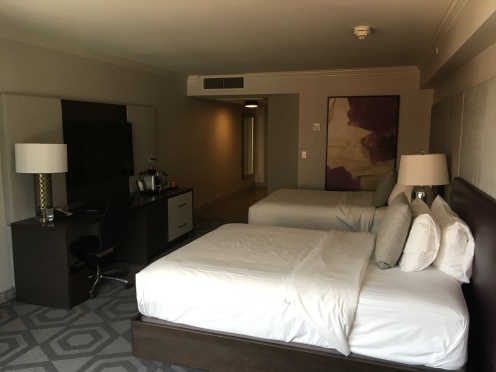 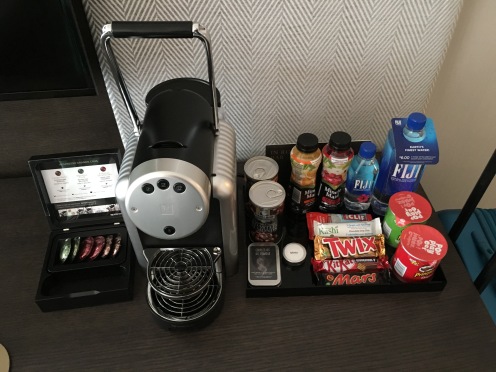 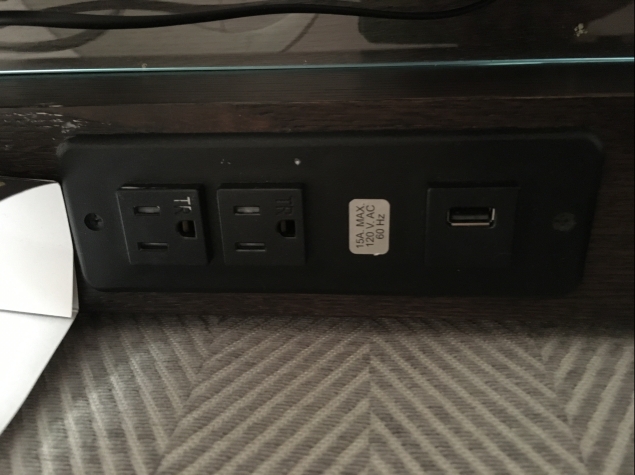 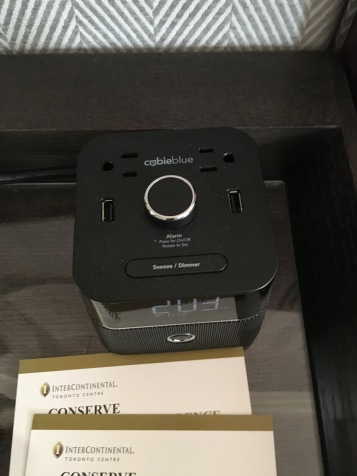 The bathroom was small but well designed and featured a very nice rain shower with a good closing door, not leaking any water into the bathroom. 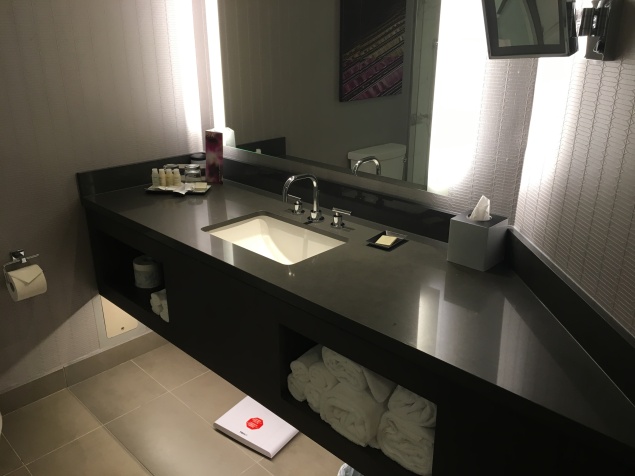 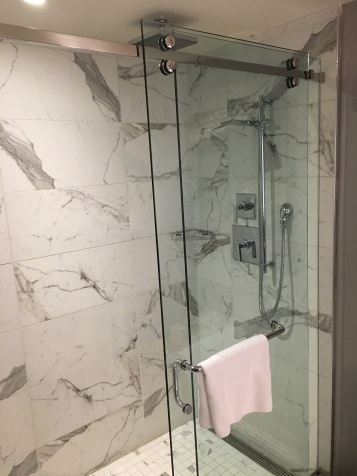 Contrary to Montreal there were enough towels provided for four persons in the room, initially there were only two pairs of bathrobes and slippers but two more were brought up immediately after asking the lounge manager. The toiletries where of the slightly more upscale Aveda brand and had a very nice and subtle rosemary mint perfume. 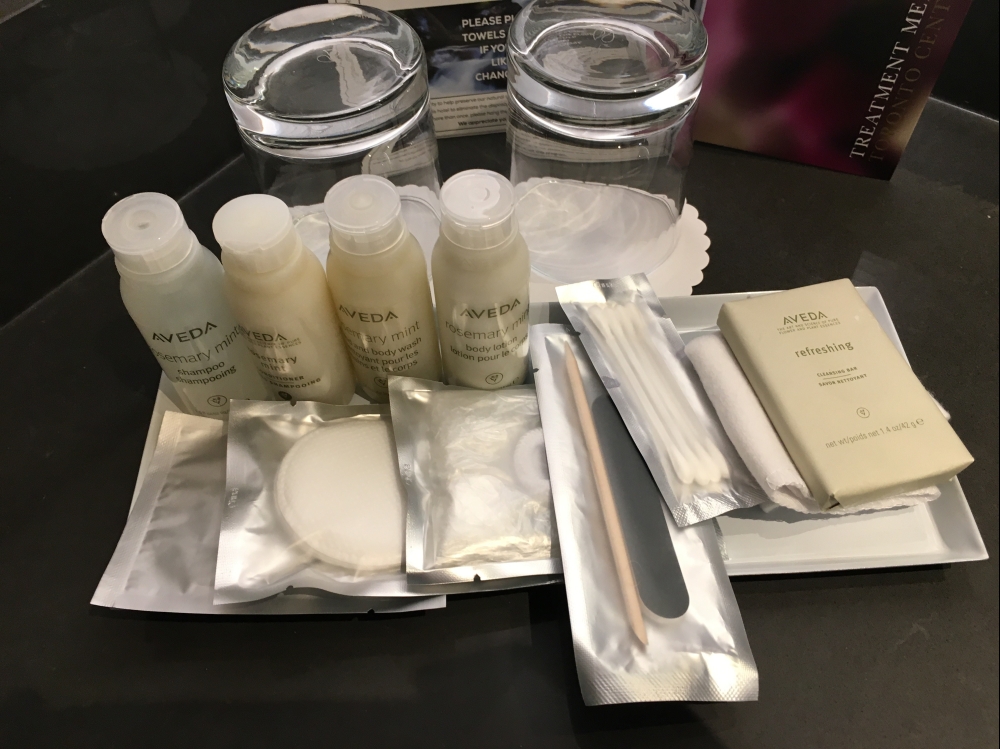 For my parents’ birthday the hotel also delivered a small cake to celebrate. 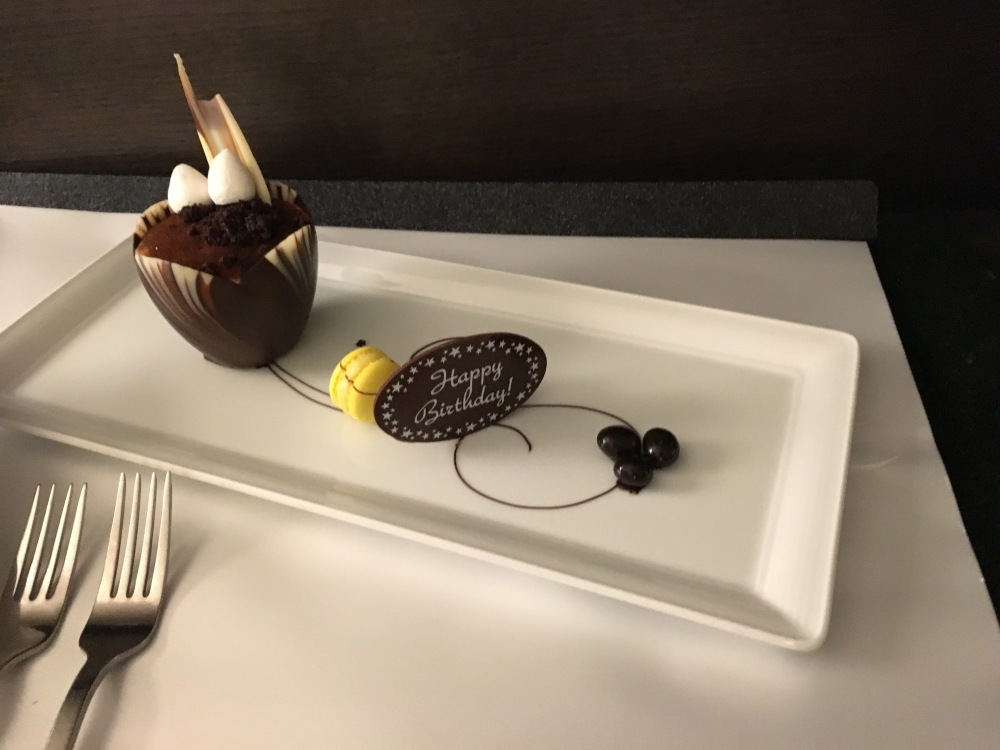 As our room was located on the 8th floor, we had to walk only a few steps before we could enter into the lounge area. It was divided into several smaller nooks with the central area boasting the welcome desk where the lounge attendants were ready to assist you.

Right next to them was the bar, while non-alcoholic drinks where complimentary there was an honesty bar in place for your alcoholic drinks as Canadian law doesn’t allow hotels to serve free alcohol to their guests. Whenever you wanted to drink a glass of an alcoholic beverage you had to fill in a small paper and the amount was charged to your room bill. 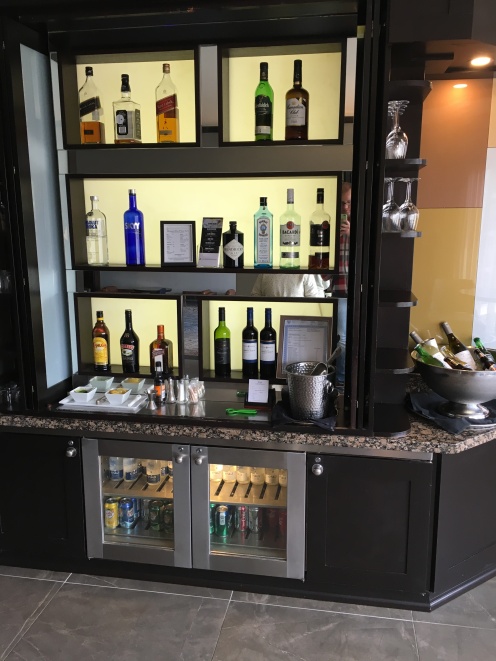 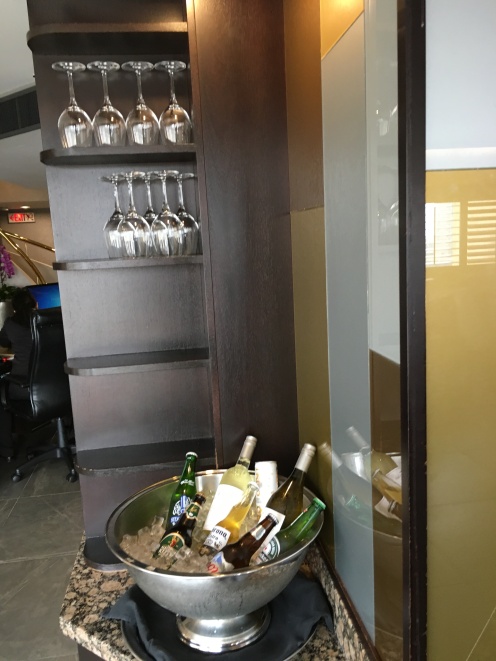 Behind the corner of the bar area was the food area, here you could also find some infused water and the coffee and tea facilities. 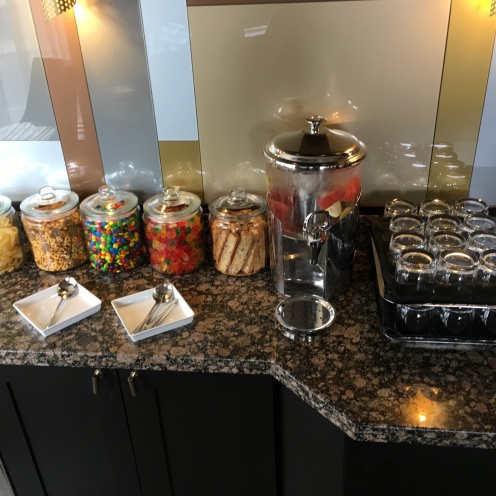 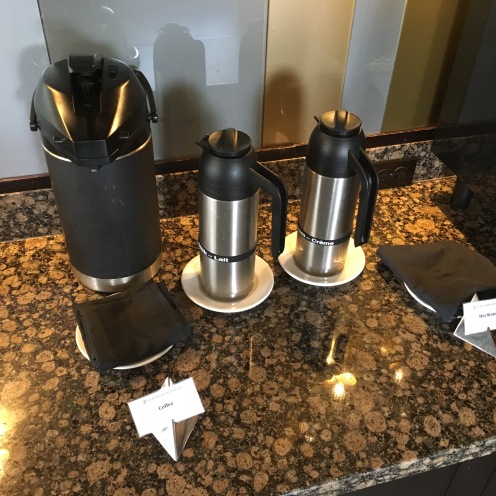 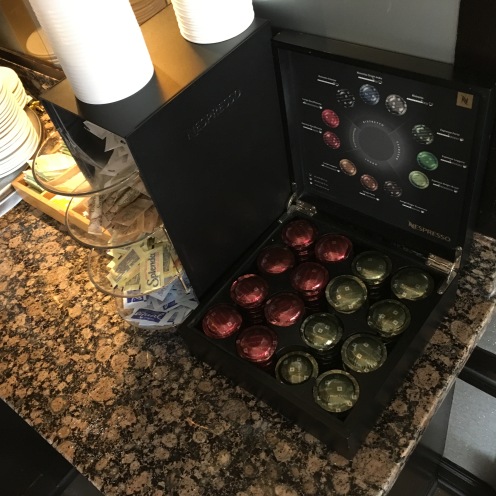 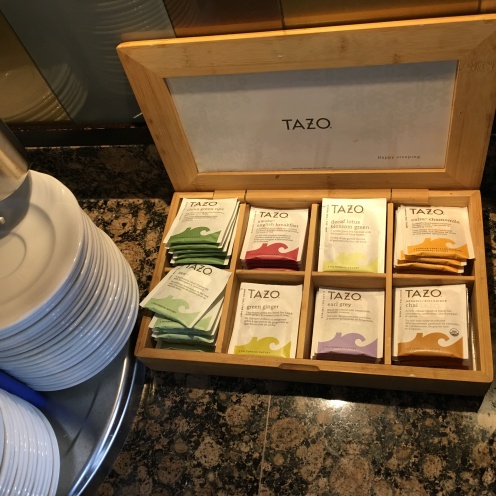 In the rear where some more tables to sit, while at the opposite side of the entrance there was a library/media style room with some books and big TV. A toilet was provided around the corner in the corridor, but of course going to your room was also an option as it was almost equally close.

In the morning a breakfast was served, containing some hot and cold items. The types of eggs varied each day, alternating between scrambled eggs and omelettes. The rest of the offer remained pretty much the same every morning and contained some of the typical breakfast items. 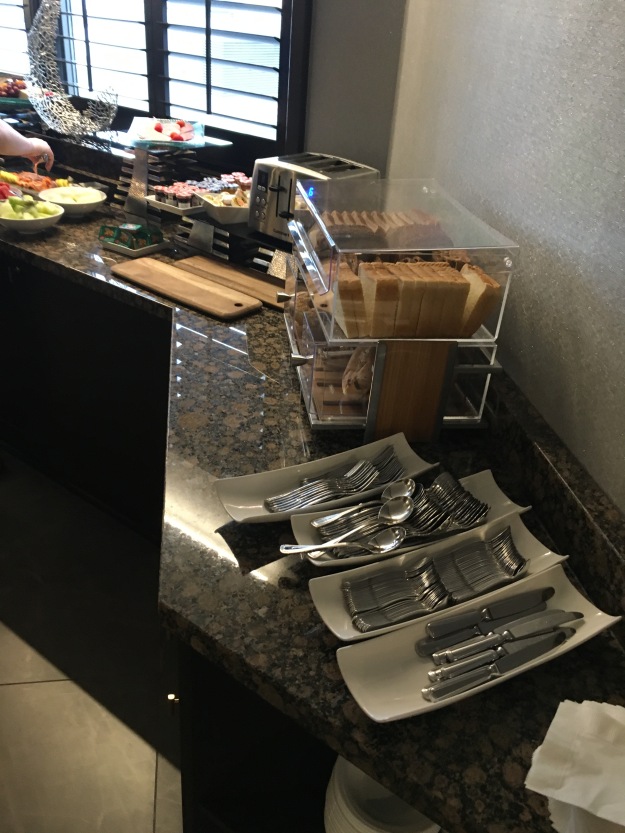 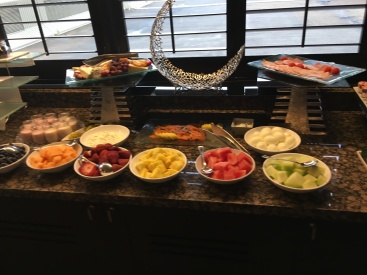 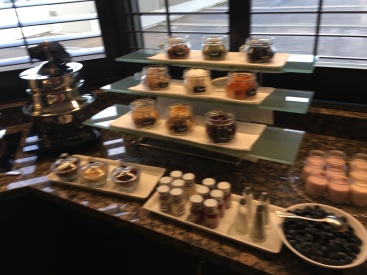 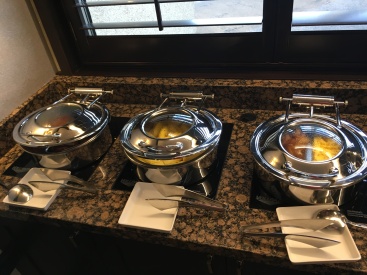 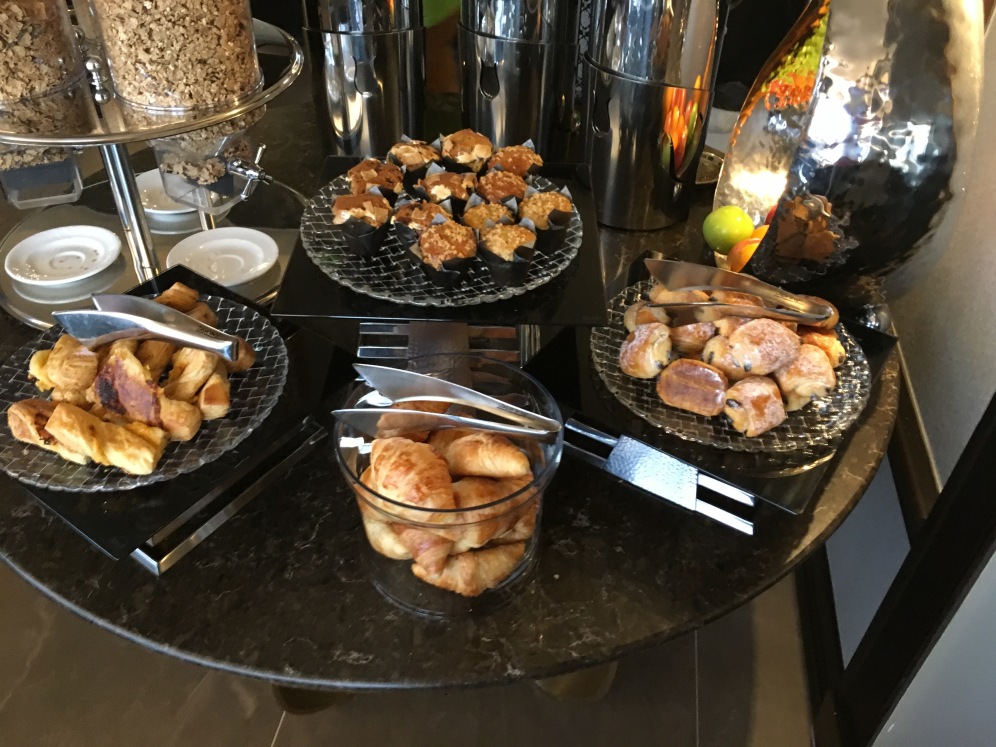 In the afternoon they served ‘afternoon tea’, but do not expect to have an elaborate offer as you would in expect in the United Kingdom. Here they only served two types of scones (plain and chocolate) together with some clotted cream, strawberry jam and chocolate paste. The taste and quality of the scones was excellent however. 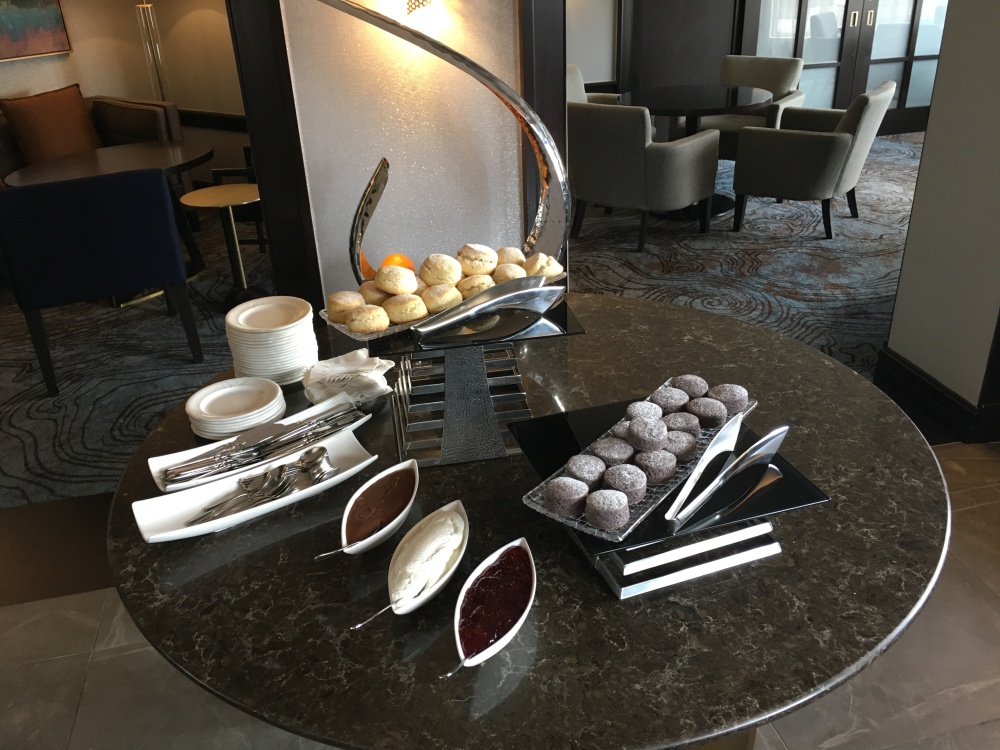 In the evening they served some more food, if you are not a big eater like us you could easily have a proper meal with this. There were of course a number of cold options like salads and a wonderful cheese platter as well as a few hot options. 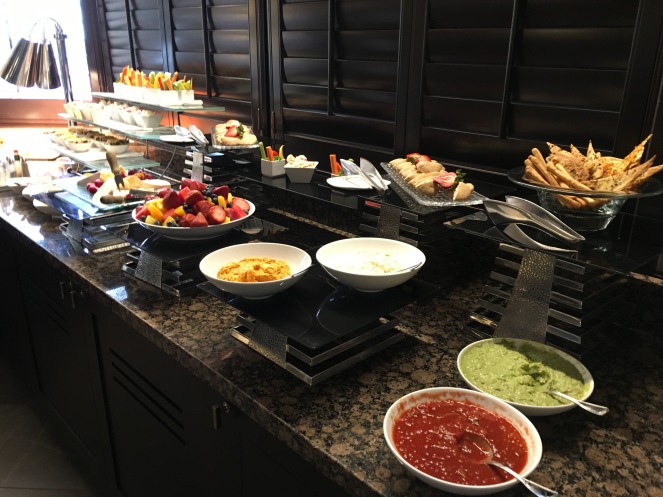 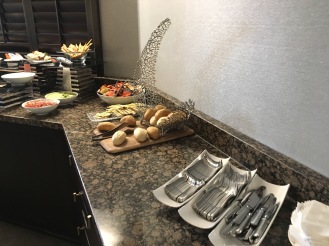 Every night the buffet had a different theme. The first night it was American themed and it had build it yourself burgers and fries. 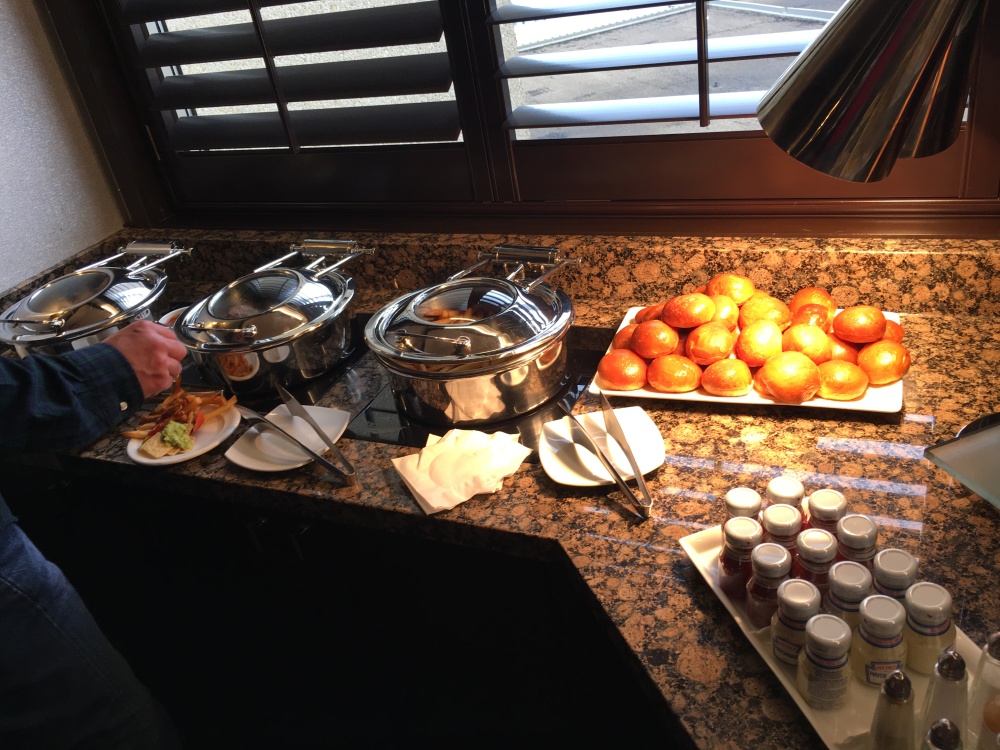 On the second night it was Indian themed, with some typical Indian dishes. On the third night it was my favourite night as it was Asian themed and they served some delicious sushi! 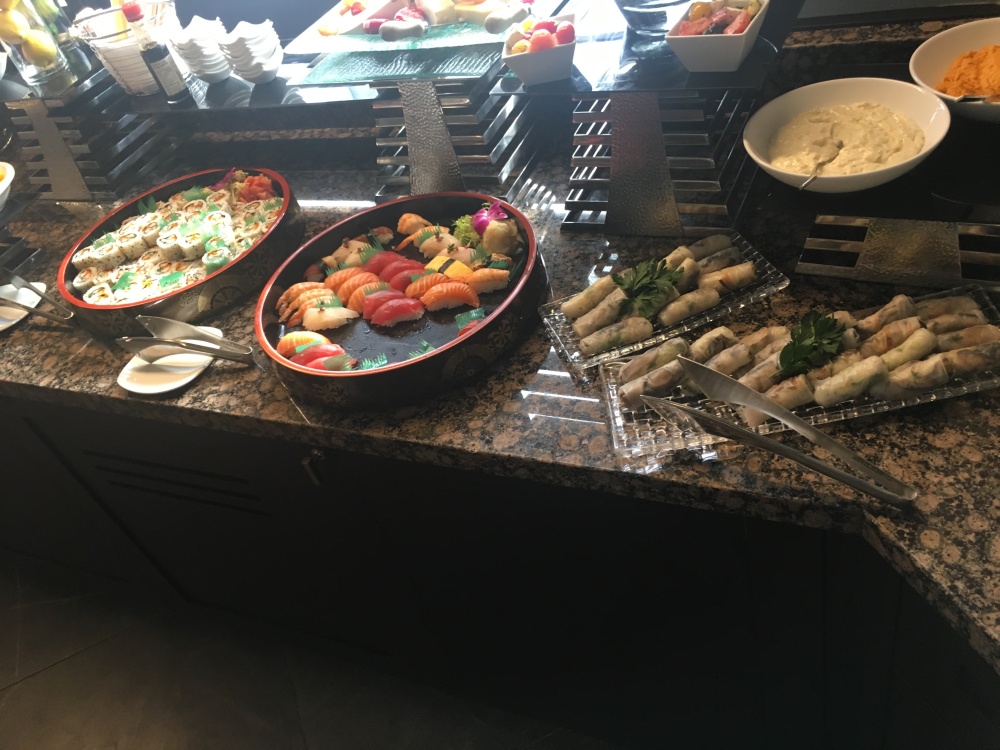 The last night we could settle into a more European vibe as they opted for a Greek/Mediterranean theme. Every night we had some delicious tasting food and the changing of the themes made that you did not get bored of the lounge food.

Whenever the lounge manager, Mr. Mavromatis, was present everything in the lounge ran like clockwork and it was a very enjoyable experience. One night when he was not present the young Asian man running the lounge was not able to hold up the standards as tables where not cleared away and it was hard to find some place to sit as all tables were filled with used plates, cutlery and glasses.

To work off all the fat layers you gained by indulging in the lounge food, the hotel offered a fitness on the 3rd floor, it had two big windowless rooms with a number of machines to exercise with. To me it felt not like the most welcoming fitness however. 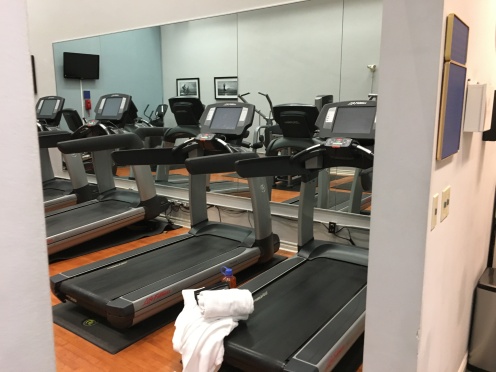 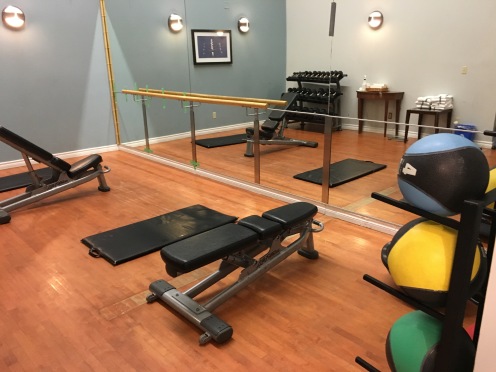 Next door to the gym there was the pool and spa area, which was luckily much more inviting. The main pool was located under a glass dome and enjoyed an influx of sunlight. There was a nice waterfall at one end of the pool, while there was a shallow children pool at the other end. 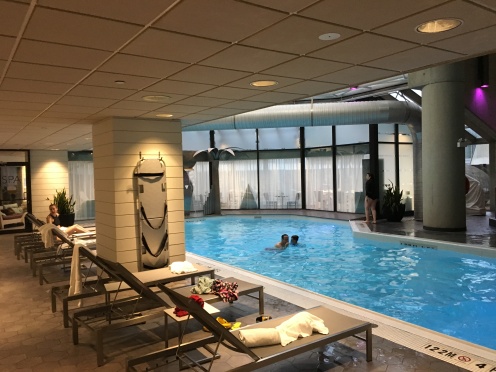 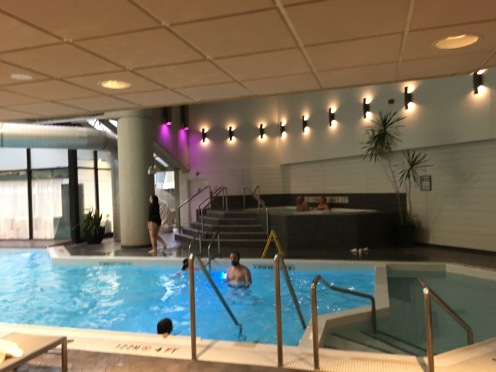 To the side was a hot tub/whirlpool which was ideal to relax your muscles after a busy day of sightseeing and walking around. At the side of the entrance and dressing rooms there were also a number of loungers, but when the pool was busy it was difficult to get one. Along the walls there were plenty of towels on the towel racks, so you would never run out of towels to use. If you wished to use a steam room there was a gender dedicated one available in both the male and female dressing room areas.

Most of the staff was very friendly, helpful and knowledgeable and enabled everyone to have a nice and care-free stay. The only hiccup during the stay was the one night the club lounge was a mess, but I’m sure the hotel will have dealt with this to keep up its high standard. I would recommend staying here, as the location and facilities are fantastic and it was a great ending for a great holiday.

What is your experience with hotel club-lounges? Do you like them? Let us know in the comments below!