The best deal to fly there was offered by Lufthansa, we set off from Brussels to Montreal with a change in Frankfurt on Lufthansa’s venerable Airbus A340-300 while we would return from Toronto via Munich to Brussels and fly their brand new Airbus A350.

After a wonderful time travelling around Canada, unfortunately the time was there to return home. To get to Toronto Pearson Airport we used the UP Express train, conveniently departing from Toronto Union station, located right next door to our hotel the Intercontinental Toronto Centre. The UP Express platform is a modern addition west of the classic main station building and there is a pre boarding ticket check.

A two coach air-conditioned Diesel unit is used on the route, with ample storage for baggage, comfortable seats and complimentary WiFi.

It takes about 25 minutes to make the journey from the city to the airport with 2 more stops on the way. 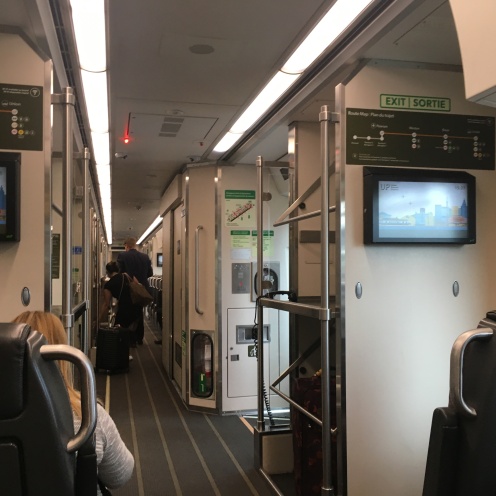 The UP Express arrives at terminal 1 at the airport, which is the Air Canada and Star Alliance terminal, people flying from terminal 3 still have to take an airport shuttle train to the other terminal.

The Lufthansa check-in desks are located on row 6, right at the entrance of the terminal when coming from the train station. There was only a short queue for check-in and our bags where tagged and on their way in no time.

The queue at the security check took a bit longer but the check itself was relatively efficient. After exiting the security check we had to go all the way to the hammerhead at the end of the terminal where the international gates are located. This is quite a long trek, but the airport built in an extra fast travellator to get there, which is an experience on its own.

The international gates area was extremely crowded and there was not nearly enough seating near the gates in the central part of the terminal.

The location of the duty-free shops and restaurant made that there was only a narrow corridor in between them and the gates, which quickly filled up when flights where boarding and caused congestion in the terminal. Our plane was also located at a gate hidden behind another gate, so taking pictures of the plane was virtually impossible. 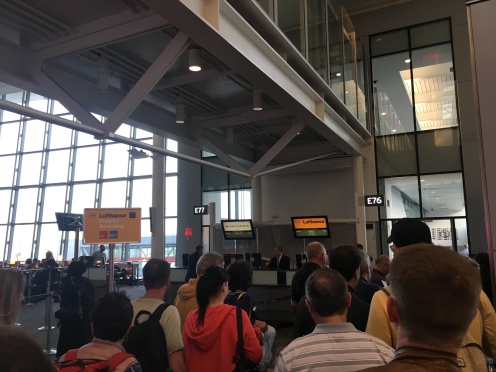 The plane taking us back to Europe was the newest type to enter the Lufthansa fleet, the Airbus A350. It was one of the first of the type to be delivered so it was still painted in the old (and in my opinion better looking) Lufthansa livery.

The economy class cabin was configured in a 3-3-3 configuration. As the flight was originally planned as operated by an A330 I had pre-reserved 2 window and 2 aisle seats, which now meant that there would be a seat in between them so we hoped no one would come and sit in between.

The seats had a nice blue upholstery and an adjustable head rest. Seat pitch was smaller than on the older A340 so I was sitting with my knees against the seat in front. The screen was bigger and the IFE offered a bigger content with outside cameras, more games and an interactive flight map.

On the seat there were also a blanket and a pillow provided just like on the flight to Montreal. Contrary to that flight headphones where only distributed after take-off, so I just enjoyed the outside camera during take-off. 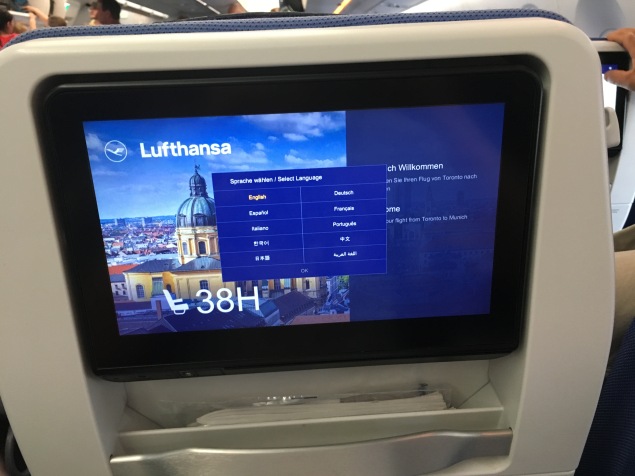 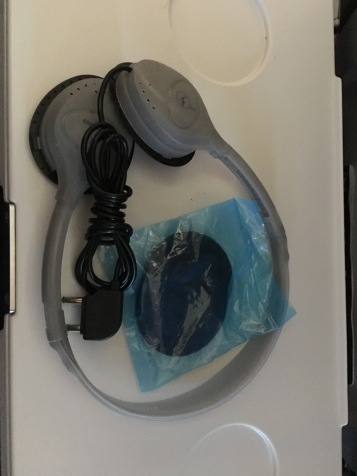 We lucked out in that the flight was not fully booked and the middle seat was empty, enabling us to spread out a bit and use some extra pillows and blankets.

Service once again started with an aperitif and a bag of pretzels, this time I selected to try out the sparkling wine and the friendly flight attendant spontaneously offered a glass of water along with it. After the aperitif service the cabin crew came around with some hot towels to freshen up before meal service. 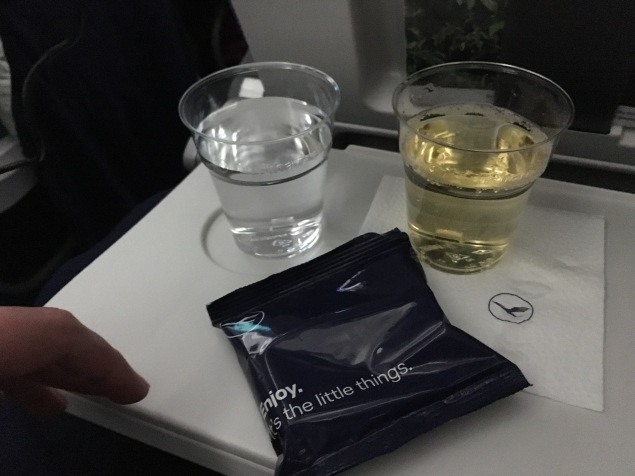 The meal service had two options, chicken or vegetarian. My sister and I selected both the chicken which happened to be the last 2 chicken meals available so our parents the row behind us would have to content themselves with the vegetarian option which was composed of some rice and beans. 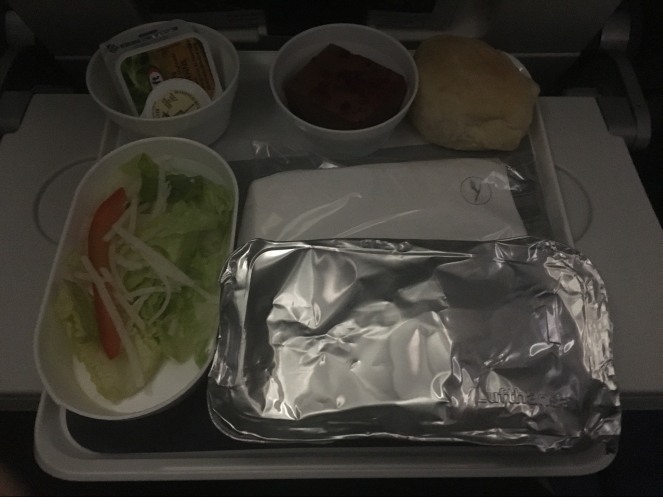 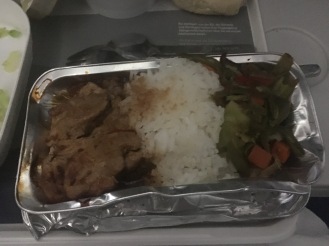 The tray contained some lettuce, and a container of dressing to pour over it but it was quite dull and boring. There was also a soft bun, some butter and a Philadelphia cheese spread.

The main hot main where some chicken stripes in a sauce, some dry rice and vegetables. As a dessert there was a tasteless chocolate cheesecake. Along with the meal I drank some white wine and a glass of water.

While my sister claimed that her chicken was very spicy and she was unbale to finish it (even though she likes spicy food) I found mine quite bland. All in all it was a very forgettable and mediocre economy meal, it was edible and it kept me from going hungry but the catering out of Frankfurt was significantly better.

The meal was wrapped up with a coffee and tea service, after which I tried to catch some sleep. Contrary to the flight to Montreal, this time there no bottles of water handed out which I found disappointing.

After managing a bit of sleep I woke up to got to the toilet, which was still in a very clean state. There were four toilets in the middle of the cabin, as well as two more in the back near the galley.

After waking up it was a little under two hours to go to our destination and I decided to stay awake as breakfast service would start soon.

The breakfast served was a pretty standard pre-packaged affair with a carrot muffin, some kind of red fruit grain bar and the best part some “fresh” fruit. Along with the breakfast I had some orange juice and a tea.

Landing in Munich was very bumpy and the guy in the middle of our row had some arguments with his stomach because of it, having to test out the airsickness bag.

We docked at the new satellite terminal and our connecting flight would be leaving from the main building, as we had only a short connection time of about 1h30, we rushed across the airport.

Strangely enough we were let out directly in the transit area so we did not have to clear security again (which is always nicer not having to go through that ordeal again). We took the stairs down towards the train linking the terminals in the basement. We were lucky in that a train was just approaching and we had a fast and smooth ride towards the main terminal. 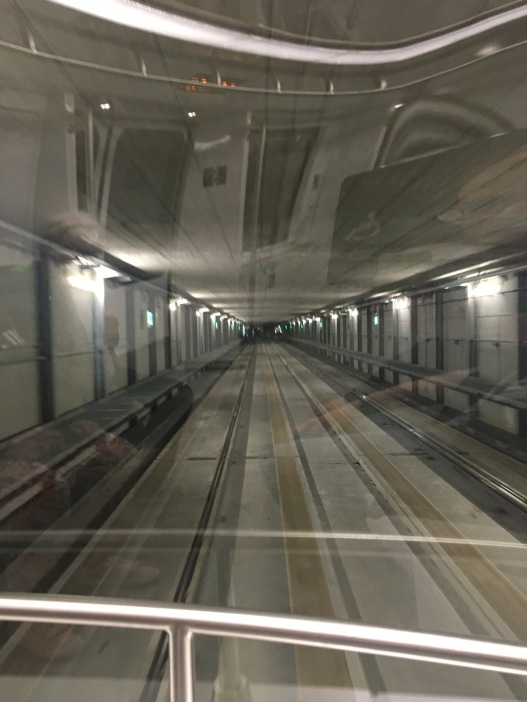 The next stop was clearing immigration, while everyone was queuing at the manned desks we just used the automatic passport e-gates where no one was standing. As our transfer went this smooth we reached our gate at the far end of the terminal with plenty of time to spare.

As there was still a United 787 parked at the boarding bridge of our gate, this could only mean one thing it would be a bus boarding. Surely enough when boarding started we had to go down the stairs into a waiting bus, taking us across the field to a remote stand where our venerable A320 was standing. As it was a plane built in 1990 it must be one of the oldest A320’s still flying around in active service.

The cabin was in a standard 3-3 configuration with the usual Lufthansa Recaro slim-line seats, as it was kept in a good condition nothing of the cabin gave away how old the plane really was. 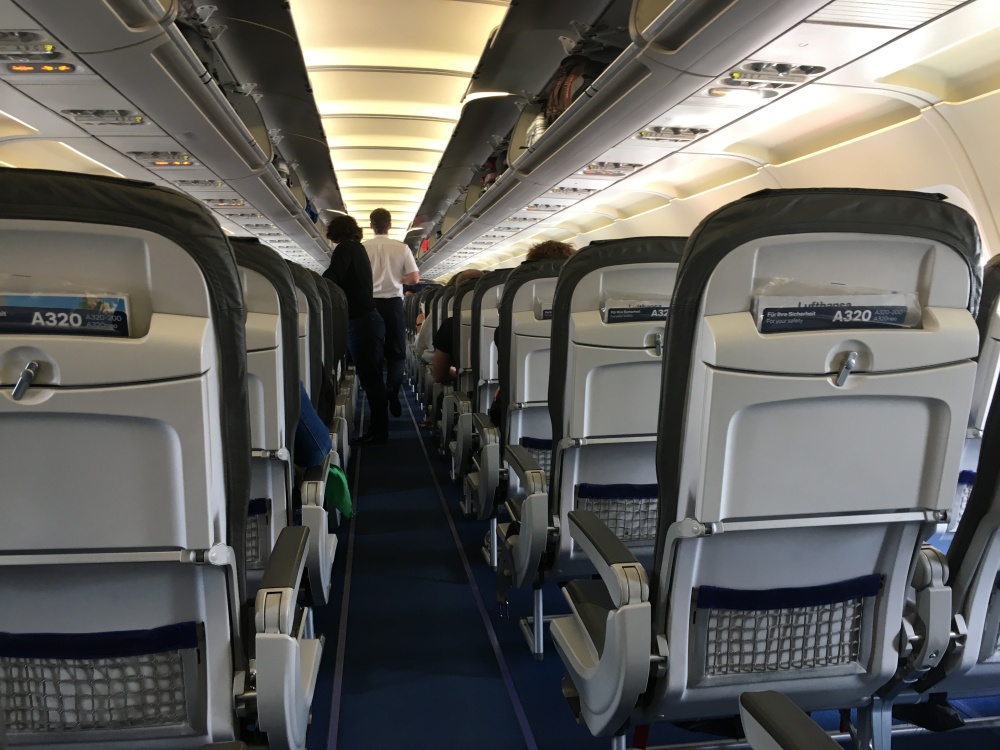 The flight itself was a relatively smooth affair, in the air we were served a sandwich with cheese and egg salad (which was not as dry as Lufthansa sandwiches can be) with a glass of apple juice for me. As usual we landed in Brussels on runway 25L and parked at the usual Lufthansa gate at terminal A.

After a short toilet break we walked on to the baggage reclaim area where, surprisingly for Brussels Airport standards, our bags where already on the belt!

All in all Lufthansa once again offered a good and solid economy product on both flights. You can see that the catering from outstations is not as good as out of their homebase. But then again North American caterers never have been known for their excellent food. On the basis of these flights I would recommend flying Lufthansa on long-haul in economy class.

What are your thoughts on the matter? Let us know in the comments below!

Leave a Reply to The Runaway Palate Cancel reply