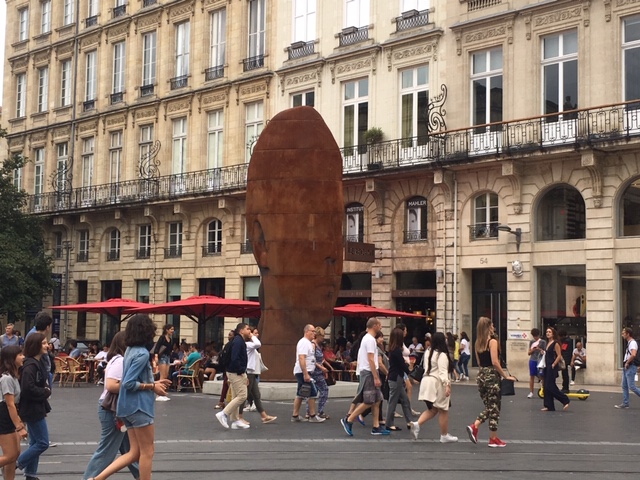 Bordeaux has been on my and our wish list for a while, so Danny and I visited in September 2019. Unfortunately we only had an afternoon, a full day and a morning. So we had to ‘speed things up’.

After arriving from Antwerp and Marne-la-Vallée at Bordeaux-Saint-Jean railway station, we purchased a 48 hour Bordeaux City Pass granting us museum entries and includes travel on trams and busses. There’s also a 24 hour and a 72 hour formula.

“Bordeaux is considered a very tolerant and relaxed place – no one will bother you about your political beliefs, religion, or sexual orientation. The cultural, artistic, and music scenes are very vibrant. The city was ruled by the English for a long time, which is why Bordeaux seems to have an ‘English flair'”, Wikitravel writes.

We could see this English influence in the Musée national des douanes or National Customs Museum, which we briefly visited on Saturday afternoon after checking in at our hotel.

The InterContinental Bordeaux Le Grand Hotel also has this English flair with an interior which would fit London palaces such as Kimpton Fitzroy and features Le Pressoir d’Argent by Gordon Ramsay and Le Bordeaux also by Ramsay.

Thirdly we learnt about English influence at La Cité du Vin or The City of Wine, which we visited on Sunday.

After relaxing at the hotel pool we had a very nice turbot (fish) at Le Petit Commerce. Better make a reservation.

On Sunday we concentrated on the Bacalan area of Bordeaux, which has for me an Antwerp ‘t Eilandje vibe. After visiting the wine museum we passed through Les Halles du Bacalan and walked all the way to the Base Sous-Marine which is a photography museum. We found it t be disappointing there’s isn’t an old German sub.

The Musée Mer et Marine is quaint but honestly unimpressive. A nice one to do if you stay longer in Bordeaux.

My pedometer (yes that’s how the app is called) skyrocketed that day so afterwards we walked back to Les Halles and took a tram to the hotel, where we stayed, dining at Le Bordeaux.

On Monday morning we briefly walked to the Cathédrale Saint-André (Saint Andrew’s Cathedral), to the Tribunal de Grande Instance and back to the hotel.

A few hours later we would be on a train heading to Marseille.

Although we didn’t stay long, we enjoyed Bordeaux and its relaxed vibe. Wikitravel is right. I see myself returning for a longer stay.

What are your thoughts on Bordeaux?