To escape the grey and wet Belgian wintery weather Gillis and I went for a short break in Southern France. We would be staying 5 nights in Avignon and use it as a base for discovering the region and cities like Arles, Orange and Nîmes.

To get there we travelled by train. As during the winter timetable there was only a direct TGV from Brussels to Avignon leaving Brussels at an ungodly 6AM, we decided to travel at a more civilised 10:30AM and change trains in Lyon. As a way to treat ourselves (and because there was only a minor price difference) we decided to travel in first class.

The TGV we would be travelling on was bound for Marseille and was operated by a TGV Réseau unit, capable of running in Belgium. I like the fact that despite its older age it still is a single deck unit, providing more space to stow your luggage with a big luggage rack above your seat.

They were built in 1994-1996 and refurbished in 2008-2009 using a design of French designer Christian Lacroix. Our unit still sported the ‘old’ typical blue TGV colours which are now in the process of being replaced by the new grey-carmillon colours and the new inOui brand. 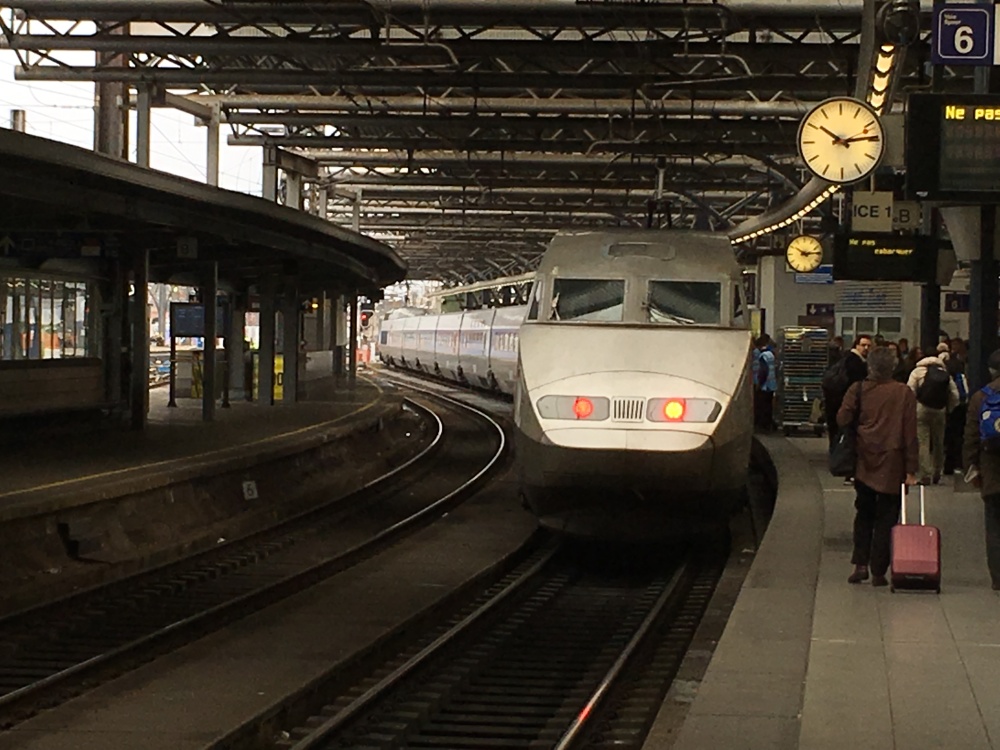 As the last refurbishment was already 10 years ago there was some wear and tear visible and the recline of my seat was broken, making it slide up and down the entire time without having a possibility to fix it one position.

Every seat featured a large fold down table and a separate fold down cup holder, a power plug under the seat in front of you, a litter box under your seat and an adjustable footrest. One remarkable design feature of the Lacroix design is the inversion of the use of colours, while normally first class uses warm tones like red and yellow and second class uses cold colours like blue and green the Lacroix design uses grey and green in first class and purple and orange in second class.

The trip itself was very smooth, it being one of the few Brussels to France TGV’s not calling in Lille Europe we reached the first stop of Paris CDG 2 TGV after a 2 hour non-stop run over the Belgian Line 1 and the French LGV Nord.

In CDG we coupled to a domestic TGV for the rest of the journey and our Belgian Crew was swapped for a French one.  After a short stretch of LGV interconnexion we stropped at Marne-la-Vallee Chessy (for Disneyland), after which we entered the LGV Sud-Est (The First French High Speed Line) for a non-stop run to Lyon Part-Dieu.

The first part of the scenery is quiet boring but as we were nearing Lyon the landscape got hillier and provided for some nicer views outside. 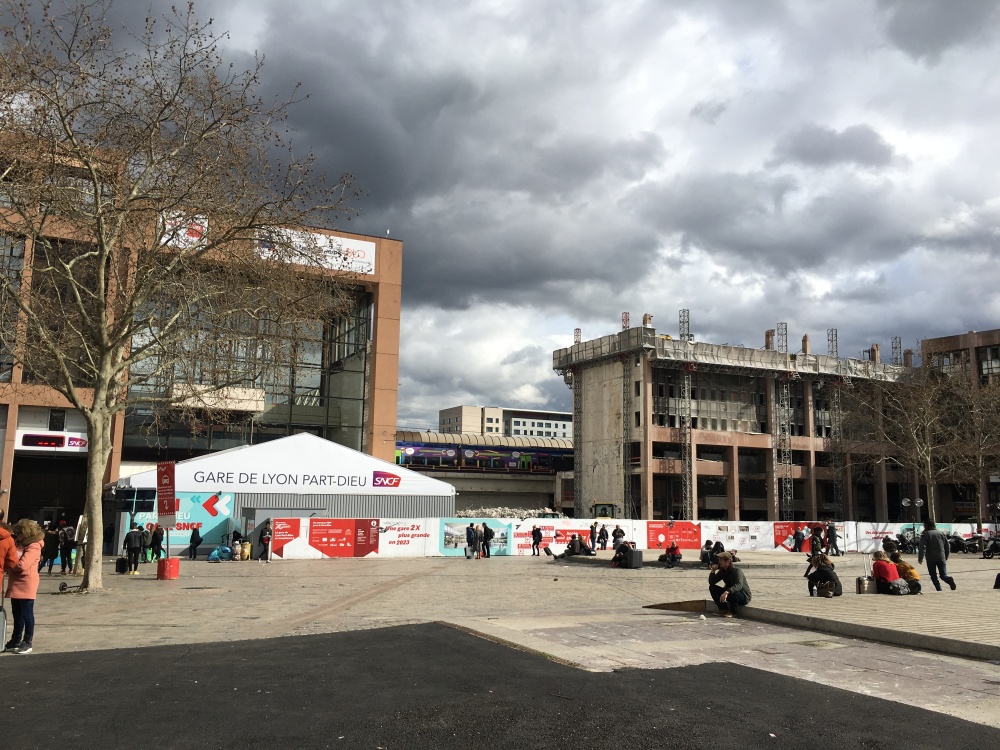 In Lyon we had 1 hour and 20 minutes to change onto a Regional TER (Train Express Regional) service taking us onwards to Avignon. As the station is currently under reconstruction it is an overcrowded construction site and not the nicest place to stay for a connection.

We decided to walk to the adjacent shopping centre to pass our time, unfortunately as it was a Sunday all shops where closed and there was not much to entertain us with. After grabbing a sandwich and a drink form the shop in the station we were very happy when our train was announced and we could board. 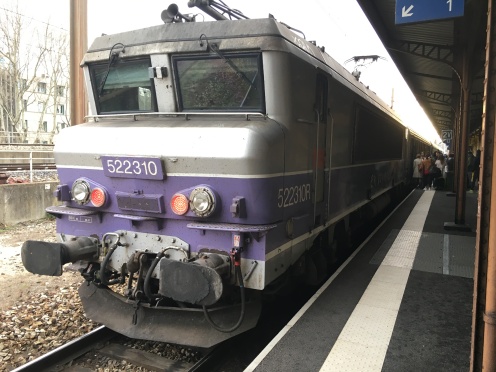 Our TER train was formed of a set of Corail coaches in a push-pull configuration with the driving trailer in front of the train with a ‘Nez-cassé’ locomotive pushing it from the rear. Despite the train being one of the few French TER services having 2 classes we travelled in 2nd class as my French ticket only allows for 2nd class travel.

The Corail coaches clearly still show their international mainline heritage and offer comfortable seating in either compartments with a side corridor, or open coaches like the one we travelled in. Every seat pair had a power plug under the window and while there are attachments to attach a garbage container along the wall too, most seats container had disappeared. 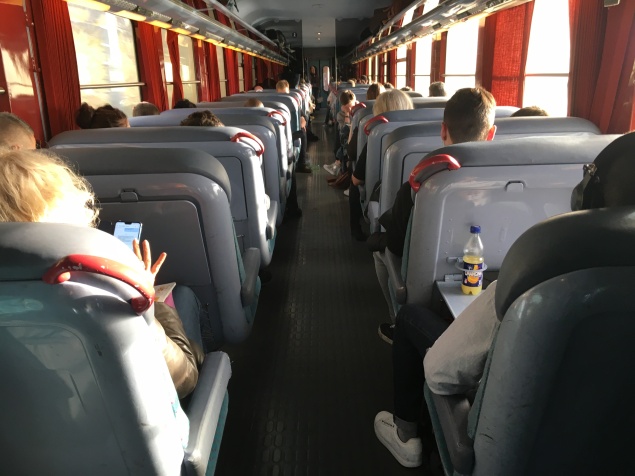 The routing of the train took us over the old Paris to Marseille mainline along the Rhone River Valley. If you go and sit on the right hand side in the direction of travel you can get some nice views from the scenery along the route.

Unfortunately SNCF clearly hadn’t washed the windows of the train for a very long time so the accumulated dirt on the window made for some difficult viewing and even more difficult photographing. The major stops on the route where Valence and Orange but the train also stopped at a number of smaller towns along the way. The advantage of taking the TER down from Lyon was that it stopped in the Avignon Centre station, just walking distance from the city centre and our hotel the Mercure Avignon Palais des Papes. 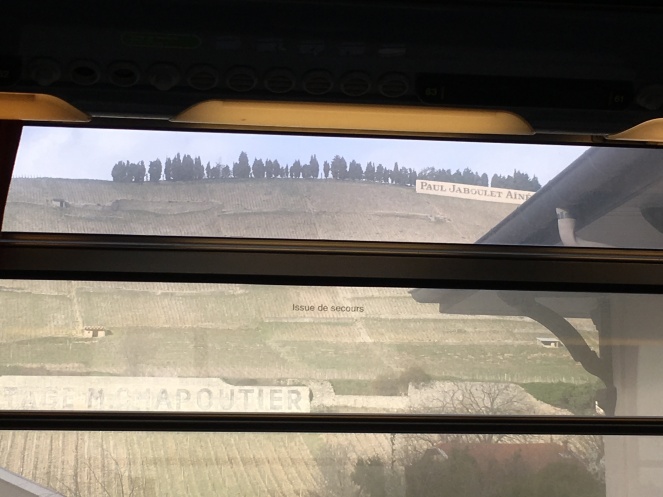 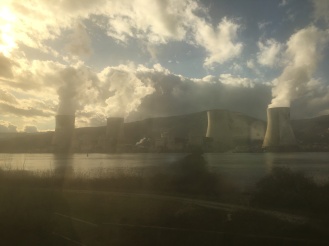 For our return journey we could use a direct TGV service from Avignon to Brussels. But as the TGV was leaving from the new greenfield Avignon TGV station along the LGV Mediteranee line we had to use a shuttle train from the Avignon Centre station towards the TGV station.

For this short 6 minutes hop they used a single class AGC unit, coming inbound from Carpentras. The AGC units are used all across France for several TER services and are very multifunctional thanks to their multi-voltage capabilities and diesel generator enabling them to run on all lines.

In the train you have the Quiet compartments on the far end of the unit adjoining the drivers cab. In the middle you have 1 multifunctional compartment where you can put bikes, wheelchairs and strollers as well as 2 different toilets and a number of normal 2nd class seats. 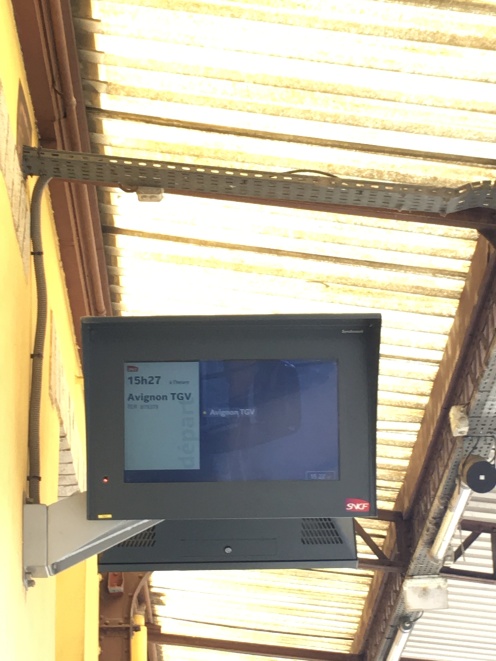 Upon arrival at Avignon the train called at one of the 2 bay platforms for regional trains adjacent to the southbound TGV platform, all of which were covered by a simple canopy. As our onwards TGV would be leaving from the northbound platform at the other side of the through tracks we headed down the slope to the underpass and crossed under the tracks. 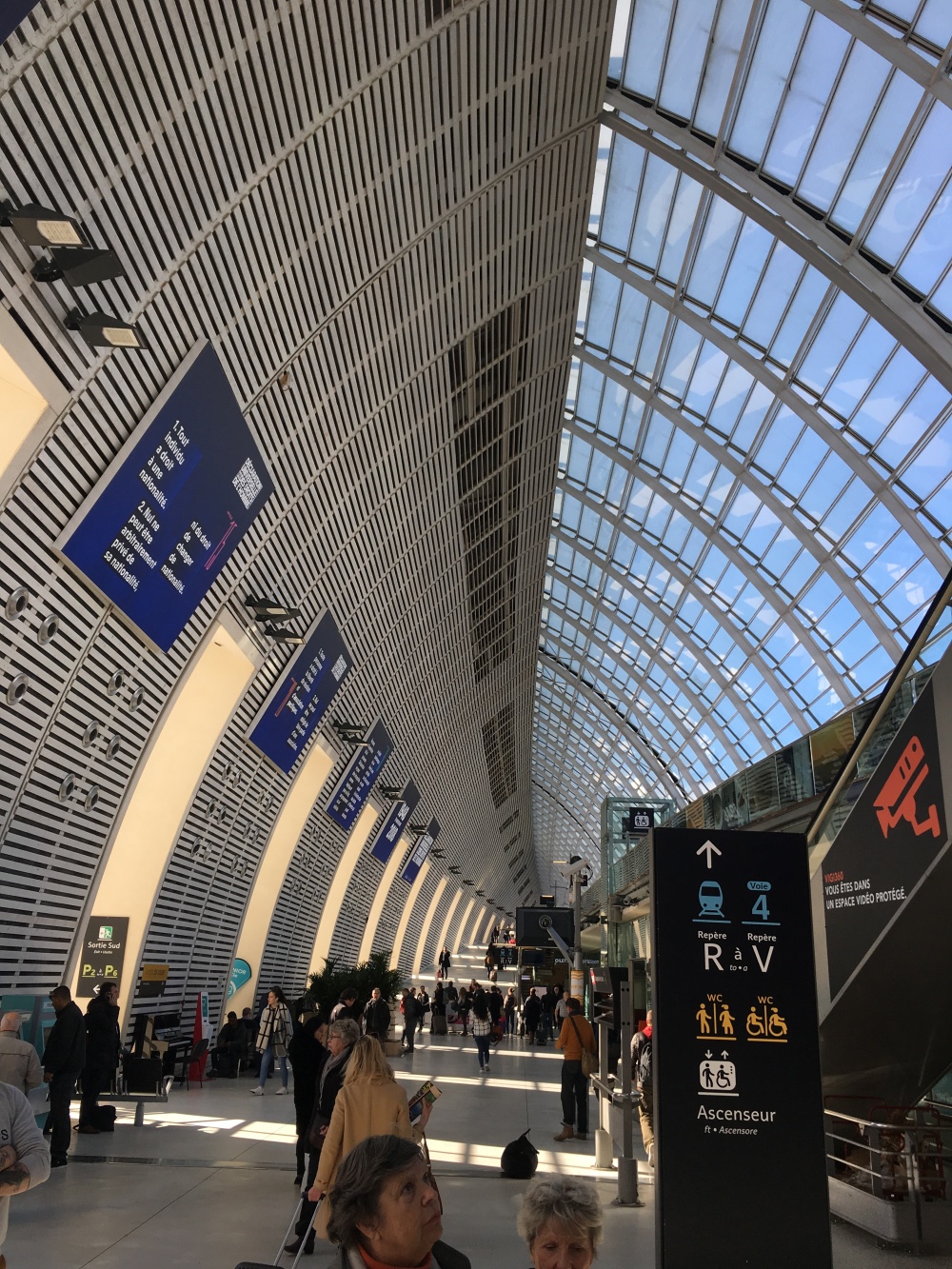 The northbound side of the station features an enormous cathedral like building with shops and services on the ground floor.

There are 2 slopes leading up to platform level at either side of the underpass and your tickets are checked before you can enter the slopes.

On the upper level there is a glass wall running the full length of the platform with several doors leading outside indicated by a letter, on the train composition information panel you can check at which door your coach is assigned to stop.

As in between doors there are a number of seats to wait on you can wait in the air-conditioned hall until your train is announced arriving at the platform, this is nice when it is cold outside and even more so when the outside temperatures are scorching hot here in summer.

The train taking us back home was another TGV Réseau set, this time we were assigned a seat around a table of 4 with 2 strangers sitting across from us. This was not as pleasant as this did not allow us to stretch out our legs.

The first part on the LGV Mediterranee up until Lyon was quite scenic and you could see the different castles on top of the hills along the Rhone valley. In Lyon our train was coupled to a different unit coming from Montpellier and after some technical problems we left Lyon 10 minutes late.

The rest of the trip was a carbon copy from our inbound trip with the exception that this time around we did call at Lille-Europe and reversed there for the last remaining stretch to Brussels.

All in all we had a very nice trip and the train definably is a civilised way to travel to the South of France.

Dir you ever travel on TGV? And how was your experience? Let us know in the comments below!